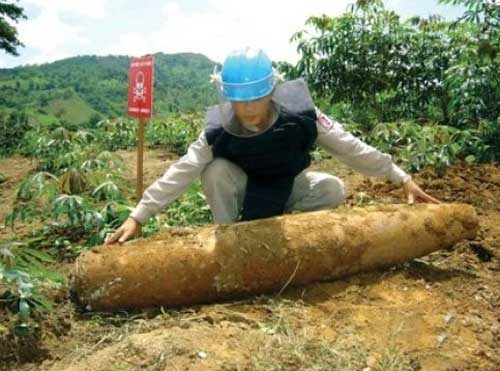 US Senator Tammy Baldwin’s bill recognizes the refugee and immigrant communities who supported and defended the United States Armed Forces during conflict in Southeast Asia.

WASHINGTON, D.C. – U.S. Senator Tammy Baldwin, a member of the Senate Appropriations Committee, introduced legislation today to authorize funding for humanitarian assistance programs, including for the clearance of unexploded ordnance and other explosive remnants of war, in Vietnam, Laos and Cambodia. The Legacies of War Recognition and Unexploded Ordnance Removal Act also recognizes the refugee and immigrant communities from those countries, including the Hmong, Cham, Cambodian, Iu-Mien, Khmu, Lao, Montagnard and Vietnamese Americans who supported and defended the United States Armed Forces during the conflict in Southeast Asia.

“Americans owe a debt of gratitude to the refugee and immigrant communities from Vietnam, Laos and Cambodia for their service and sacrifice during the deadly conflict in Southeast Asia. We must honor their efforts and work to do right by those who are still suffering from the consequences of war,” said Senator Baldwin. “I’ve heard from countless folks in Wisconsin and I’ve met with landmine survivors in Vietnam, and it’s clear we need to do more to correct the tragic legacies of war remaining from this conflict, including clearing the unexploded ordnance and other explosive remnants that remain throughout these countries. My legislation takes a strong step in honoring the sacrifice of so many, providing financial support for humanitarian assistance programs, boosting demining and UXO removal efforts in these nations, and recommitting to moving forward together.”

Long Lor, who is the Board President of the Hmong American Center, Inc. in Wausau, Wisconsin, was a child in Laos during the conflict in Southeast Asia who came to America as a refugee for safety. He said, “As a Hmong leader serving the community, I have heard stories that the Hmong and other Southeast Asian war survivors do not get the recognition that they deserved in defending America. I truly believe that this recognition would be a powerful message to the people of Southeast Asian descent and war survivors. I applaud Senator Baldwin’s leadership and commitment to helping our Hmong and Southeast American communities strengthen our relationship and healing those that felt unappreciated.”

“As a child in Laos, I was taught to walk on well-worn paths to avoid unexploded bombs left over from the Secret War my parents survived. Today, I’m proud to lead Legacies of War’s efforts to support bomb clearance and survivor assistance so that children can live and play in safety. We are thankful to Senator Baldwin’s leadership for introducing the Legacies of War Recognition and Unexploded Ordnance Removal Act. This tragic legacy must end so that new ones may begin,” said Sera Koulabdara, Executive Director, Legacies of War.

“While the Vietnam War has been over for decades, U.S. legacy ordnance from this conflict and other explosive contamination continues to plague communities in Laos, Cambodia, and Vietnam. We at HALO are grateful for Senator Tammy Baldwin’s leadership in introducing the Legacies of War Recognition and Unexploded Ordnance Removal Act, and hope to see this crucial legislation enacted,” said Chris Whatley, Executive Director of The HALO Trust (USA).

“The global MAG team is thrilled that this historic Bill is being introduced, and we welcome the increased commitment to addressing the explosive legacy of war in Southeast Asia. This Bill will help bring a lasting peace to communities living with the daily threat from explosive remnants of a conflict that ended more than 40 years ago. We are grateful for Senator Tammy Baldwin’s leadership in introducing this crucial legislation,” said Jamie Franklin, Executive Director, Mines Advisory Group (MAG) America.

Many among the Hmong, Cham, Cambodian, Iu-Mien, Khmu, Lao, Montagnard and Vietnamese communities fought and died with United States Armed Forces during the conflict in Southeast Asia in the 1960s and 1970s while suffering high rates of casualties—often with little or no recognition. Members of those communities saved thousands of lives by evacuating allied refugees and rescuing United States pilots shot down in enemy-controlled territory. For their support of the United States during the conflict, members of those communities faced immense persecution from their host countries with more than three million people being forced to flee and seek refuge in other countries.

More than 40 years after the end of the Vietnam War, unexploded ordnance (UXO) from numerous conflicts continues to cause casualties in those countries. Vietnam has suffered an estimated 105,000 casualties from explosive hazards since 1975, with UXO still scattered across much of the country. Laos is the most heavily bombed country per capita in the world and much of the country’s land remains contaminated with more than 80,000,000 small, unexploded cluster munitions. Cambodia has experienced one of the highest rates of landmine and UXO casualties in the world. 64,000 Cambodians have been killed or injured by unexploded ordnance UXO and other explosive remnants of war since 1979, with an average of one casualty every week.