Len, A Lawyer in History 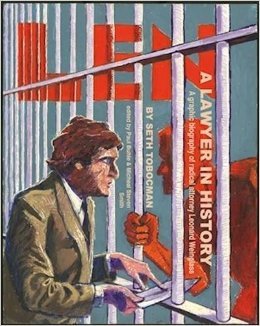 In his non-fiction graphic work, Len, A Lawyer in History, Seth Tobocman brings us a welcome celebration of the life of the relatively unknown, but important lawyer, Leonard Weinglass who reveled in defending people against the “machinery of the state.” Weinglass was the attorney in famous court cases including the Chicago Conspiracy and Pentagon Papers trials, as well as lesser known, but still landmark cases.   The son of a New Jersey pharmacist, who played high school football, joined ROTC in college, and graduated from Yale Law School, Weinglass was not obviously programmed to become a defender of activists and revolutionaries. But experiences in the Air Force and in Newark radicalized him and led him to become a powerful advocate for those often marginalized by the powers-that-be.

Len vividly brings to life events that have likely receded into the memories of baby boomers, while making these events accessible for readers too young to remember. The 1967 Newark protests remind us that police misconduct and violence against people of color are not new phenomena. The most extended chapter evokes the 1969 Chicago Conspiracy trial, deftly illustrating the personalities and political perspectives of the defendants: Bobby Seale, Dave Dellinger, Tom Hayden, Rennie Davis, Abbie Hoffman, Jerry Rubin, John Froines and Lee Weiner. As for the depth of the conspiracy, Abbie is famously quoted: “We couldn’t agree on lunch.” Judge Julius—mistakenly referred to at one point as Elliot—Hoffman is also pictured as the foil from central casting for the defendants’ creative and gutsy political theater. Tobocman rightly notes that it was Weinglass’s well-crafted appeal that led to the overturning of the convictions of all the defendants. He also points out that the Chicago demonstration in its variety of styles and tactics set precedents for future protests that are still debated. I must, however, quibble with his assertion that it was Hayden’s mobile tactics that led to the convergence of people around the Hilton Hotel on Michigan Avenue on the last day of the Democratic Convention. In fact, the mobile ‘guerilla’ groups had spread around the Chicago Loop, while the larger crowd initially pulled together by Dave Dellinger found its way out of Grant Park onto Michigan Avenue by outflanking the police cordon.

Perhaps Weinglass’s most significant case was the Pentagon Papers trial in which he defended Anthony Russo who, along with Daniel Ellsberg, had leaked the top secret and damning documents which exposed the sordid history of US policy toward Vietnam dating back to the 1940s. I wish that in providing background to the case Tobocman had referred to the Vietnamese opposition by their actual name, the National Liberation Front (NLF), rather than the derogatory American-centric term Viet Cong. In any case, he fails to explain to a new audience how the Vietnamese opposition emerged, developed, and expanded its strength among the Vietnamese people. He does an excellent job of describing Ellsberg’s evolution from a staunch Cold Warrior to a brave whistle-blower. And he shows how Weinglass’s appeal to the Supreme Court for the release of a wiretap meant a delay, which led to the entanglement of the Pentagon Papers case with the emerging Watergate investigation (involving a burglary of Ellsberg’s psychiatrist’s office, among other crimes). The result was a dismissal of all charges, including treason. Tobocman further connects the efforts of Ellsberg and Russo to contemporary whistleblowers like Chelsea Manning.

Tobocman also excels at relating stories such as the case of Jimi Simmons, from the northwestern Confederated Tribes of the Grand Ronde and his support person and later wife, Karen Rudolph. Simmons, whose father lost his tribal position due to federal termination policy, was passed through the foster care and eventually the prison system, finally ending up in Walla Walla State Prison in Washington. He was accused, along with his brother George, of murdering a prison guard. Amazingly enough Jimi–due to the strength of his support committee, his own staunch integrity, and Weinglass’s brilliant lawyering–was acquitted, though his brother committed suicide during the trial.

In 1986, students at the University of Massachusetts were arrested for a sit-in opposing CIA recruitment on campus. Abbie Hoffman makes a return appearance along with Jimmy Carter’s daughter Amy. Lawyers, including Wineglass, employed the ‘necessity’ defense—that it is justified to commit a crime to prevent a graver crime. This allowed for the introduction of evidence detailing the history of the CIA covert action (‘dirty tricks’) in Vietnam and Nicaragua, as well as its disregard for any Congressional action seeking to rein in such activities. Among many others, Ellsberg testified. The jury was convinced of the ‘necessity’ defense and acquitted the protestors.

In the last part of the book, Tobocman shows how the government’s reaction to 9/11 led to what amounted to the granting of the surveillance powers that Nixon was unable to obtain in the 1970s. In the post 9/11 period, Weinglass took on the defense of the Cuban 5, who had been sent by the Cuban government to investigate the activities of anti-Cuban terrorists operating out of Miami. The American government accused them of espionage and conspiracy to commit murder. After a favorable verdict in a first appeal, the Bush administration intervened. While working on the case, Weinglass was diagnosed with cancer and didn’t live to see the release of the last 3 of the Cuban 5 with the re-establishment of US/Cuban diplomatic relations in 2014.

These are just a sample of the numerous significant cases that Weinglass took up. There was not space in this book for all of them. Tobocman’s book reminds me of the abuse of the concept ‘role model’, which generally means someone who has made a lot of money. Len is a different sort of a role model. At one point he confesses to earning a mere $17,000 a year. Len is someone who recognized the evils around him and through conviction, smarts, and persistence, fought hard to make a positive difference. So I welcome Tobocman’s efforts to graphically introduce us to Leonard Weinglass’s splendid model of a life dedicated to social justice. Check it out and buy one for a young friend.