The Lies of War (Films): Burns, Novick, and The Vietnam War 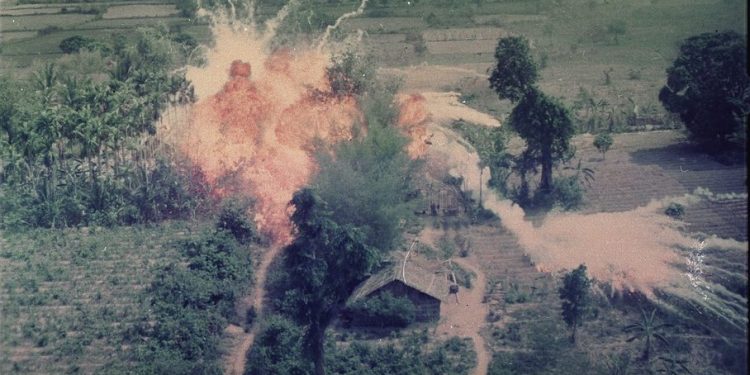 Photo: Napalm bombs being dropped in Vietnam. Credit: Public domain (Wikimedia Commons)
This spot-on review essay by Michael Foley was published by Taylor & Francis Online, April 30, 2018. It’s well worth the time to go there to read the whole essay.

There is no single lie in war (films): Ken Burns, Lynn Novick, and The Vietnam War

Most everything one needs to know about Ken Burns’s and Lynn Novick’s epic interpretation of the Vietnam War is evident in their summary of the conflict in the film’s eighteenth and final hour. “The Vietnam War was a tragedy, immeasurable and irredeemable,” declares narrator Peter Coyote. “But meaning can be found in the individual stories of those who lived through it: stories of courage and comradeship, and perseverance, of understanding and forgiveness and, ultimately, reconciliation.” Moments later, the series concludes with the filmmakers’ admonition, channeled through The Beatles, that we, the American viewers, need to “Let It Be.”

Burns’s and Novick’s unsubtle message is that they have just given us their definitive film history of the Vietnam War, that we have now learned enough from the “meaning” found in “the individual stories” to see that the war was, in essence, a “tragedy.” Armed with this knowledge, viewers should be prepared to “let it be,” to put the war behind them, at last. In an interview, Burns said the film’s use of “Let It Be” is “about an ultimate reconciliation” that he hoped the film could facilitate. After 10 episodes of toggling between deeply affective personal stories and overly simplistic analysis of wartime policy and politics, it is hard not to worry about how many millions of PBS viewers fell for this “ultimate reconciliation” charade.

One certainly cannot accuse Burns and Novick of failing the test of the famous antiwar priest, Daniel Berrigan, to “know where you stand, and stand there.” By Berrigan’s measure, citizens had a responsibility to be informed about and to stand either for or against the Vietnam War, stand either for or against peace. Burns and Novick reject any such choice, but they certainly know where they stand: above us. And, boy, do they stand there, talking down to the audience the way parents speak to children who ask too many questions. Ian Parker, profiling Burns recently in the New Yorker, describes the director’s “default conversational” mode as “Commencement Address.” No wonder.

For all their desire for historical and moral clarity, Burns and Novick give us a version of the Vietnam War that is as muddy as the Mekong River. The promotional material stresses the banal point that “There is No Single Truth in War.” Yet problems of proportion, emphasis, and voice obscure many of the central questions surrounding the war – the very questions that must be resolved if the nation is ever to achieve the kind of “ultimate reconciliation” the filmmakers seem to promise.

Michael Stewart Foley is University Professor of American Civilization at Université Grenoble Alpes in France. Contact the author at Michael.foley@univ-grenoble-alpes.fr

For anyone wanting a more thorough, truthful picture of the American War in Viet Nam than what Ken Burns and Lynn Novick have managed in their 18-hour documentary, we suggest reading selections from Foley’s article’s bibliography: