Muhammad Ali on the Vietnam War-Draft

This information originally appeared at aavw.org. 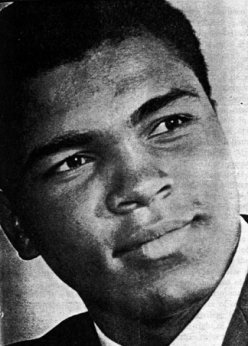 On August 23, 1966, Muhammad Ali embarked on the biggest “fight” of his life when he applied with the Selective Service for conscientious objector status on religious grounds (as a minister with the Nation of Islam). In what became an extensive legal, political, professional, and personal battle, Ali was convicted of draft evasion, stripped of his boxing title, and became a lightning rod — and a voice — for opinions on the Vietnam War. Muhammad Ali’s willingness to speak out against racism in the United States, and the affect it had on domestic and foreign policy, earned him many supporters and detractors. In 1971, nearly five years after it began, Ali’s legal battle finally culminated with a unanimous decision (8-0 with Thurgood Marshall abstaining) by the United States Supreme Court overturning his draft conviction. The following resources document his struggle, his views, and his influence.

“No, I am not going 10,000 miles to help murder kill and burn other people to simply help continue the domination of white slavemasters over dark people the world over. This is the day and age when such evil injustice must come to an end.”—Muhammad Ali Source: “Muhammad Ali — The Measure of a Man.” (Spring 1967). Freedomways, 7(2), 101-102.