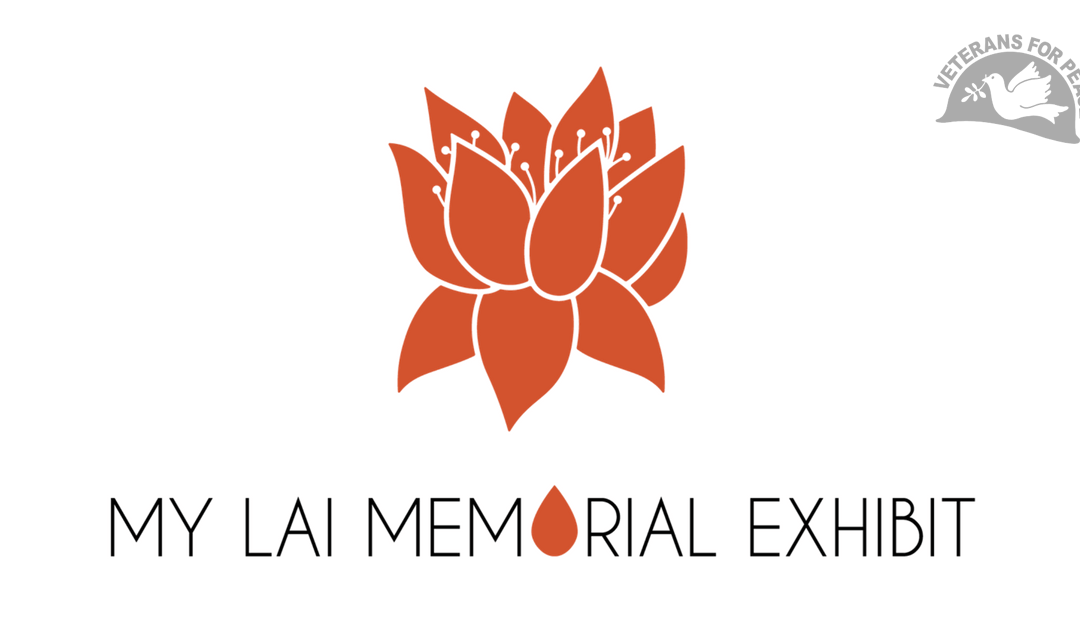 This exhibit is a response to President Obama’s call to “look forward instead of looking backward” when it comes to dealing with American crimes. Refusing to look backward blinds us to history, serves to legitimize old crimes, and allows us to treat any exposed atrocity as an anomaly, something new and unprecedented for America. Not looking backward therefore shapes how we look forward. Let us begin by examining how the American establishment has failed to come to terms with the meaning of the American war in Vietnam by a calculated process of reframing which has served to distort the reality of that war.

Bemoaning what the ‘powers-that-be’ termed the “Vietnam syndrome”—which they saw as undermining people’s motivation to fight wars around the world—they sought to reinvigorate Americans’ appetite for war after the Vietnam disaster. By the 21st century, they had succeeded in normalizing ongoing and unending war to the point where it almost escapes our notice. What brings the establishment together nowadays (many Democrats, as well as Republicans) is fear of US withdrawal from war around the world.

Even before the war ended, Richard Nixon initiated another re-framing of the war. By focusing on POWs and MIAs, he managed to divert popular attention from the unpopular war, which had resulted in their capture or disappearance in the first place. Nixon succeeded in turning them into beleaguered heroes still being held by a demonic enemy.

In a parallel way, Barak Obama in 2012 initiated a 50th year war commemoration as part of a rehabilitation of the war:

As we observe the 50th anniversary of the Vietnam War, we reflect with solemn reverence upon the valor of a generation that served with honor. We pay tribute to the more than 3 million servicemen and women who left their families to serve bravely, a world away… They pushed through jungles and rice paddies, heat and monsoon, fighting heroically to protect the ideals we hold dear as Americans. Through more than a decade of combat, over air, land, and sea, these proud Americans upheld the highest traditions of our Armed Forces.[i]

Ostensibly antiwar documentaries such as the over-hyped Burns & Novick The Vietnam War have similarly spotlighted American soldiers as the true patriots, lied to by deceitful politicians and manipulative brass, but still doing their duty. American soldiers—though of course sometimes brave and indeed victimized by government policy—became defined as the primary victims of the war; supposedly spat upon by protestors, not welcomed home by society as a whole, as well as sacrificed in a contested war. Adoration of the military; not love of democracy or equal rights advocacy, has become the hallmark of patriotism. Just watch any American sports event.

This America-centric focus functions to divert attention from the horrors inflicted upon the Vietnamese people. Accurate estimates are hard to come by, but as many as three million Vietnamese were likely killed, including two million civilians, perhaps 5 million civilians injured and disabled, millions more internally displaced, croplands and forests destroyed by carcinogenic herbicides like Agent Orange: incredible destruction – physical, environmental, institutional, and psychological, that endures to this day. “The United States Air Force dropped in Indochina, from 1964 to August 15, 1973, a total of 6,162,000 tons of bombs and other ordnance . . . This tonnage far exceeded that expended in World War II and in the Korean War.” [ii] The term ecocide was coined to try to capture the devastation of the Vietnamese landscape. As Nick Turse has shown[iii], the attack on civilians was in fact a direct product of American strategy. U.S. troops were unable to distinguish civilian Vietnamese from fighters. All Vietnamese, as a matter of course, were referred to as “gooks”. So the distinction between combatants and non-combatants, which had been eroding throughout 20th century warfare, virtually disappeared.

What made the war tragic for the ‘powers-that-be’ was not the carnage and social disruption inflicted upon the Vietnamese, but the resulting demoralization of the military. In line with this disturbed world-view, what has now almost entirely disappeared from public memory was the unprecedented resistance to the war inside the military. Let me spell this out.

Col. Robert D. Heinl wrote in 1971 in the Armed Forces Journal that “by every conceivable indicator our army that now remains in Vietnam is in a state approaching collapse, with individual units having refused combat, murdering their officers and non-commissioned officers, drug-ridden, and dispirited when not near-mutinous.”[iv] There were over 400 antiwar underground newspapers circulated among GIs. And there were over half a million reported incidents of desertion [(503,926 to be exact).].[v]

“All across the military active duty service members were engaging in acts of dissent and resistance. A 1970 social science survey of soldiers at several military bases in the U.S. found that one quarter of the interviewees admitted to engaging in acts of dissent, defined as participating in a protest, reading a GI antiwar newspaper or going to an antiwar coffeehouse.”[vii]

The sharpest “indication of the breakdown of the armed forces was the prevalence of fragging, an attack with a grenade[viii] on American officers and noncommissioned officers.[ix]. The Army began keeping records on assaults with explosive devices in 1969. By July 1972, the total number of fragging incidents had reached 551, with 86 fatalities and over 700 injuries.[x]

Figures supplied to the House Internal Security Committee investigation of subversion within the military listed 488 acts of “damage or attempted damage” in the Navy during fiscal year 1971, including 191 incidents of sabotage, 135 arson attacks, and 162 episodes of “wrongful destruction.”[xi] The House Armed Services Subcommittee investigating disciplinary problems in the Navy disclosed “an alarming frequency of successful acts of sabotage and apparent sabotage on a wide variety of ships and stations.””[xii]

The resistance was largely, though not exclusively, Black-led. Institutionalized racism in the military, the rise of black consciousness, and widespread antiwar sentiment—articulated not just by Muhammad Ali and Martin Luther King—led to Black GIs creating solidarity groups all over Vietnam, on navy ships, and on American and European bases, as well, as [they] banded together to oppose the war and defend themselves against harassment and discrimination.”

“Never before in modern history had the American armed forces faced such widespread internal revolt. Hundreds of thousands of soldiers, marines, airmen and sailors dissented and disobeyed military commanders, often at grave personal risk, to speak out for peace and justice.”

This exhibit on the reality of the My Lai massacre allows us to perceive the sinister workings of the American war, not as an aberration but as a graphic signpost. Nick Turse laments that the sheer scale of the massacre has served to blot out the hundreds of other reported atrocities committed in Vietnam. But confronting it in ‘the here and now’ can open up a space to face its horror and other horrors, as well. It is telling that Ken Burns rather than calling the massacre “murder”–as it was originally described in the script–felt compelled to switch the script to read that “the killing of civilians has happened in every war.” [xiii] This is classic euphemistic avoidance, which grants permission to look away, to normalize what is not normal, both atrocity and war itself.

Some soldiers at the time did not dismiss the My Lai massacre as normal. Hugh Thompson and his helicopter Hiller OH-23 Raven crew, Glenn Andreotta and Lawrence Colburn, viewing the massacre from the air, stopped a number of killings by threatening to shoot American soldiers. Additionally, Thompson and his crew saved a number of Vietnamese civilians by personally escorting them away from advancing United States Army ground units and assuring their evacuation by air. Thompson reported the atrocities by radio several times while at Sơn Mỹ. Although these reports reached Task Force Barker operational headquarters, nothing was done to stop the massacre. After evacuating a child to a Quảng Ngãi hospital, Thompson angrily reported to his superiors at Task Force Barker headquarters that a massacre was occurring at Sơn Mỹ, which finally resulted in order to stop the massacre. Instead of being honored as a hero, Thompson was ostracized for many years until finally receiving the Soldier’s Medal in 1998. It is also worth remembering that despite the frantic cover-up, it was a veteran, Ron Ridenhour whose valiant efforts brought the massacre to public light and who, in contrast to Burns, termed My Lai, “an operation, not an aberration.”

So finally, what is an alternative understanding of the war that is better suited to preventing future crime than the establishment narrative? In brief:

And a final lesson:

If we replace hard earned historical truth with self-serving myth, we not only repeat our crimes, but also become inured to them. This exhibit is not easy to look at, but engage we must. Let’s not let the ‘powers-that-be’ get away with any more murder.

[iii] Nick Turse, Kill Anything That Moves: The Real American War in Vietnam (2013).

[ix] Hearings Before the Defense Subcommittee of the Committee on Appropriations, House of Representatives, 92nd Congress, 1st Session, Part 9, 585.

[xii] Report by the Special Subcommittee on Disciplinary Problems in the U.S. Navy of the Committee on Armed Services, House of Representatives, 92nd Congress, 2nd Session, 17670 and 17684.