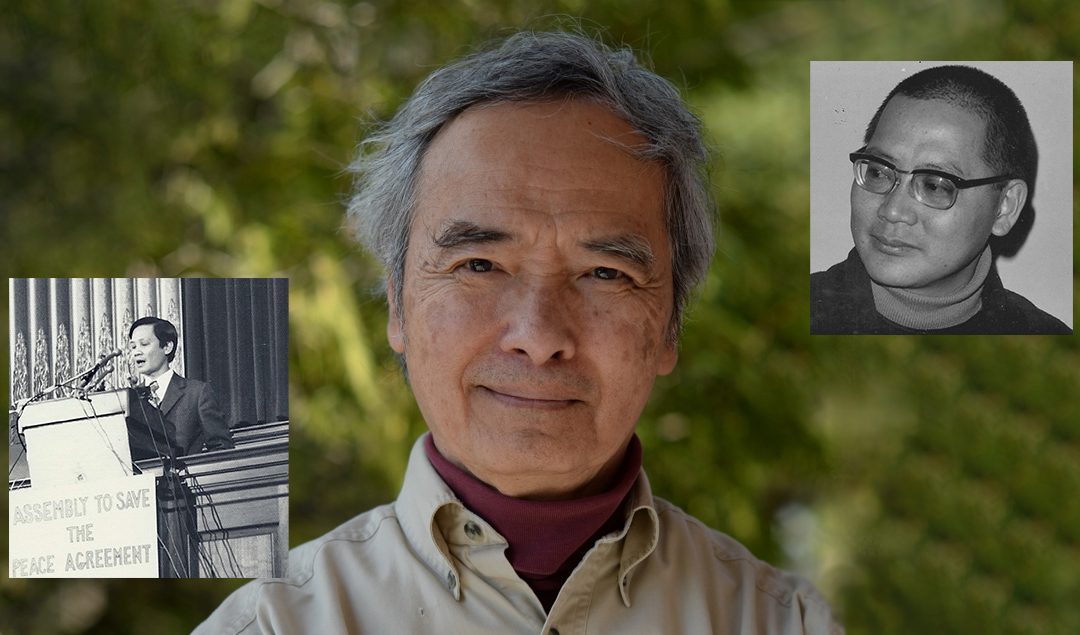 Prof. Ngo Vinh Long was a professor of history at the University of Maine. He wrote and taught on many international and Vietnam relations issues and a was a leader of the anti-war movement during the US war in Vietnam. During the Vietnam War, he once occupied the consulate of the Republic of Vietnam in San Francisco.

The news that Professor Ngo Vinh Long died in the US on October 12 due to illness came to his friends and students last night, it was shocking.

A few days ago, by email to a group of friends and intellectuals, Professor Long reported that his health was poor, making everyone very worried. Friends encouraged him, advised him to reduce his work. However, the bad news came too quickly.

His close friend – Dr. Vu Quang Viet (New York) – sadly said to his friend: Please inform Mr. Long just passed away last night. So, I guess he walked very gently, because I still talked to him in the morning and found his voice still strong.

Professor Tran Van Tho (Tokyo) shared via email: This morning, when I heard from him that his illness was serious and could not be saved, everyone hoped that the doctor would misdiagnose it. But in the end we lost him. Extremely sorry!

Ms. Pham Chi Lan (Hanoi) commented: So he worked until the last days, even though he was very tired, and passed away so quickly, so quickly, so suddenly! Brother Long, may you rest in eternal peace. I’m so sorry for you.

Professor Cao Huy Thuan (Paris) recalls: Who has once met Mr. Ngo Vinh Long can not forget his gentle, gentle demeanor and his witty and thoughtful words and smile.

Through meetings with the professor, I learned that he himself is a Saigonese, grew up in the Ban Co area in the 1950s. Even his family is a typical example of mixed blood from three regions reflecting many historical characteristics. history of the country.

His father is from Bac Ninh, his mother is from Hue, and his family moved to the South early to live. His four brothers lived in poor hamlets with thatched cottages and were trying their best to study.

According to an interview with Lao Dong newspaper in 2022, Professor Ngo Vinh Long confessed from a young age he learned English well, went to help Americans make maps throughout the South and parts of Cambodia and Laos in the early years. 1959 – 1963.

After passing the excellent baccalaureate, in 1964, he won a scholarship to study at Harvard University and although he joined the student movement against the dictator Nguyen Khanh, he was helped by the Americans he knew to get permission. leaving for school.

But as soon as he set foot on American soil, he studied and joined the anti-war movement. Dr. Vu Quang Viet – an international student in the US since 1968 and joined the movement with him – said:

Although he loves research, Mr. Long still does not forget his duty to the Fatherland! That is how to end the war, bring peace and reconciliation among the Vietnamese people. The newspaper called “Chicken Times” at Harvard was born after 1968 to mobilize Vietnamese students and students to join the movement to prevent war, with the very clear maxim “Chicken with one mother should never fight. together”.

Mr. Viet said Professor Long was one of the very few people whose books were published as a student, just four years after coming to the US. That’s the book Before the Revolution: The Vietnamese Peasants under the French published by MIT in 1968.

In 1978, Professor Ngo Vinh Long completed his doctoral thesis majoring in East Asian History and Far Eastern languages. He participates in research and teaching on East Asia and Vietnam, is a reputable expert in many scientific and international lecture halls and forums.

After the war, he returned to Vietnam many times, conducted many field trips and contributed many ideas to the country. He also taught at Hanoi National University and Hanoi National Economics University.

Since 1985, he has been a professor at the history department of the University of Maine (Maine state, USA).

In the past ten years, Professor Ngo Vinh Long and his friends who are intellectuals in many countries have participated in the founding of “Summer Workshops” in Vietnam and abroad to create more opportunities for intellectuals at home and abroad. abroad to openly discuss issues of national construction with the spirit of construction and “chickens with the same mother don’t always fight each other”.

Through Facebook, he shared many articles, confided his love for his homeland, beautiful photos of nature and people, showing not only the artist’s artistic talent but above all, the human heart of the author.

Last time, I had the honor to meet Professor Ngo Vinh Long at a Conference on the East Sea at Yale University (USA) in 2016. Professor Long and many overseas intellectuals have persistently participated in many searches. valuable historical documents and defended Vietnam’s sovereignty over the sea and islands in international forums.

I really enjoyed what he said in an interview with the press: The teacher has no money, but there is something bigger than giving up his whole life to invest in the future generations of a nation, a country, or even the whole world. That is the glory and happiness of a teacher that not every profession has. Education not only trains workers, but also trains citizens and people with high responsibilities to the nation, the country and the whole world.

Saying goodbye to Professor Ngo Vinh Long, I still have a big debt to ask him about the history of Saigon, including Ban Co village, many of whom are “compatriots” with him…

Professor Ngo Vinh Long was born on April 10, 1944 in Vinh Long province. According to information from Ms. Ngo Thi Tuong Van – the professor’s sister, he died on the morning of October 12 (New York time) in Bangor, Maine, USA.

On October 1, Professor Ngo Vinh Long also wrote on Facebook “to reassure relatives” online: “Please report to relatives and friends, why I haven’t been on Facebook for a long time. I don’t want to be on Facebook. My relatives worry for me, but the more I think about it, the more worried I don’t know.”

Professor said that from the beginning of September, his left eye suddenly became invisible, although he was tired and coughed a lot, he still tried to teach and guide graduate students. And despite his illness, he only lamented: The pain is that this autumn the leaves will be very bright, but I don’t know if I can take pictures…