Not One Emmy for Ken Burns and “The Vietnam War” 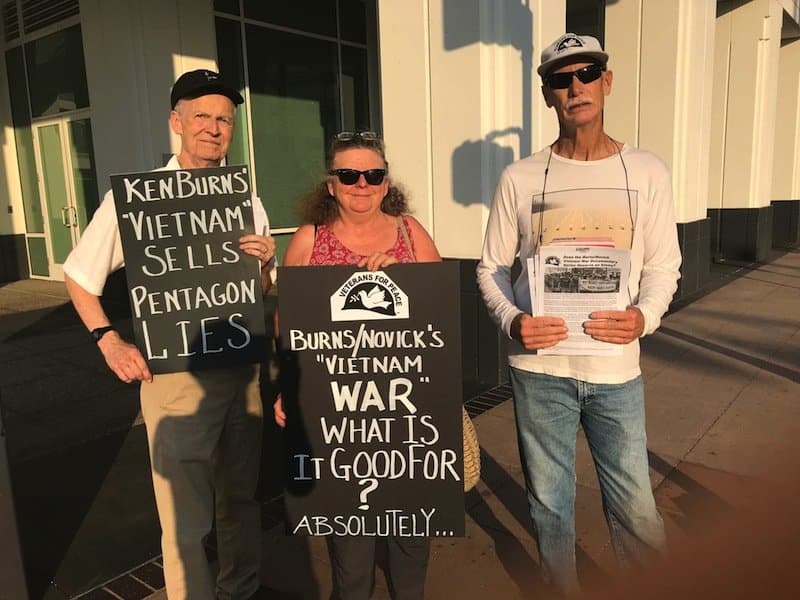 This article originally appeared at the laprogressive.com.

A Victory for Historical Accuracy and the Peace Movement

Ken Burns, branded as “America’s Storyteller,” was shut out at the Creative Arts Emmy Awards ceremony on Sunday, September 9.  Burns’s latest project, the mammoth PBS series, “The Vietnam War,” was nominated for Emmys in four categories.  One by one, through the evening, the prizes were awarded to other nominees.

It was a surprising conclusion to Burns’s quest for recognition, and canonization, of a project that reportedly cost $30 million, and which spanned 10 evenings on PBS, totalling 18 hours of screen time.

Burns’s “Vietnam” saga was co-produced and co-directed by Lynn Novick.  It premiered in September, 2017.  TV critics were almost unanimous in their fulsome approval.

A sample, from the Washington Post: “Astounding and sobering. … I’ll go so far as to call it required viewing, before you watch anything else on TV … this fall season.”

From Salon: “All of it folds together into an immersive and wrenching creation….”

And from CNN.com: “PBS has again provided Burns with a huge canvas, and he has responded by painting a masterpiece….”

The review-collection site Rotten Tomatoes gathered the appraisals of 43 reviewers and calculated a 98% Approval Rating for the “Vietnam” series.

In addition to the critical acclaim, “The Vietnam War” attracted an impressive number of viewers, especially for a public television program.  PBS claimed an average audience of 6.7 million across the ten nights of broadcast.  The premiere episode drew PBS’s largest viewership since the final episode of “Downton Abbey.”  34 million people watched at least some portion of the 18-hour documentary.

But, along with the critical acclaim and hefty audience numbers, there was some negative response around the margins of the mainline mass culture.  Online historical journals published essays questioning the historical accuracy of Burns’s version of Vietnam era events.  Some commentators objected to Burns’s refusal to assess moral responsibility for the millions of Vietnamese casualties and the massive physical destruction caused by the American military.

The organization Veterans for Peace (VFP) published personal responses to Burns’s series by a few of its members, some of them Vietnam veterans.  Unlike most of the U.S. veterans interviewed by Burns and Novick, these Vietnam veterans were highly critical of what their military had done to the people of Vietnam.  And they were highly critical of the dishonesty and the lack of moral vision they perceived in Burns’s filmmaking.

In Los Angeles, the organization Interfaith Communities United for Justice and Peace (ICUJP) decided to take action to expose the half-truths, distortions and omissions they saw in “The Vietnam War.” The group concluded that the best way to call attention to the failings of Burns’s series would be to challenge Burns and PBS’s campaign to win Emmy recognition for their series.

ICUJP reached out to Veterans for Peace and VFP quickly responded.  They  decided to create and raise funds for an advertisement to run on a full page of the weekly print version of the venerable show business trade paper, Variety.  The ad was scheduled to run in July, shortly after Emmy nominations were to be announced.

ICUJP took out an ad, in June, on LA Progressive, an online news-and-politics journal.  The ad began running before the 2-week voting period for the Emmys Nominations Round.

And both organizations worked to circulate the informed critiques which had already been published in academic and small political venues online.

Veterans for Peace and ICUJP wanted to reach the American public with their message about the grave shortcomings of “The Vietnam War.”  But they also wanted to reach the voting members of the Academy of Television Arts and Sciences, the body which confers the Emmy awards.  VFP and ICUJP knew that an Emmy gives credibility and honor—and marketing power—to television programs and their creators.  And some of Burns and PBS’s investors had already funded the distribution of “The Vietnam War” to high schools across America.

Six days before the voting in the Emmy Nominations Round began (June 11 through 25),  the Television Academy published its official bi-monthly magazine, emmy.  The issue contained a four-page article about Burns’s co-director Lynn Novick and the making of “The Vietnam War.”  The article reported favorably on the series, and could easily be seen as a free, four-page, “For Your Consideration” advertisement.  The Academy’s timing raised ethical questions, but was also an indication of the power of the Ken Burns “brand.”  Burns and Co. clearly benefitted from the article being published just before Emmy balloting.  But emmy magazine also gained stature from having such a prestigious subject as Burns’s close partner, Novick, sit for an interview and discuss their series, which happened to be a leading candidate for Emmys.

The mainstream media and the show business trade papers refused to cover the political, academic and moral controversy building around Burns and his series.  But some members of the Television Academy may have been aware of the ripples of dissent from the general political/cultural reverence for “The Vietnam War.”  Were some voters swayed, in favor of Burns and Novick, by the four-page favorable article in the Academy’s official magazine?  It’s impossible to know what they were thinking when they cast their ballots in the nominations round.

Nevertheless, the July 12 announcement of the nominees contained several surprises for those who were following the fate of Burns and his series.  Academy voters declined to give “The Vietnam War” their nominations in several important categories:

The only nominations Burns and Co. did receive were Outstanding Directing (Burns and Lynn Novick); Outstanding Writing for a Nonfiction Program (Geoffrey Ward), Sound Mixing and Sound Editing.

The nomination results could be interpreted as a rebuff to Ken Burns, Lynn Novick, and their collaborators, including Coyote, Reznor and Ross.  (Was Coyote penalized for being the voice of what many saw as Burns and Ward’s historical disinformation?)

The Veterans for Peace ad came out in Variety on July 25, two weeks after the announcement of the Emmy nominations.  The ad was headlined, “Does the Burns/Novick Vietnam War Documentary Series Deserve an Emmy?”

(Meanwhile, the publishers of LA Progressive continued to run the ICUJP ad on the front page of their news site, free of charge, making an important ongoing contribution to the counter-campaign.)

Two articles by VFP members were published on the website Common Dreams (May 31 and July 16).  Both articles questioned whether the “Vietnam” series was worthy of Emmys.  And both were republished on other internet websites: Combat Vet: No Emmy for Burns/Novick Vietnam Doc

ICUJP turned the Veterans for Peace full-page Variety ad into a letter-sized leaflet.

On July 28, the Television Academy held its annual ceremony for the awarding of local, LA-area Emmys.  Access to the grounds of the Academy was severely restricted, but members of VFP and ICUJP stationed themselves at the two driveway entrances to the grounds, holding placards and passing out leaflets.

Subsequently, the VFP/Variety leaflet  was distributed in front of the theatres of the Writers’ Guild and the Directors’ Guild, during regular membership screenings at both venues.  The reverse side of the VFP leaflet bore a message from ICUJP, calling attention to Burns’s failure to take note, in his 18-hour saga, of the role of religious groups in opposing the Vietnam War.

The History News Network, an online publishing site run by the Columbian College of Arts and Sciences at George Washington University, posted two articles which criticised “The Vietnam War,” in the context of Burns & Co.’s campaign for Emmys (August 10 and 19).  Those articles were widely shared on social media.  One was titled, “Emmy Voters: It’s time to brush up on your history.”  It provided a scholarly series of arguments criticising Burns’s version of Vietnam history.

The Final Round of Emmy balloting began on August 13.  Interfaith Communities United for Justice and Peace continued its weekend leafletting at the Directors’ Guild screenings until August 26, the day before the TV Academy’s online poll closed.

Thirteen days after voting ended, the Creative Arts Emmys ceremony began, in downtown LA’s Microsoft Theatre.  The ceremony was preceded by the Red Carpet walk along the street in front of the theatre.  It was followed by the Governors’ Ball.  In between, inside the auditorium, the nominees, their guests, and hundreds of other attendees sat through the announcements of the winners in more than forty separate categories, followed by the acceptance speeches of those winners.  At the end of the evening, Burns and his “Vietnam” comrades had nothing to show for their time.

What meaning does Burns & Co.’s defeat have for the wider world?  Why did Veterans for Peace and Interfaith Communities United for Justice and Peace struggle so persistently, and hope so fervently, for exactly this outcome?

It seems fitting to quote briefly from VFP’s message in Variety:

In this war-torn world, what is desperately needed and what Burns and Novick fail to convey is an honest rendering of that war to help the American people avoid yet more catastrophic wars. The Emmy Award is a powerful recognition of truth in art. Crowned with an Emmy, this defective history of the Vietnam era will become required viewing for generations of young Americans—a seductive, but false, interpretation of events.

And this excerpt from ICUJP’s statement the leaflet they shared with Veterans for Peace:

The first President Bush said it very well, after he launched a savage air war against Iraq in 1991. Bush proclaimed: “It’s a proud day for America.  And, by God, we’ve kicked the Vietnam syndrome once and for all.”

Ken Burns wants Americans to forget the hard, but valuable, lessons of Vietnam.

Activists for peace and justice can feel some relief that 18 hours of soft propaganda for the Pentagon and US foreign policy was not rewarded on that evening in the Microsoft Theatre.

Ken Burns and his collaborators, on the other hand, could ask themselves whether, in taking on a subject as large and complex and catastrophic as the Vietnam War, whether it was wise to ally themselves with the Pentagon and its ideologues, and whether there wasn’t a downside to accepting money from David H. Koch and the Bank of America.