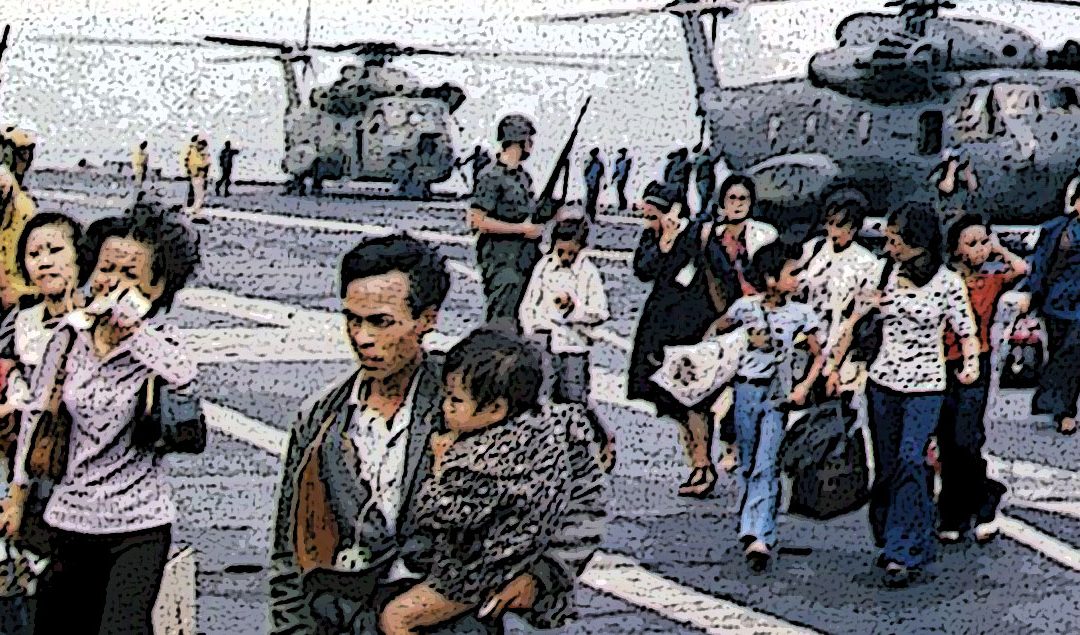 “Operation Frequent Wind was the final phase in the evacuation of American civilians and “at-risk” Vietnamese from Saigon, South Vietnam prior to the takeover of the city by the North Vietnamese Army in the Fall of Saigon.”

When the little girl looked up, she saw the wings of dragonflies; they mesmerized her. With the roar of the engine, came the sound of wind. The kind that knows no direction, the kind that follows its own circular paths. She felt the gusts furl and unfurl her hair and she felt its breath on her face. People around her hustled and shouted. Some could not pass the stone fence. They were left holding onto the edges of gates, peering through the diamond windows that framed helicopters, reaching with one’s hand through the opening to the elbow or shoulder, the extent of entrance into the other world. If one lets go of another’s hand, one may lose that person forever. She held tightly onto her mother’s hand, but, at times, the tug from the crowd to separate her hand from her mother’s as people pushed and shoved, made her think that if she relaxed the muscles in her fingers for even a split second, her hand would drift apart from her mother’s. It was finally time for the little girl to board the helicopter. When she looked down upon the streets of Saigon, she saw a sea of hands stretching towards the sky as if holding it up with desire; palms held up for gifts from bodhisattvas. A desperation perspired in the humid air. A force so strong that it had its own movement regardless of logic, time or space. A wind of self-preservation within one’s body. The People’s Army was arriving in Saigon.

Teresa Mei Chuc, author of three collections of poetry, Red Thread (Fithian Press, 2012), Keeper of the Winds (FootHills Publishing, 2014) and Invisible Light (Many Voices Press, 2018), was born in Saigon, Vietnam and immigrated to the U.S. under political asylum with her mother and brother shortly after the Vietnam War while her father remained in a Vietcong “reeducation” prison camp for nine years. Since the age of two, Teresa grew up in the Tongva village of Hahamongna (Pasadena, California) where she still lives and loves. Teresa is a graduate of the Masters in Fine Arts in Creative Writing program (Poetry) at Goddard College in Plainfield, Vermont and teaches literature and writing at a public high school in Los Angeles.