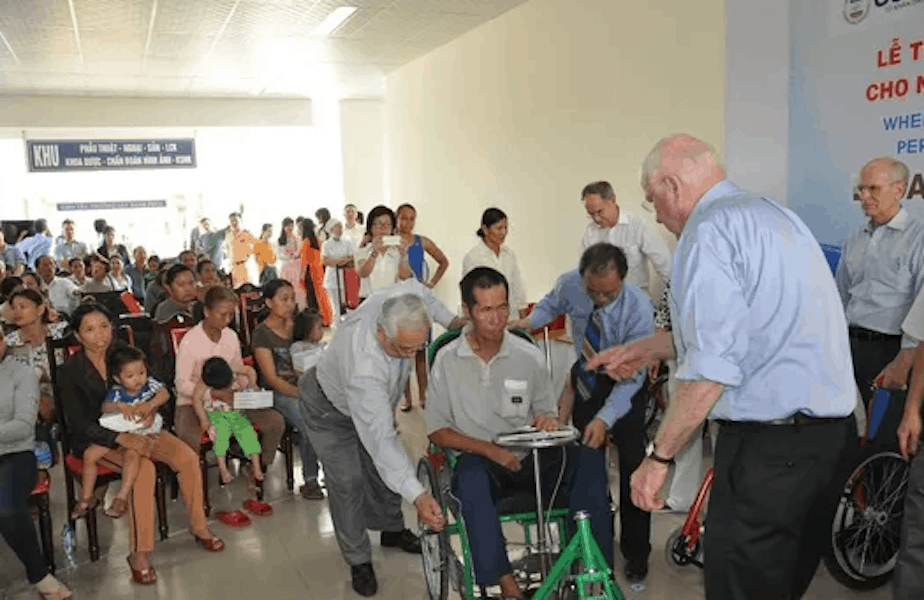 Photo credit: Sen. Patrick Leahy, D-Vt., right with back turned center, on a visit to the USAID-funded facility for Vietnamese citizens with disabilities, including illnesses caused by exposure to dioxin (Agent Orange). Rep. Peter Welch, D-Vt., can be seen on the far right. Leahy also is the leader in Congress on this project. (Photo: Courtesy of Sen. Leahy’s Office)

This article originally appeared at the BurlingtonFreePress.com. 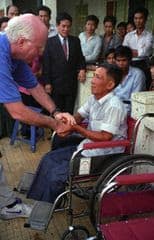 Sen. Patrick Leahy, D-Vt., in 1996, shakes hands with a Vietnamese man injured by a landmine gets who received his first wheelchair at a clinic in Vietnam funded through the Leahy War Victims Fund. (Photo: Courtesy of Sen. Leahy’s Office)

When I became a senator for Vermont in 1975, one of the first votes I cast was for a law to stop funding the war in Vietnam. That law passed by one vote.

Many of us know people who served in the war. Some lost their lives. Others were grievously wounded. Words cannot adequately describe the magnitude of the catastrophe of that war for the people of both countries. Forty-four years later, we still struggle in our country with the remnants of the divisions in our society caused by the war, as do the people of Vietnam.

My involvement with post-war Vietnam began in 1989, when former President George H. W. Bush and I talked about the need for reconciliation with Vietnam — something that many Americans, including veterans, were calling for.

President Bush agreed to use what was later named the Leahy War Victims Fund to provide prosthetics and wheelchairs to Vietnamese who were disabled from landmines and other unexploded bombs. That assistance, which continues today, has enabled thousands of Vietnamese to regain their mobility and their dignity.

Of course, others had been working on the MIA issue even earlier. That work helped bring closure to hundreds of American families. It was possible thanks to the help of the Government of Vietnam, at a time when Vietnam was struggling to recover from the war’s devastation.

For many years the United States has also helped locate and destroy the millions of landmines and other unexploded bombs that continue to maim and kill innocent Vietnamese. Fortunately, thanks to that effort, the number of casualties is far fewer today than it used to be. But more remains to be done.

Over the years I had many conversations with Vietnamese officials, before and after diplomatic relations were reestablished in 1995. No matter what the subject of those conversations was, the Vietnamese always brought up Agent Orange, and its effects on their people.

At the same time, American veterans who were exposed to Agent Orange and were suffering from cancers and other illnesses, were also seeking help from our government. In 1991 the Department of Veterans Affairs recognized those claims, but it wasn’t until another 15 years later that we began to address this issue in Vietnam.

We started at the Da Nang Airport, a former U.S. military base where Agent Orange, contaminated with dioxin, had been stockpiled. The U.S. Agency for International Development (USAID) deserves great credit for undertaking and completing such a complex, difficult, and ultimately successful project to decontaminate 100,000 cubic meters of soil and sediment.

The Vietnamese Ministry of Defense worked closely with USAID to overcome many obstacles to complete the project, and in doing so they helped advance relations between our two countries to a higher level. Like the MIA and UXO issues before it, Agent Orange evolved from a subject of anger and resentment, to one of cooperation and appreciation.

For four decades, the Da Nang Airport was a health hazard to thousands of people living nearby. A little over a year ago, the APEC Summit was held there. Soon after that, a U.S. aircraft carrier docked at Da Nang, and sailors visited an orphanage for children who may have inherited their disabilities from parents or grandparents who were exposed to Agent Orange. 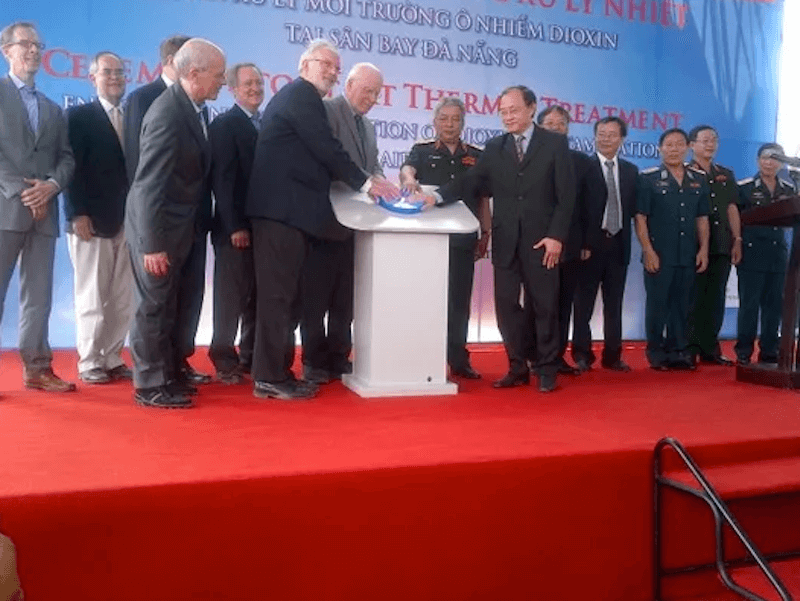 None of this would have happened were it not for the perseverance and cooperation of our two governments.

Throughout this period, USAID also expanded health and disability programs to seven Vietnamese provinces. They provide medical, rehabilitation, infrastructure, and social assistance to severely disabled Vietnamese in areas that were heavily sprayed with Agent Orange or contaminated with dioxin.

On April 17 I will arrive in Vietnam for the third time, accompanied by eight senators of both political parties. This time we will travel to the Bien Hoa Air Base near Ho Chi Minh City, which was the largest U.S. military base in Vietnam during the war.

At the same time, we will witness the signing of an agreement between the United States and Vietnam, spelling out a new 5-year commitment to support health and disabilities programs for persons with disabilities in provinces that were heavily sprayed with Agent Orange.

The benefits of this humanitarian cooperation have been far-reaching:

It has reunited the remains of U.S. soldiers with their loved ones;

It has enabled many people in Vietnam who lost their mobility to become mobile again;

It has helped Vietnamese families and communities to care for the disabled;

We are getting rid of the dioxin; and

We have begun to help Vietnam identify the remains of Vietnamese MIAs.

Just as important, this cooperation has been the foundation of a growing partnership. While our two governments have disagreements on important issues, we share many interests: from increasing student exchanges, to expanding trade relations, to combating climate change.

We cannot escape the fact that the war was a disaster for generations of Vietnamese and Americans.  Each of us who lived through that period has our own memories, our own emotions, our own opinions.

For me, there can be no excusing the folly of that war, nor diminishing of the immense destruction and suffering that it caused.

But we can all be proud of the way our two countries have worked to overcome that tragic legacy.  We have come a long way, and we have further to go.

Patrick Leahy is Vermont’s senior U.S. senator and is heading the official bipartisan delegation of nine senators that this week is visiting Vietnam and the DMZ in South Korea.