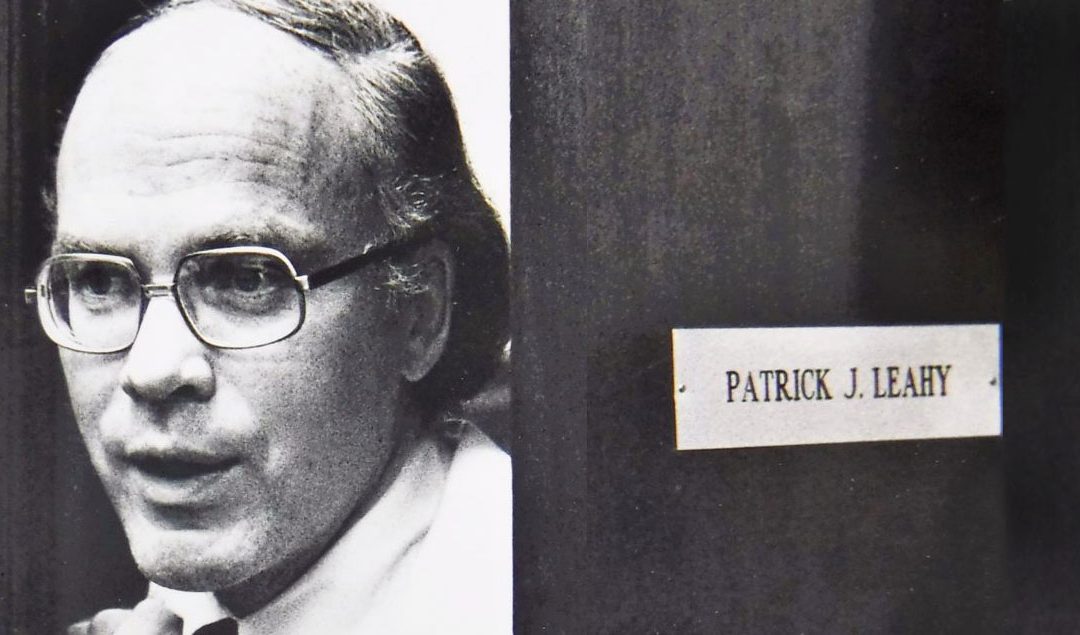 By Kevin O’Connor at VTDigger

On March 1, 1974, Patrick Leahy entered the Montpelier Statehouse as a 33-year-old insurgent with the seemingly impossible dream of becoming the first Vermont Democrat to win election to the U.S. Senate.

“It is time,” he said, “to bring a fresh new approach and leadership to government.”

Nearly a half-century later, a successful Leahy returned to the same place Monday to announce his imminent retirement as the 81-year-old dean of his congressional chamber.

Born legally blind in one eye — a fact that may surprise those who know him as an accomplished photographer — Leahy has experienced life with a singularly unique view, be it casting the deciding vote to reject U.S. reauthorization of the Vietnam War in 1975 or overseeing impeachment proceedings against former President Donald Trump this year.

Raised across the street from the Statehouse, Leahy discovered politics when he rode his tricycle through the Capitol corridors, sometimes detouring into the governor’s office for candy.

Leahy graduated from St. Michael’s College in 1961 and Georgetown University’s law school in 1964, then married Marcelle Pomerleau in 1962 before serving as Chittenden County state’s attorney from 1966 to 1974.

After U.S. Sen. George Aiken announced his retirement in 1974, Leahy succeeded him by beating then-Republican U.S. Rep. Richard Mallary and Bernie Sanders, who ran as a Liberty Union Party candidate before scoring his first congressional victory as an independent in 1991.

“After what many described as an improbable win, I began my time in the U.S. Senate in the aftermath of a constitutional crisis,” Leahy recalled Monday. “We faced a nation broken by the Watergate scandal, the resignation of President Nixon and an endless war in Vietnam.”

Philip Baruth, a Chittenden County state senator and English professor at the University of Vermont, can elaborate as author of the 2017 biography “Senator Leahy: A Life in Scenes.”

“Leahy was the first Democrat ever elected to the U.S. Senate from Vermont,” Baruth wrote in his book, “not solely because he was a skilled professional with a very strong track record in criminal justice, but also because he was more than willing to be actively constructed as a hero — to be the top cop not merely in the street-level reality of Chittenden County, but also in the greater evolving imaginary of post-Watergate Vermont.”

Leahy has chaired the Senate committees on appropriations (where he has worked on the past 12 annual federal budgets), judiciary (where he participated in the confirmation hearings of every current Supreme Court justice) and agriculture, nutrition and forestry (where he’s called the “father” of the national organic standards and labeling program).

Leahy wrote the first ban by any world government on the export of land mines as well as the Leahy War Victims Fund to help civilians maimed by weapons and the Leahy Law that bars U.S. foreign aid to militaries that violate human rights.

Leahy will leave with a few sensational memories. He received anthrax, for example, after the Sept. 11, 2001, terrorist attacks, retreated from the U.S. Capitol during this year’s Jan. 6 deadly riot and now serves as Senate president pro tempore and third in line to step in for President Joe Biden after Vice President Kamala Harris and U.S. House Speaker Nancy Pelosi.

Baruth’s book works up to a different climax on page 225, when Leahy is flying a decade ago from Washington, D.C., to a closed-door location unknown to anyone else.

“Leahy was all but beside himself with excitement,” Baruth wrote, and “had come an extremely long way from a gangly kid with one good eye, soaking up 1940s Flash Gordon and Batman serials in a tiny theater in Montpelier.”

Landing, Leahy stepped into perhaps his most cherished spotlight: the one illuminating his surprise cameo role opposite Oscar-winning actor Heath Ledger in “The Dark Knight” movie trilogy.

“We’re not intimidated by thugs,” Leahy, clad in his best suit, said as the character of the Joker threatened him with a prop knife.

“It was a truly amazing moment,” Baruth wrote, “when set against the long arc of Leahy’s political career: the very same Top Cop image that Leahy had developed as a young Chittenden County state’s attorney … now being explicitly deployed by a major Hollywood director to a worldwide audience.”

That said, Leahy’s tenure also has featured some low points, including his introduction of such unsuccessful bills as the Combating Online Infringement and Counterfeits Act (seen by many internet users as an attempt to help the entertainment industry legislate censorship) and his 1987 resignation from the Senate Intelligence Committee after he leaked a confidential report to NBC.

Leahy faced close electoral contests against Republicans Stewart Ledbetter in 1980 and James Douglas in 1992, supported EB-5 immigrant-investor development before several Northeast Kingdom projects were found to be part of a “Ponzi-like” scheme, and championed F-35 military jets that many complain are too noisy around the Vermont Air National Guard base in South Burlington.

Leahy is set to tell his own story in the memoir “The Road Taken,” set for release by publishing powerhouse Simon & Schuster in August 2022.

If Leahy had run again and won re-election, he could have passed the late 51-year U.S. Sen. Robert Byrd, D-West Virginia, as the longest-ever-serving member of his chamber. Instead, the Vermonter announced his retirement just like his predecessor Aiken, who was the same age and in the same honorary position when he surprised everyone with his plans on Valentine’s Day 1974.

“I gave out the only news that had come out of Washington for a long time without being leaked,” Aiken went on to write in his diary. “The media were a little short of material that day, so my announcement came in handy.”

On Monday, Leahy could pen the same thing, too.