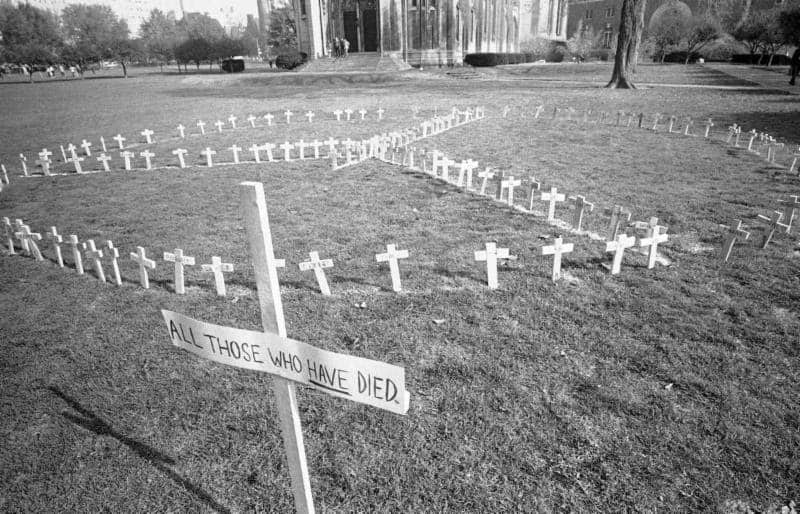 Kent State University has a year long program of events culminating with the fiftieth commemoration on Monday, May 4, 2020 at 12:00 noon. They will present a variety of nationally-known speakers, musicians and poets. Their plan is to look back at 50 years of commemorations and honor the four students who were killed and those wounded in 1970. They will also seek to look forward to inspire future generations to carry on the legacy of May 4, 1970. We understand the public will be welcome but details have not been announced. History.com recounts the terrible events here.
May 4 Visitors Center museum at Kent State University An old friend writes, “The only museum with permanent exhibits and archives devoted to the Vietnam era peace movement. Their archives for research amounts to 300 cubic feet of materials. The center is staffed, open for regular hours and supported by the university. Its permanent exhibits are well done, don’t avoid controversy, and are appealing to the general public.” Information here
At Jackson State University two students were killed by police on May 15th. NPR reported on the 40th anniversary that “all Jackson State students learn about the shooting in a mandatory orientation class, and professors evoke the event as a teaching tool.” CNN posted a good report linking together the shootings of students at Kent State, Jackson State, and the earlier much lesser know South Carolina State, site of the Orangeburg Massacre on February 8, 1968 where three students died. So far we are not aware of plans for a commemoration at Jackson State.
The National Student Strike began after the US invaded Cambodia on April 30, 1970. After the Kent State shootings, it exploded. According to Wikipedia, “More than 450 university, college and high school campuses across the country were shut down by student strikes and both violent and non-violent protests that involved more than 4 million students…Nationwide, students turned their anger on what was often the nearest military facility—college and university Reserve Officers’ Training Corps (ROTC) offices. All told, 30 ROTC buildings went up in flames or were bombed. There were violent clashes between students and police at 26 schools and National Guard units were mobilized on 21 campuses in 16 states. Walkouts and protests were reported by the National Strike Information Center at over 700 campuses across the country”. Large demonstrations were quickly organized in San Francisco (150,000) and Washington (175,000) — including occupation of Peace Corps headquarters by the Committee of Returned Volunteers.
A personal reflection. The diversity of protests in May of 1970 were not limited to students and were largely peaceful–but angry that the war had expanded and been brought home. Their nationwide size, scope and power, twice the Moratorium, has been largely forgotten. Does May’s 50th anniversary offer a new and different kind of opportunity for engaging with your community’s memory of peace movement history?
Local history is a well established profession. By making inquiry at nearby universities and state and county historical societies, you could find allies with professional skills and resources. They may be affiliated with the American Association for State & Local History that collaborates with H-Net to run the H-Local list serve, or with the National Council on Public History. If you would like more information about how to develop a local history project, check the box in the Spring 2020 question of the response form .
When I attended Elizabeth Warren’s speech at Washington Square Park on September 16th I was moved by her connection of the tragically unnecessary Triangle Shirtwaist Factory Fire that took place a few blocks away in 1911 to the role of Frances Perkins as a progressive reformer inside the system. Warren also embraced work outside the system, citing the impact of social movements in recent US history including suffrage, civil rights, the environment and LGBTQ. Oddly she did not mention the peace movement then or in an interview with Rachel Maddow the next evening. Was she not personally affected by it? Surely it has as much historical resonance for many of her supporters. Is the history of anti-war activity somehow more controversial as she seeks to expand her base?
It is literally up to us to reinsert the struggle for peace in Vietnam into the national discourse of progressive change. If not us, who?