Project RENEW joins with Quang Tri Province authorities and other mine action organizations in meeting with U.S. Senators on explosive remnants of war 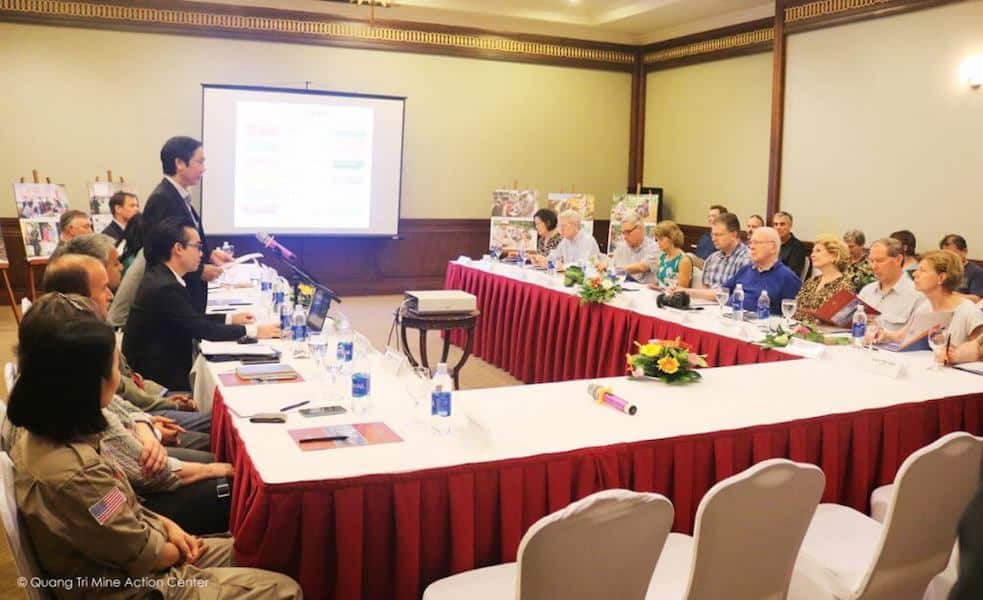 From 16 to 21 April 2019, U.S. Senator Patrick Leahy, the most senior member of the U.S. Congress, led an official bipartisan US Senate delegation of nine Senators to visit Vietnam during the Senate’s April recess.

As part of the Vietnam visit, on 19 April 2019, the delegation had a one-hour working meeting with the government of Quang Tri Province leadership and representatives of mine action organizations currently operating in Vietnam, including Norwegian People’s Aid (NPA), Project RENEW, Mines Advisory Group (MAG), Golden West Humanitarian, PeaceTrees Vietnam, and Catholic Relief Service. 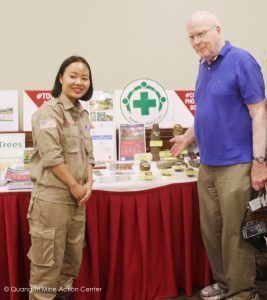 Held in the Imperial City of Hue, Thua Thien-Hue Province, this roundtable was an opportunity for the US Senators to hear directly from Quang Tri Province authority and international NGOs about the mine action work in Quang Tri and Vietnam as well as the need for U.S. continued support to bring closure to the Explosive Remnants of War (ERW) legacy that still affects the lives of Vietnamese.

Deputy Governor Hoang Nam opened the meeting with a presentation describing joint efforts between the local government and the international community to address the ERW problem.

Nam also expressed appreciation for the support the U.S. Government has provided to Quang Tri Province, much of which has been coordinated and managed by NPA as primary partner of Project RENEW.

He asked the Senators present to continue to support the work in Quang Tri Province, to complete the strategy of making Quang Tri the first province in Vietnam to be declared “impact-free” by 2025.

Each NGO representative introduced themselves and spoke briefly about the involvement of their organization in mine action in Vietnam and Quang Tri Province.

In response to a question from Senator Tammy Baldwin of Wisconsin, I was pleased to emphasize the role of women in all aspects of mine action activities, including management, support functions, and field work.  I pointed out that almost 30 percent of our Project RENEW-NPA staff are women. We have female managers, female Team Leaders, and female searchers. Any work that men can do, women can do also.

I concluded by telling Senator Baldwin, “It’s not about men or women; it’s not about the Government, different donors, or NGOs. It’s about working together on the same goal of making Quang Tri and Vietnam safe.”

I pointed out that even with the good will we all share, without the continued support from donors; we cannot get the job done.

Senator Leahy and the other members of the delegation were very happy to hear that the support from the U.S. is making a huge contribution to the effort to clean up unexploded ordnance and reduce the number of injuries and deaths.

Several of them, as they left the room after the meeting, said to us, “We really understand.  You can count on us for continued support” – indicating that when they returned to Washington, DC they would continue backing the work of Project RENEW and NPA and other colleagues of ours in Viet Nam.

Project RENEW was established in 2001 as a joint effort between the government of Quang Tri Province and interested INGOs to “restore the environment and neutralize the effects of the war” – with the main focus on unexploded ordnance.

Norwegian People’s Aid (NPA) is one of the leading organizations worldwide in humanitarian disarmament. NPA has worked in Vietnam since 2008 following the signing of an MOU with the government of Quang Tri People’s Committee to support the development of Project RENEW’s Explosive Ordnance Disposal (EOD) capacity. NPA’s operational footprint now covers all of Quang Tri and Thua Thien Hue Provinces, with an increase of assets to four Battle Area Clearance teams, one Non-Technical Survey team, four EOD teams, and 25 Technical Survey teams.