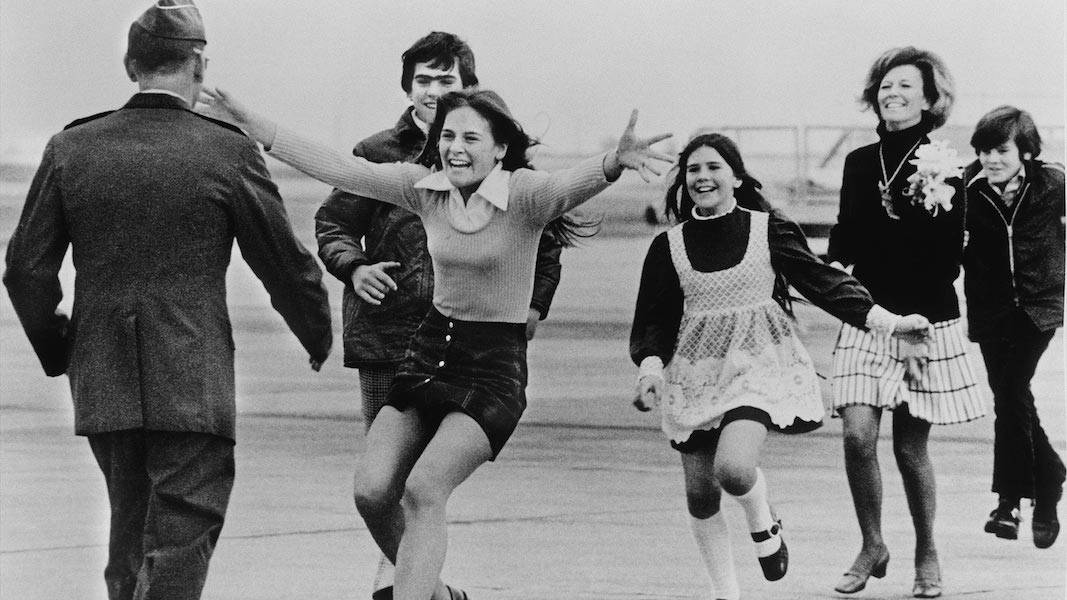 In the opening scene, marine Marlantes resurrects the theme of antiwar protestors attacking returning soldiers, claiming that his car was rocked.  The accompanying footage doesn’t back that up (in fact the signs say Active duty GIs against the war) and organizers, including veterans, who were at the Travis base airport claim the demos, were peaceful.  It is impossible to prove that something didn’t happen; the question is whether attacks on returning soldiers were typical.

Construction worker demo: these construction workers are constructed to represent the working class even though they are disproportionately white (through a history of racially exclusionary apprenticeship and hiring) and male.  Polls consistently showed greater opposition to the war than among the middle class:

Twice as high a proportion of college-educated adults, 40 percent, were hawks, compared to only 20 percent of adults with grade school educations. And this poll [1971 Gallup Poll] was no isolated phenomenon. Similar results were registered again and again, in surveys by Harris, NORC, and others. Way back in 1965, when only 24 percent of the national agreed that the United States “made a mistake” in sending troops of Vietnam, 28 percent of the grade school-educated thought so. Later, when less than half the college-educated adults favored pullout, among the grade school-educated 61 percent did. (Loewen quoted in “Historical Revisionism and Vietnam War Public Opinion”; Author: Mark D. Harmon, in Peace Studies Journal, Vol. 3, Issue 2, August, 2010)

And construction workers sent 70 protestors to the hospital.  Why is there a different standard for prowar violence than antiwar violence?  The violence is justified by the presence of NLF flags at the demo.  In episode 10, there will be further discussion of the question of solidarity with the NLF, for now it seems to B/N as well as the construction worker who says that the violence was provoked, that solidarity with the NLF constitutes treasonous acts that have crossed the line.  If one thinks the US war constitutes suppression of a legitimate nationalist movement, isn’t it logical to have solidarity with the resistance?  What does it mean to say that the war was wrong?

It’s hard not to think of our current President as Nixon proclaims the success of Vietnamization and the invasion of Laos.  Never apologize; always tout victories and achievements.  Yes they both learned Roy Cohn’s lessons well.

Eve Jefferson represents a moderate, but determined, wing of the antiwar movement who is eager to explain the depth of student alienation even as she doesn’t endorse some of the more militant tactics. She accurately calls out Agnew’s strategy of fear mongering and dividing parents from children.

The depiction of the VVAW’s Dewey Canyon III is quite powerful focusing on the powerful symbolism of veterans throwing away their medals and John Kerry’s eloquent testimony in front of the Senate Foreign Relations Committee.  But again B/N show themselves unwilling to face up to the depth of American war crimes in Vietnam, having GI Gioia immediately demurs from Kerry’s litany of war crimes followed up by how Kushner’s refusal to countenance his words as the North Vietnamese show the POWs clips of Kerry’s testimony.

B/N seem to endorse Pat Buchanan’s view that the crazies were coming to town after Dewey Canyon III to disrupt business as usual in Washington DC.  Again no participant in the demo is allowed to comment, but Bill Zimmerman is there to pontificate on how misguided May Day actions were—an unprecedented mass disobedience.  Many of the vets participated in the May Day action, and absent are condemnations of the actions by any of the VVAW members.  B/N are more negative about May Day’s civil disobedience tactics than the construction workers violent attack on antiwar protestors.  And they show a construction worker justifying the attack.

Again to not interview Ellsberg about the Pentagon Papers is inexcusable.  B/N do make interesting points about Nixon’s fear that his 1968 scuttling of the Paris Peace Negotiations might become public.  I, for one, was unaware of the failed attempt to burglarize the Brookings Institute.  B/N also expose the connection between the creation of Nixon’s ‘plumbers’ and the release of the Pentagon Papers; too often Watergate is silo-ed off from the war and treated as simply an illegal burglary to undermine McGovern (who of course was an antiwar candidate).  How do the Pentagon Papers–which trace the history of American involvement since Truman–square with the notion that the war “was begun in good faith, by decent people”?  How important are whistle blowers to maintaining democratic oversight?

While the US consistently failed to create a ‘third force’ as alternative to Saigon and the NLF, we witness the creation of a Third Force (certainly with some NLF membership) from the bottom up in opposition to the Thieu government.

Thieu justifiably fears that Nixon is seeking a new Chinese ‘mistress’ and abandoning South Vietnam.  It is also hard to imagine Thieu agreeing to any possible proposal, and he emerges as the main obstacle to the Kissinger/Le Duct ho negotiations.  Nixon’s dallying with the Soviets and the Chinese does expose the lack of genuine interest in Vietnam on the part of US policy makers.

Nixon’s mining of Haiphong harbor, which is mainly portrayed as risking détente with the Soviets and Chinese is arguably a war crime.

The napalming of Kim Phuc is still hard to watch.

I still remember that the media was more upset by the disorder (to their TV scheduling) of the McGovern convention than they were by the war.

Jane Fonda is fully demonized; conspicuously left out is her FTA tour of army bases in the Pacific; as she and Donald Sutherland, among others, toured outside military bases from Guam to the Philippines, over 60,000 soldiers cheered and joined the show’s call to end the war.  And Musgrave’s hyperventilating that his sexual fantasy betrayed him is taken at face value.

While B/N note that in October Le Duc Tho made the key concession in the peace negotiations in October 1972, they assert authoritatively that the DRV was selling out the NLF; without denying tensions between them, the B/N assertion is not generally agreed upon.  It is agreed that China and the USSR were pressuring the DRV to settle.

Members of VVAW were in the DRV along with Jon Baez during the Christmas bombing.  B/N neglect to mention the destruction of Bach Mai Hospital, considered to be a war crime around the world.

Are B/N unaware of Ambassador John Negroponte’s reputation as a “hardliner” in negotiations to end the war in Vietnam, once breaking with his boss Henry Kissinger for making too many concessions to North Vietnam?  Why is Kissinger rightly condemned while Negroponte is left off the hook?  And why is he the main spokesperson about the peace efforts?

What does “peace with honor” mean; is it merely a purely emotional platitude?  What kind of honor did Nixon achieve for the US?  What reparations does the US owe Vietnam?  How could Nixon have been held accountable for breaking his promise to Pham Van Dong to provide reparations?

And finally Why isn’t one of the three unanswered questions posed by B/N—1. How long will South Vietnam survive: 2. What would be the value of American promises to support Saigon; 3.  How long would it take the wounds of war to heal (they seem to be referring to the US): How long would it take and what would be required for the Vietnamese people to recover from this terrible war?  They seem to have completely lost track of the central problem with the American war.