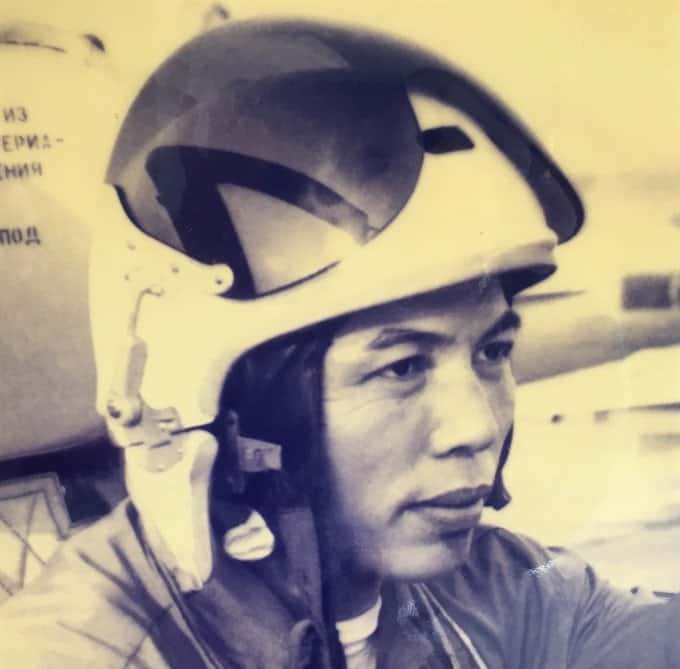 This reflection first appeared at Viet Nam News on June 16, 2018.

At about 4pm local time on Sunday, the sixteenth day of June 1968, air force Captain Đinh Tôn and his wingman, Captain Nguyễn Tiến Sâm, taxied their MiG-21single seat fighter jets to the northwest end of Thọ Xuân airbase and lined up to take off. Completing final checks and accelerating to a normal launch transition, they climbed to about 300 metres altitude, banking to the right and heading south at a speed of 800 kilometers per hour.

Pilots Tôn and Sâm were assigned to the 921st Fighter Regiment flying from Thọ Xuân. Today was Sâm’s first combat flight, and his job was to protect flight leader Tôn. For Tôn, every combat flight was important, as expectations for him were high.

Đinh Tôn had returned to Việt Nam only four months earlier from three years of advanced fighter training in the Soviet Union. He was older and more experienced than some of his classmates.

Born in 1936, Tôn misrepresented his age to join the army in 1951 to fight the French. After the defeat of the French at Dien Bien Phu, he began air force training in 1955, eventually flying the Il-2 cargo plane.

In 1962, Tôn got a taste for air combat maneuvering. While returning on a supply delivery flight he encountered a US jet fighter. Tôn increased power and pulled his unarmed cargo plane into a climbing turn, coming back in behind the US plane.  If his Il-2 were armed, Tôn was in perfect position to score a victory.

Tôn was selected for training on the MiG-21 in 1965. At age 29, he was one of the oldest pilots in his class, and a top student. When he returned on 20 February 1968, expectations were high.

Tôn was ready. He had early successes in 1968: three aircraft shot down in April, May and June. But today, on 16 June 1968, Tôn was intently focused on the present mission.

As Tôn and Sâm continued their flight southward passing over Nghĩa Đàn at 1500 metre altitude, ground control radar operators observed US Navy fighter jets from the sea flying west across Nghệ An Province about 40 kilometres ahead of Tôn and Sâm. They alerted pilot Tôn, who would soon seize the opportunity. About 12km ahead, Tôn saw a fighter jet turning away to the south and then begin to turn east, back toward the sea. Tôn closed in from behind, and, at 1,500m, launched an air-to-air missile, disabling the American plane, which descended rapidly in flames. Only four months after returning from flight training in the Soviet Union, Capt Đinh Tôn had downed his fourth US aircraft on 16 June 1968.

Fifty years have passed. My connection to this event is this: my father, Gene Wilber, was the pilot of the plane that Capt Tôn shot down that day. A few minutes later Gene Wilber would be captured on the ground in Nghệ An and travel to Hà Nội to prison. During his detention he would make statements against the American war, later returning to his home and family after the Paris Peace Accords were signed in 1973. Finally, after a long family life including 20 grandchildren and 10 great grandchildren, he would die of cancer at his home in July 2015.  In 2014 before he became ill, I began taking trips to Việt Nam to learn more.

Some things I have learned from the people of Việt Nam

In the process of my several trips, I met retired Viet Nam People’s Air Force Colonel Nguyễn Văn Sửu. I had hoped to find Tôn, but  Sửu, who had served in the same squadron with Sr Col Tôn in 1980, told me that Tôn had developed cancer and died at an early age.

Col Sửu continued to help me. In March 2016 he made arrangements with retired Lt Gen Phạm Phú Thái, a younger classmate of Tôn in flight training, to brief me on the air combat records from 16 June 1968. I was honored that he invited Trần Thị Diên Hồng, the widow of Sr Col Tôn, to share in the meeting at the VPAF Museum conference room in Hà Nội. 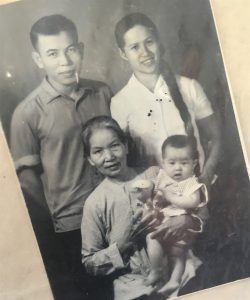 The personal story that Hồng shared captivated me. She told about aspects of their life that I would not have considered.

Hồng and Tôn grew up in the same village. When he returned on military leave visiting his home village, he asked young Hồng to marry him. They became engaged, but were separated by their responsibilities, including his years of advanced MiG-21 training in the Soviet Union. She was a doctor for the war wounded, while he was a pilot.

In June 1968, issuing a lighthearted challenge, Tôn’s commanding officer told him that when he would shoot down another American plane, he could take leave and go to marry his fiance. A few days later Tôn downed my father’s plane. The next month, on 27 July, Tôn and Hồng were married.

Their life together during the American war years would not be easy.  They had endured separation during their long engagement. Finding time to be together after marriage was also difficult, as they both had significant wartime responsibilities. In 1969 they had their first child, a girl. She would die at the young age of four years.

They also had a son, and another daughter after the war.

With the help of grandparents, Hồng and Tôn maintained their young family during the war years. Hồng would ride a bicycle from Thanh Hóa, sometimes only for an overnight visit. Tôn would sometimes fly to Hà Nội to spend only 15 minutes with the children. They persevered, and for his remaining years they had a wonderful life together.

I learned many of these life details from my visit to Hồng’s home in Hồ Chí Minh City in August 2016. Hồng keeps these most important aspects alive in her memories. She demonstrates resilience, grace, kindness and a spirit of reconciliation. I will always appreciate that she shared her memories of her husband Tôn so that I may know these human perspectives in this 50-year-old story that connects us.

Tom Wilber researches documentation regarding US prisoners held in the Democratic Republic of Việt Nam from 1964 until 1973. He has made dozens of trips to Việt Nam locating sites and conducting interviews. Wilber was a visiting lecturer at Hà Nội University in the undergraduate course on American Foreign Policy in 2018. He assists Hoả Lò Prison Museum with exhibits, and has facilitated the return of memorabilia from former US prisoners to Hoả Lò’s permanent collection for use in future displays.