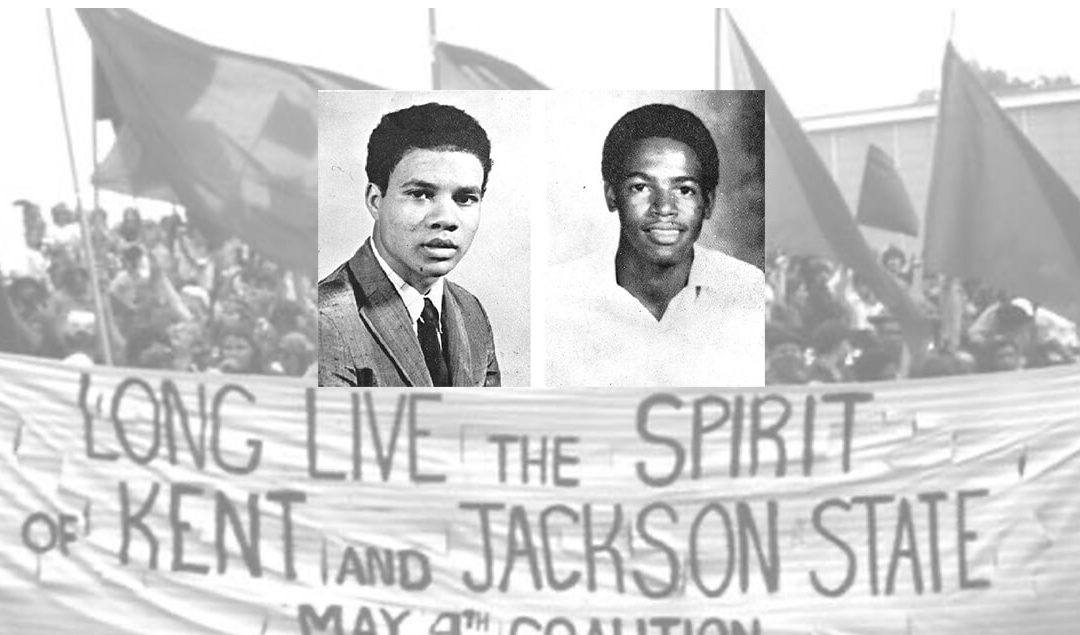 The violence wasn’t caused by anti-war student protest; it was another chapter in the long history of state violence against African Americans

By Nancy Bristow at the Nation

If the shootings at Kent State University have been misrepresented and misremembered, the targets of the deadly assault by law enforcement at Jackson State College have been twice victimized, their story erased from the nation’s public narrative, their trauma largely forgotten.

Shortly after midnight on May 15, 1970, officers from the all-white Mississippi Highway and Safety Patrol (MHSP) and the largely white Jackson police force opened fire on students in front of a women’s dormitory at Jackson State College, a historically black school located in the African American community west of downtown Jackson. Many commentators immediately saw in the violence parallels to the recent shootings at Kent State University. On May 18, 1970, an editorial in the Indiana Daily Student headlined the news about the shootings by crossing out the words “Kent State” and simply replacing them with “Jackson.” A week later, Time offered a similar view, referring to the violence at Jackson State as “Kent State II.” But what had happened at Jackson State was not another Kent State. The violence was not caused by student protest against the Vietnam War but was instead another chapter in the long history of state violence against African Americans, a story inseparable from the victims’ identities as young black people attending college in America’s most racially repressive state.

Many on the Jackson State campus believed it had been a planned assault, and it is not hard to imagine that the state troopers, well known for their bigotry and violent repression of African Americans, headed to the dorm with the intention of opening fire. But even if this was not the case, it changes the criminal behavior of law enforcement only by degree. Maj. Gen. Walter Johnson of the Mississippi National Guard, waiting on the edge of campus to relieve law enforcement, was stunned when the shooting broke out. “Oh my God,” he exclaimed as he looked toward Alexander Hall, “they’ve done it all wrong.” If the shootings were not planned, they were nevertheless a terrible atrocity, rooted in the racism of both the state troopers and the local police.

Law enforcement approached the African American students that night with assumptions about their inherent criminality, overreacting from the beginning to the disturbance on campus. Though someone had set a dump truck on fire in the street running through campus, in the context of May 1970, this hardly constituted what the police maintained was a “riot.” With an exaggerated sense of the danger the students posed, the officers armed themselves with weapons better suited to a military assault than crowd control. The highway patrolmen carried state-issued shotguns and double-aught buckshot, personal weapons, and even “two 9mm submachine guns.” The Jackson police brought the infamous Thompson Tank. Hurrying to campus in a panic, the two forces acted without adequate preparation or a clear understanding of their mission, demonstrating their disregard for the well-being of the students. After firefighters doused the dump truck, law enforcement did the inexplicable, turning not to leave the campus but to march provocatively to its center, halting in front of the Alexander Hall dormitory, where they turned to face students gathered outside the dorm’s west wing.

Students there were first confused—there had been no trouble at the dorm, where the students were “just chilling out”—and then angered. A few yelled at the officers. And then a bottle hit the pavement and the police opened fire. Twenty-eight seconds later, James Earl Green, a high school senior who lived nearby, and Phillip Gibbs, a junior at Jackson State College, lay dead, and 12 other young people bled from their wounds.

The racism of the officers numbed them to the horror they had unleashed. When the shooting finally stopped, students moved quickly to offer aid to the stricken. Neither Jackson policemen nor Mississippi highway patrolmen assisted them, instead turning to pick up their spent shells. Inspector Lloyd “Goon” Jones, onsite commander for the MHSP, ordered some of the young people, at gunpoint and using derogatory language, to check on those that appeared mortally wounded. Contacting headquarters he reported “several injured,” and when asked for details, noted simply, “They’re nigger students,” before turning to counting the number of “nigger gals” and “nigger males” who had been wounded. Dismissing the seriousness of what had happened, he explained further, “They ain’t hurt all that bad.” The conversation turned only briefly to the “two fatal” before moving on to a concocted story about a sniper and the need for coffee and cigarettes.

Read the full article at the Nation