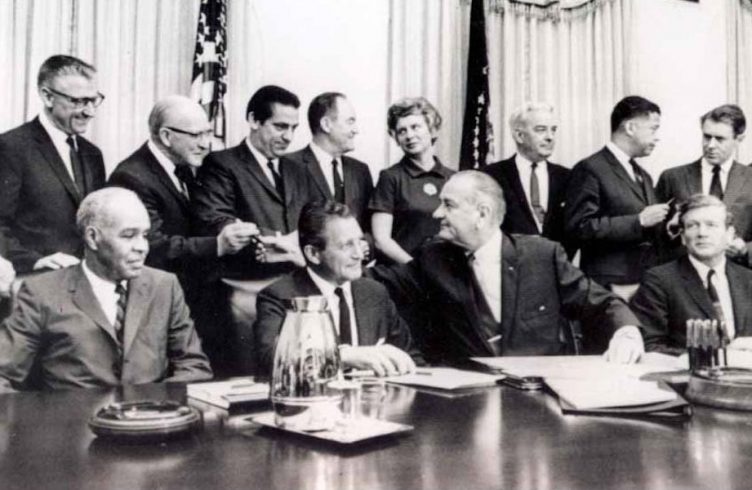 This article originally appeared at ronyoungviews.blogspot.com.

In March 1968, President Johnson, who had successfully launched important voting rights and anti-poverty initiatives, under pressure from the military, decided to send additional troops to join the more than half a million already in Vietnam to fight and eventually lose a war that cost the U.S. $100 billion. That same month, the bi-partisan Kerner Commission, appointed by Johnson in 1967 in response to riots in dozens of American cities, concluded that a massive national investment, estimated at $80 to $100 billion in employment, education, welfare and housing was essential to prevent our Nation from becoming “two societies, one black and one white – separate and unequal.” The Commission briefly considered recommending reducing and reallocating resources from the war in Vietnam but decided that would be too controversial.

Fearing the political costs of losing the war in Vietnam and facing deepening racial division and white backlash at home, Johnson ignored the Kerner Commission Report and, in a televised address to the nation on March 31, announced he would not seek a second term as President.  Five days later, on April 4, Martin Luther King, who praised the Kerner Report, was assassinated in Memphis where he had come to support the struggle of striking sanitation workers.

A year earlier, in his famous Riverside Church sermon, “A Time to Break Silence,” on April 4, 1967, King carefully, yet controversially, explained why he opposed the Vietnam War, including how the U.S. supported France keeping Vietnam as a colony. He spoke about the triple threats of racism, poverty and militarism. Reflecting his view that the war threatened Johnson’s Great Society initiatives, King declared, “There was hope for the poor – both black and white – through the poverty program, then came the build-up in Vietnam.”

Had he lived, there is little doubt that King would have opposed the U.S. wars in Afghanistan and Iraq, not only based on his principled commitment to nonviolence and against war, but because, like the Vietnam War, these wars robbed our nation of essential human and economic resources, estimated so far at more than $4 trillion – resources as desperately needed today as they were fifty years ago to address problems of poverty, racism, and growing inequality.

Fred Harris, sole surviving member of the Kerner Commission, and Alan Curtis, President and CEO of the Eisenhower Foundation, have edited a new book, Healing Our Divided Society, an updated review of the challenges our country faces and what can be done. The book includes two dozen articles by prominent economists, educators, journalists, sociologists and others, with recommendations for major national investments in economic development, employment, education, healthcare, housing and neighborhood investment. It also includes critical articles addressing crime prevention and criminal justice policy, and the need for effective messaging to engage the media, something the Kerner Commission failed to do fifty years ago. Clearly, given the current context, substantial investments are also needed to address the national opioid crisis and the challenge of global warming, and to rebuild the country’s infrastructure. This Eisenhower Foundation book is even more convincing and useful because it includes several evidence-based essays documenting what federal programs actually have worked, what ones haven’t, and why.

Where this book and most of the articles updating the Kerner Report fail is in not addressing our country’s exceptionally high level of military spending (roughly half of the Federal government’s discretionary spending) and factors in U.S. foreign policy that, since the end of World War II, have gotten our country into wars we later regret. Currently, U.S. military spending is higher than that of the next eight countries combined. Ironically, the Eisenhower Foundation book totally ignores President Eisenhower’s wise moral insight that,“Every gun that is made, every warship launched, every rocket fired signifies, in the final sense, a theft from those who hunger and are not fed, those who are cold and not clothed.” President Trump and his new National Security Advisor John Bolton, who seems eager to get us into more wars, want to increase military spending and decrease spending on social needs.

There is no use pretending: if we are serious about healing our divided society, as Martin Luther King prophetically declared, we need a revolution in our cultural values and a radical shift in our national priorities, away from violence and militarism to nonviolence and effective policies and programs to meet people’s real needs for living wage employment, housing, healthcare, and education. Recent mass marches led by women and young people, combined with voter registration campaigns, offer hope that our country can make the right critical choices

Ron Young is an activist, author who blogs on contemporary national and international issues, drawing on 5 decades of experience working for peace and social justice. In the 1960s, he participated in the Civil Rights Movement, working with Rev. Jim Lawson in Memphis and briefly with Dr. King in Selma. During the Vietnam War, Ron resisted the draft, visited Saigon and Hanoi, and coordinated national peace marches in Washington, DC. Since serving as Middle East Representative for the Quakers in the 1980’s, he’s led a dozen interfaith trips to the Middle East and serves as Consultant to thirty Jewish, Christian and Muslim national religious leaders working together for peace. Ron is a popular and inspiring speaker in colleges, high schools, congregations and community forums.