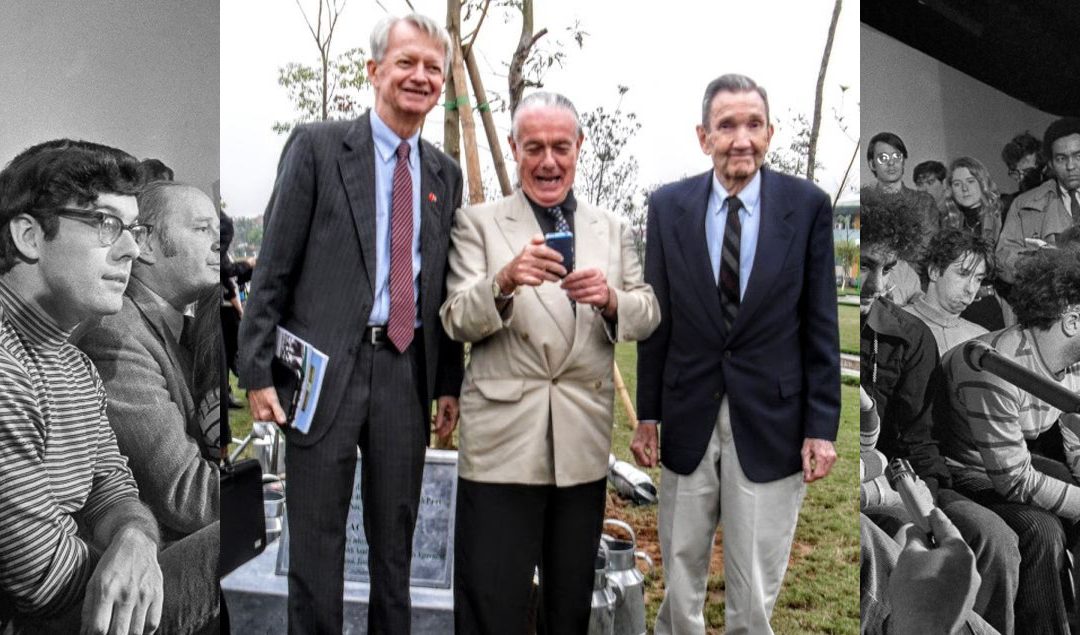 Rennie Davis, one of the last living ‘Chicago 7′ activists, dies at age 80

Photo: Rennie Davis (center) admiring his selfie taken with Chuck Searcy and former U.S. Attorney General Ramsey Clark, who served during the Kennedy and Johnson administrations.  Photo was taken in Ha Noi during the 2013 commemoration of the signing of the Paris Peace Accords in 1973 – intended to end the war in Viet Nam.  Rennie all pictured far left (b/w) durign the Chicago 7 trial.

Rennie Davis, one of the “Chicago 7” activists who was tried for organizing the anti-Vietnam War protests outside the 1968 Democratic National Convention in Chicago, has died at his home in Colorado. He was 80.  A longtime peace activist, Davis was national director of the community organizing program for the anti-war Students for a Democratic Society, was a protest coordinator for the Chicago convention, and he helped organize the largest civil disobedience arrest in American history. During the American war in Viet Nam, Davis traveled to North Vietnam at the invitation of the North Vietnamese government, and brought American POWs back to the United States.  He made numerous visits to Paris during the Paris Peace Talks and became very close friends with Mme. Nguyen Thi Binh, at that time head of the Provisional Revolutionary Government’s delegation, and later Vice President of the reunified nation of Viet Nam, the Socialist Republic of Viet Nam.  Davis returned to Viet Nam in 2013 as part of a delegation to commemorate the 40th anniversary of the signing of the Paris Peace agreements.  I got to know Rennie and his wife, Kirsten Liegmann, during that trip.

They were invited to a private dinner with Vice President Binh which they said was a high point of their visit.  Rennie and Kirsten also had a number of engaging meetings with young Vietnamese during that trip, in which they promoted Rennie’s ideas of new technologies for energy and environmental protection, and a broader vision for a new humanity.  He was a lecturer on meditation and self-awareness.  Kirsten said Davis is known as the ’60s activist, “and really what he would want to be remembered for is his vision for a new humanity — the magnificence of who we are,” she said.

February 8 In Operation Lam Son 719, three South Vietnamese divisions drive into Laos to attack two major enemy bases. Unknowingly, they are walking into a North Vietnamese trap. Over the next month, more than 9,000 South Vietnamese troops are killed or wounded. More than two thirds of the South Vietnamese Army’s armored vehicles are destroyed, along with hundreds of U.S. helicopters and planes. (See entry for Jan30-April 6)

February 23 Senate Democrats voted (38-13) to adopt a “resolution of purpose” for the 92nd Congress to end US involvement in Indochina and “bring about the withdrawal of all US forces and the release of prisoners in a time certain.”