Review: Mark Satin’s Manual for Draft-Age Immigrants to Canada is just as timely as ever 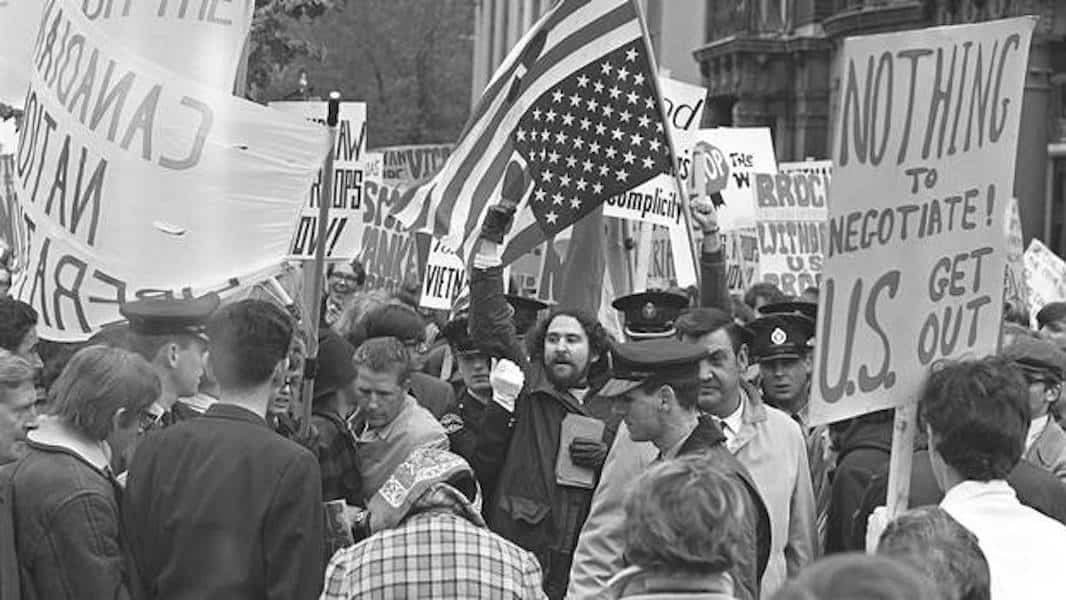 This article originally appeared at TheGlobeandMail.com.

In 1971, when I was a partner in New Press, a Toronto publishing house in a ramshackle Victorian in the Annex, I noticed a succession of long-haired, dishevelled young men walk in and mount the stairs to our bathroom. In the free-spirited ethos of those days, our front door was always open. I asked who the guys were and a colleague said they were American draft dodgers squatting in a garage across the street. They’d asked permission first, she assured me.

Just another day during the Vietnam War.

By then, more than 30,000 dodgers and deserters had taken refuge in Canada, thousands of them in Toronto. They’d begun arriving in 1965 and many were already settling into peaceful and productive lives across the country. We whose government had kept us out of the deadly debacle in Vietnam sympathized with the U.S. refugees. It took a desperate courage to cut oneself off from family, friends and homeland, immigrating to a country that looked deceptively familiar yet was strangely different. They couldn’t go home again without being jailed or forced to take part in a war they didn’t believe in.

Many of the exiles – over a third by one scholar’s estimate – made their life-altering decision after reading an innocent-looking paperback from another small Toronto press, the House of Anansi. Its drab cover adorned only by a red maple leaf, the Manual for Draft-Age Immigrants to Canada delivered detailed advice about becoming a Canadian and knowledgeable guidance about the country and its opportunities. The little brown book not only strengthened the anti-war movement, it became a publishing phenomenon.

Released in January, 1968, the Manual was updated through six different editions. By war’s end it had sold, to the astonishment of its publishers, some 65,000 copies on both sides of the border. Another 30,000 or parts thereof were copied in bootleg editions by American anti-war groups. On some campuses the Manual had to go underground; U.S. Customs often confiscated shipments destined for college bookstores. At the FBI’s instigation, the RCMP looked into Anansi, but found nothing illegal, just as it was perfectly legal for Canada to allow draft evaders to immigrate.

Today, Anansi is no longer a small press. Having attained the ripe old age of 50, something of a triumph in Canadian publishing, it’s reissuing the Manual among its “A List” of classic titles marking the anniversary. The new cover design is more elegant – a peace dove taking flight with that red maple leaf clutched in its beak. An introduction by James Laxer focuses on the Manual’s relevance in the Trump era, which is driving new waves of refugees across our border, mainly from third countries, as we’ve witnessed in recent weeks.

But it’s in the new afterword by Mark Satin, the Manual’s creator, where we can taste the grit, guts and adrenalin fuelling the sixties anti-war movement. Satin arrived in Toronto in 1967 as, in his own words, “a small, woefully undereducated Amerikan [sic] kid with unkempt hair and torn clothes.” At 20, he was already an activist with credentials as a civil-rights volunteer in Mississippi. Intent on helping his fellow Americans escape to Canada, he co-founded the Toronto Anti-Draft Program (TADP) and became its first director.

Ambitious and media-savvy, Satin was a self-described “natural-born American social entrepreneur” impatient to do more than counsel draft evaders, essential as that task was. At TADP board meetings he “vociferously argued that a mass movement of young Americans to Canada would help end the war” and that a practical handbook, widely publicized and distributed, would draw them here. Satin’s brash conviction alienated some of his Canadian board members, older veterans of the peace movement who mistrusted “rabble-rousing” and publicity. They feared the Manual would only upset the Americans, who would close the border.

Satin pushed ahead regardless, writing parts of the Manual himself, soliciting encouraging articles from sympathetic Canadians such as historians J.M.S. Careless, Kenneth McNaught and a young Jim Laxer. But Satin needed something more to realize his dream – a publisher. He turned to a friendly frequent visitor to his office, the writer and Canadian nationalist Dave Godfrey, who had recently co-founded Anansi with poet Dennis Lee.

“One September night,” Satin has written on the Anansi blog, “I walked Dave out of the office and up Spadina [Avenue] toward his place, plucked up my courage and asked if he’d like to publish the book.” Satin outlined his scheme: a 5,000-copy first printing and an ultimate goal of selling 50,000, “because we needed to make Canadian immigration a viable option for all young Americans.” At first, Godfrey stared at him as if he were mad. But, given to bold schemes himself, Godfrey also recognized a kindred spirit. If TADP paid for the printing, Anansi would promote and distribute the Manual, splitting the profits 50-50.

Little realizing that Godfrey was a publishing neophyte with only four titles in print, two of them his and Dennis Lee’s, Satin was overjoyed. And in the end, he was proved right – even though he was long gone from the TADP by then, and Godfrey was gone from Anansi, having left to co-found New Press with Jim Bacque and me.

So why read the Manual today? Simply put, for its compelling documentary value as an artifact of a dangerous time, a time when, as one contributor put it, Canadian identity was “up for grabs.” How we responded to America’s war in Vietnam and to its victims, gave flesh and bone to that identity. The country made itself a welcoming place for American refugees during the war and Vietnamese refugees afterward, of whom an even greater number settled among us.

At the same time, Canadian corporations profited from selling war materials to the American military and Canadian appointees to the United Nations commission on Vietnam frequently served U.S. interests. But in Canadian public opinion, a line had been drawn between unjustified and justified wars, preparing the ground for the Chrétien government’s refusal to join President George W. Bush’s invasion of Iraq, while agreeing to contribute to the UN-authorized campaign in Afghanistan.

Our current government, with its open-handed policy toward Syrian refugees in stark contrast to Trump-style fear and loathing of the Other, has revived the tradition of welcoming war victims. That tradition will be severely tested as migrants fleeing the United States continue to pour over the border, circumventing the immigration process – something most Vietnam war resisters did not do. Meanwhile the Manual reminds us what we stand for at our best.

Postscript: After President Jimmy Carter pardoned draft exiles in 1977, Mark Satin returned to his homeland. Now 70 and living in California, he is the author of New Age Politics: Healing Self and Society and other books.

Roy MacSkimming’s books include The Perilous Trade: Publishing Canada’s Writers and the historical novels Macdonald and Laurier in Love.