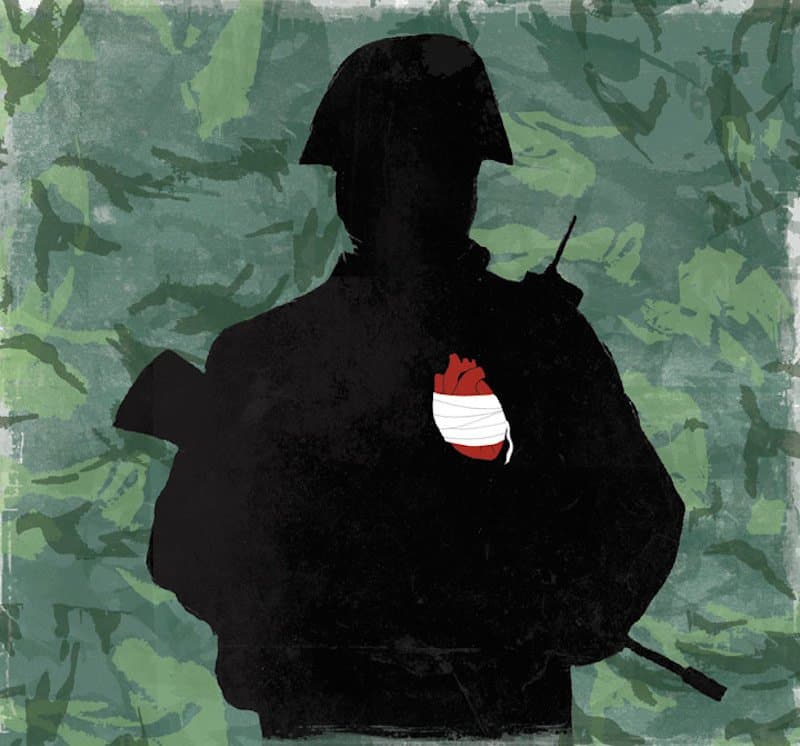 Alice Lynd’s timely monograph MORAL INJURY AND CONSCIENTIOUS OBJECTION: SAYING NO TO MILITARY SERVICE ( Summer 2015, Quaker House Publications) is exactly what we in Veterans For Peace need as we go about our work in our local communities. Alice has put together a sort of hands-on “manual” that combines compassionate narrative with all the references and back-up information an activist could ever need as she or he attempts to weave the concept of “moral injury” into dialogues with veterans, with active-duty military men and women and their families, and with young people considering military service. I use the word “manual” with hesitation because this little gem is not only factual, but it’s a darn good read. She masterfully gives us a personal, close-up look at the courage it takes to really follow one’s conscience in the face of entrenched bureaucratic and cultural resistance. And then she directs us toward references that can actually help us guide our communities into action. If you’re heading into a school or staffing a table at a peace fair or holding a party at your house, you would be well served to have copies of MORAL INJURY at hand.

Even before the reader gets into the heart of her case for bringing our moral compasses pointing to true north, she gives us a working definition of “moral injury”:
“When men and women in the military believe they did or saw something that betrays their deeply held sense of right and wrong, it can create inner conflict and self-blame, and shake up their moral foundation. They may feel what they did or saw is unforgivable. They experience ‘moral injury.'”

And now the narratives begin as we hear from such VFP luminaries as Brian Willson, Camilo Mejia, the late Jacob George, Brock McIntosh, Vince Emanuele, and Geoffrey Millard. Each veteran lets the reader into his moment of deepest anguish, into a moral epiphany. Imagine a high school senior contemplating the Marines reading this from Brian: ” My first thought was that I was witnessing an egregious, horrendous mistake…. I didn’t see one person standing. Most were ripped apart from bomb shrapnel and machine gun wounds, many blackened by napalm beyond recognition; the majority were children…. From that moment on, nothing would ever be the same for me.” Or Camilo: “When I opened fire that day, I violated that law[of morality] and desecrated the most sacred sanctuary of my being. As I observed that young man through the sight of my rifle, I was staring at a point of no return….My moral injury is the pain I inflicted upon the very core of my being when I took something I could never give back.”

Those of us who knew and remember Jacob George, a veteran of three tours in Afghanistan who succumbed to his moral injury by taking his own life last year, can sense his anguish as he recounts carrying “… two bags of body parts out of the building to figure out who it was. We had no idea if they were civilians or insurgents…. We had no idea who was in there, more than likely women and children.” And Vince Emanuele, a Marine in the Iraq War, tells it like it is as a veteran trying to cope with life after war: “Each day is a struggle. The more I try and put the war behind me, the more the dog of war bites at my heels as I run away from the grief.”

And did I mention what a wonderful resource this little pamphlet is? Each page is loaded with footnotes to guide the reader into deeper and richer contexts. Alice even leads us directly to assistance on her last page, listing telephone and e-mail contact information for the G.I. Rights Hotline, the Quaker House, the Center on Conscience & War, and the Brite Divinity School, Soul Repair Center. Yeah, you heard me right — “soul repair” — such an exquisite concept, which reminds me of Jacob’s lament about the V. A. He shares with us an encounter with a therapist there who tells him that after Jacob felt a much needed sense of relief from having thrown his medals away at a demonstration, the V.A. can’t encourage him to do that. Jacob’s reply:
“You’re telling me that you can’t offer me the actual healing rituals and ceremonies that I need, that an entire generation of people needs in order to heal their souls?”

Please put this booklet into the hands of as many people as you can. And here’s the best news — Alice is offering multiple copies of MORAL INJURY AND CONSCIENTIOUS OBJECTION: SAYING NO TO MILITARY SERVICE free of charge. Copies of the pamphlet may be obtained at no charge except for shipping from Quaker House in Fayetteville, N.C., qpr@quakerhouse.org or 910-323-3912. And, by the way, the Quaker House also offers educational presentations on moral injury for no charge other than transportation costs. Let’s take them up on their generous offer.