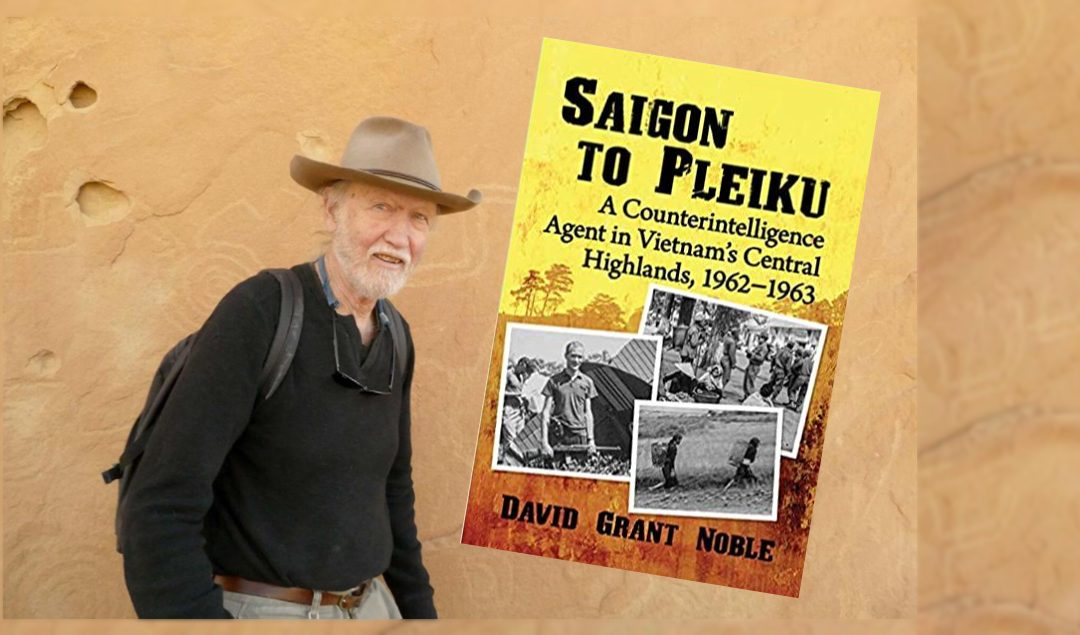 Before Americans knew anything about Vietnam: ‘Saigon to Pleiku: A Counterintelligence Agent in Vietnam’s Central Highlands, 1962-1963’ by David Grant Noble

by Robin Martin at Pasatiempo

America’s involvement in Vietnam’s civil war in 1962 and 1963 is not as well-known as later battles. The Tet Offensive, Battle of Khe Sanh, and Saigon’s fall are often remembered, but the days before our military presence in Vietnam exploded are seldom written about.

Santa Fean David Grant Noble went to Vietnam in 1962 as a 22-year-old private in the U.S. Army. The 60 letters and postcards he wrote to his family back home are the basis of his newest book, Saigon to Pleiku: A Counterintelligence Agent in Vietnam’s Central Highlands, 1962-1963. They are recollections of a time when few Americans had thought about Southeast Asia.

The book chronicles his tour as an enthusiastic but unprepared counterintelligence agent who learned a lot about the U.S. Army, something of the South Vietnamese government, and a bit about the hill tribes where he was stationed in Pleiku. Over time, he became less and less convinced that the Americans could build up a struggling democracy that would keep the Communists at bay in Asia. After leaving the Army in 1964, he became an anti-war protester.

When Noble graduated from Yale University, many classmates joined the Peace Corps or enrolled in military officer training. Noble was drafted. He went to basic training at Fort Dix in New Jersey and was later accepted into the intelligence school at Fort Holabird in Maryland. Because he was fluent in French, he put France as his first choice on his assignment preference form, then Belgium, and then “any other French-speaking country.”

The sergeant announcing duty stations told Noble that he would be sent to Saigon.

“Noticing the blank look on my face, he added, ‘Vietnam.’ Vietnam I knew of but had trouble placing it,” he writes. “That evening, I went to Fort Holabird’s library where, in its sole world atlas, I could find no ‘Vietnam’ in the index. The librarian suggested I try ‘Indochina’ and there it was, along with Tonkin, Annam and Cochinchina. To find out that the army intelligence center’s atlas was so far out of date was my first hint of things to come.”

That short and humorous paragraph explains a lot about America’s failure in Vietnam — as well in Iraq and Afghanistan.

The intelligence training center’s library had only two items about Vietnam: a slim volume of love poetry and an old pamphlet with tips on how naval officers assigned to the Saigon embassy should dress and how they could gain membership in an elite French colonial club.

Once in Vietnam, the junior intelligence agent’s opinion about our military’s understanding of the country didn’t improve. There was a cultural divide and a language barrier. Noble’s recounting of his experiences in Saigon would be funny, if they didn’t underline America’s ineptitude abroad.

He told his commanding officer in Saigon that he wasn’t clear who the Viet Cong were. The officer replied, “The Viet Cong is the bad guy — you’ll know him because he looks just like a Vietnamese.”

Many of Noble’s assignments in Saigon seemed inane to him, but perhaps he was being evaluated for a post in Vietnam’s uplands at Pleiku. He and his team bugged the hotel room of suspected homosexuals. Over six feet and blond, Noble was sent to tail a suspect through city streets, followed by a mob of curious children. “It would be an understatement to say I stood out,” Noble writes.

Once in Pleiku, his assignment was to learn about and report to headquarters on the local tribes. These Montagnards (French for hill people) belonged to many different tribes, spoke different languages, and followed age-old customs. The men hunted and fought with spears; they wore loincloths. They lived in grass and cane buildings. Few spoke Vietnamese or French. Their allegiance to the South Vietnamese army, and to the Americans, was tenuous.

He began his tour feeling superior to the tribesmen, but his attitude changed. The dedication to the book reads, “The Jarai and Bahnar people of Vietnam’s Central Highlands taught me, by their very presence, about the dignity of all human beings, whatever their social and cultural background or level of economic development.”

Noble met with Vietnamese military personnel, some of whom he admired as dedicated and honest officers. Most Americans did not respect the South Vietnamese army. He visited American religious missions and French plantations. His reports to Saigon headquarters must have been excellent because the young man became a respected agent.

Because the Montagnards controlled more than half of the country, the Americans tried to convince them to fight on their side against the Viet Cong. This was hopeless, as the U.S. military and the tribesmen did not understand each other — linguistically, culturally, or in any other way.

As an example, in January 1963, a joint American-Vietnamese military camp at Plei Mrong was attacked. The American and Vietnamese special forces rounded up Montagnards suspected of aiding the Viet Cong, and Noble was assigned to interrogate them with the help of electric shocks from a field telephone. His commander asked a question in English, which was translated into French, then into Vietnamese, then to the Jarai tribal language and back again. The answers seldom resembled the questions.

One prisoner was asked where a Viet Cong training camp was. He had been there and explained subtle landmarks along the path from his home. The Americans needed cardinal directions, distances in kilometers, and a point on a map, not a description of mountain trails. There were no words in the tribal languages for democracy or communism. The people had never heard of the leaders of North and South Vietnam, Ho Chi Minh, and Ngo Dinh Diem. Time, for them, was measured by how high the rice had grown.

“Soon,” Noble writes, “I found myself taking perverse satisfaction in the uselessness of what I wrote up. Words such as futility and absurdity entered my mind — about the interrogations and about everything else. The exercise I was engaged in had become a metaphor of something larger, but not yet clearly defined.”

The book is an essay about his changing opinions on the war. It is also a chronicle of his journey into adulthood. It is often uncomfortably honest. His letters home underline racial and social prejudices he was not yet aware of. Not included in the letters to his mother were a 20-something’s adventures in foreign cities. There were bars and women. He explored dangerous neighborhoods in Saigon. He bar-hopped in Hong Kong. He cheated a prostitute in Bangkok.

Noble left Vietnam in 1963, and the Army a year later. His disillusion with the war had become so profound that he joined protests in New York and Washington, marching with anti-war veterans who included World War II and Korean War soldiers and members of the Spanish Civil War’s Lincoln Brigade.

The book ends there, but Noble’s career of writing and photographing had just begun. He reported for a Manhattan neighborhood newspaper and taught French at an elite New York boys’ school. He lived with artist Ruth Meria, now his wife. He photographed Mohawk construction workers at New York building sites.

He developed an interest in the Southwest and became friends with Pueblo scholar Alfonso Ortiz when the anthropologist was a professor at Princeton University. In 1970, he and Meria began taking road trips to the West. When they finally arrived in Santa Fe, the couple pulled up at the Sherwood’s gas station near the Plaza and ran into Ortiz. “He took us under his wing,” Noble said, and showed him the Hopi villages and Canyon de Chelly.

The couple became friends with photographer Laura Gilpin. In 1972, she told Noble the School of American Research (now School for Advanced Research) was looking for a photographer. He went to work at SAR and an early assignment was photographing the archaeological excavations at Arroyo Hondo.