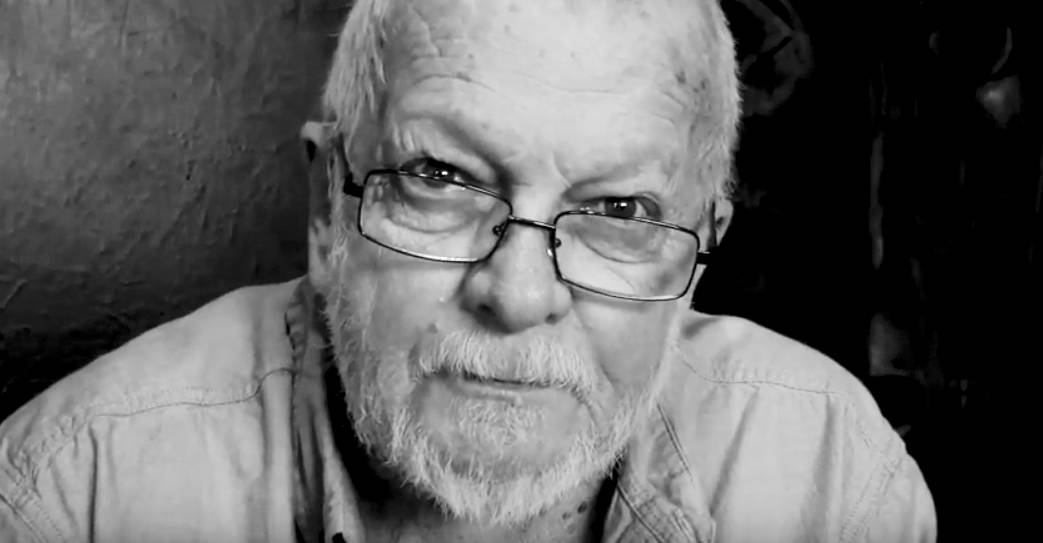 This obituary of Sam Hamill, “former Marine-turned-pacifist,” was published at nytimes.com on April 26, 2018. PHOTO: heraldnet.com

Sam Hamill, who gave up a wayward life to become an accomplished poet and founder of Copper Canyon Press, a leading nonprofit poetry publisher, and whose impromptu protest before the American invasion of Iraq in 2003 became a cri de coeur for artists nationwide, died on April 14 at his home in Anacortes, Wash. He was 74.

His daughter, Eron Hamill, said the cause was complications of chronic obstructive pulmonary disease

Mr. Hamill was a former Marine-turned-pacifist who beat a heroin habit before helping to found Copper Canyon Press in 1972 with a $500 prize he had won for editing the literary magazine Spectrum at the University of California, Santa Barbara. After buying a printing press, he and three partners — Tree Swenson, Jim Gautney and William O’Daly — set up shop in Denver.

The company released its first book: “Badlands,” a collection of verse by Gerald Costanzo, in 1973. The next year, Mr. Hamill and Ms. Swenson moved Copper Canyon to Port Townsend, Wash.

Mr. Hamill served as Copper Canyon’s editor for the next three decades, and his refined taste and painstaking translations of Asian poets like Du Fu, Wang Wei and Matsuo Basho helped ensure the company’s success.

Copper Canyon has since released hundreds of new books or fresh translations of work by, among others, the Nobel laureates Pablo Neruda, Rabindranath Tagore and Octavio Paz and the Pulitzer Prize winners Carolyn Kizer, Ted Kooser and W. S. Merwin.

Mr. Hamill was a prolific writer himself. He published several books of prose and 17 collections of lyric poetry. His work could be autobiographical and naturalistic, but he believed that verse should engage with the world.

He grappled with political and social issues in poems like “True Peace,” about the Vietnamese Buddhist monk Thich Quang Duc, who burned himself to death in 1963 in a busy Saigon intersection to protest the persecution of Buddhists by the South Vietnamese government. It reads, in part:

The master did not move, did not squirm,
he did not scream
in pain as his body was consumed.
Neither child nor yet a man,
I wondered to my Okinawan friend,
what can it possibly mean
to make such a sacrifice, to give one’s life
with such horror, but with dignity and conviction.
How can any man endure such pain
and never cry and never blink.
And my friend said simply, “Thich Quang Duc
had achieved true peace.”
And I knew that night true peace
for me would never come.
Not for me, Nirvana. This suffering world
is mine, mine to suffer in its grief.

Mr. Hamill felt obligated to take action when he received an invitation in January 2003 to a White House symposium to be held by the first lady, Laura Bush, on the work of Emily Dickinson, Langston Hughes and Walt Whitman. Outraged by the Bush administration’s proposed military campaign in Iraq, he sent an email to 50 friends and colleagues rejecting the invitation and asking them to submit protest poems to him.

“The only legitimate response to such a morally bankrupt and unconscionable idea is to reconstitute a Poets Against the War movement like the one organized to speak out against the war in Vietnam,” he wrote in the email.

Mr. Hamill’s correspondents shared his call to action, and within a few days he received more than 1,500 responses. He built a website to present the poems he received, and the White House eventually canceled the symposium.

More than 135 poetry readings and other protests were held around the country on Feb. 12, the day the symposium was supposed to begin. More than 13,000 poets submitted work to Mr. Hamill’s website, some of which, including poems by John Balaban, Ursula K. Le Guin and Adrienne Rich, were collected in an anthology, “Poets Against the War.”

“It was almost as if they were waiting breathlessly for someone to step forward and say, ‘Enough is enough,’ ” Mr. Hamill told The Progressive magazine in an interview that April. “We became a chorus.”

Mr. Hamill’s antiwar activity left him with less time for Copper Canyon, and he stepped down as editor at the start of 2005 over creative differences with the board. Later that year The American Poetry Review praised his “diligent and imaginative guidance,” which it said had helped make Copper Canyon “one of the most important publishers of contemporary American poetry.”

Sam Patrick Hamill was born, by his account, in Northern California to an illiterate carnival fry cook. His date of birth is listed in records as May 9, 1943, his daughter said.

As a toddler he was adopted by Samuel Hamill, a poultry farmer, and the former Freeda Empey, a schoolteacher; the couple lived in Holladay, Utah, just outside Salt Lake City.

Mr. Hamill said that his adoptive parents had been abusive and that as a teenager he ran away from home, making it to San Francisco, where he began using heroin.

He met the poet Kenneth Rexroth outside the City Lights bookstore there, and the two became friends. Mr. Rexroth fed Mr. Hamill, helped him give up drugs and taught him about poetry — kindnesses that Mr. Hamill said changed his life.

“Poetry gave me a reason for being,” he said. “And I’m not exaggerating when I say that. My ethics, my sense of morality, my work ethic, my sense of compassion for suffering humanity, all of that comes directly out of the practice of poetry.”

He joined the Marine Corps before he turned 20 and was stationed in Okinawa, Japan, where he began studying Zen Buddhism. He became a pacifist, which did not endear him to his commanding officers, and he was honorably discharged in 1965.

In the mid-1960s he married Nancy Harmon, and they moved to Marin County, Calif. They divorced in the late 1960s as Mr. Hamill began studying poetry at the University of California, Santa Barbara, where he became involved with the civil rights and antiwar movements.

Mr. Hamill married Ms. Swenson soon after they started Copper Canyon. Their marriage ended in divorce in the early 1990s, and a few years later he married Gray Foster, a painter. She died in 2011. His daughter is his only immediate survivor.

Mr. Hamill’s honors include fellowships from the National Endowment for the Arts and the Guggenheim Foundation. His last collection, “After Morning Rain,” is to be published this year by Tiger Bark Press.