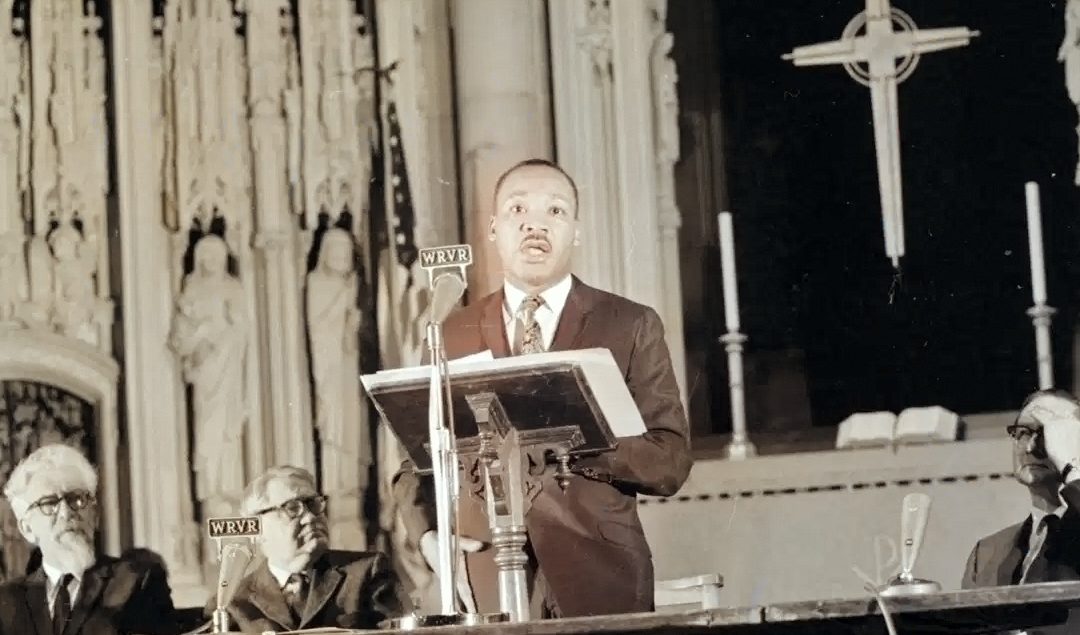 Ravi Cullop is a high school student in Portland, Oregon, who submitted this essay for his Political Economy class. Published with the permission of Ravi and his teacher, Hyung Nam.

I had never seen or heard this speech before, and even reading it without the audio, it was really thought provoking and engaging. MLK is usually remembered as a champion of civil rights for black people, and nothing more, so to see him address a deeper issue that connects to all aspects of American life was a new experience for me. In the first paragraph he proclaimed that those who question him straying from civil rights and talking about other things “have not really known [him], [his] commitment, or [his] calling.” Since he is remembered for civil rights and little else, I guess so. I see now that he was determined to advance human rights and equality for all people, and in a way that would bring about meaningful positive change in the U.S. and the whole world. This makes the fact that he was taken from us all the more saddening.

To understand why his message here was relevant in 1967, and continues to be relevant today, we must first analyze the speech a little bit. Martin Luther King Jr.’s “Beyond Vietnam” speech is in the context of the Vietnam War and Civil Rights Movement, and this alone makes it relevant today. We are also in a time when civil rights and equality are under the spotlight, and when our government’s continued focus on the military and war instead of on the people has been called into question. The central idea of this speech is how we need a “true revolution of values,” away from exploitation and violence and towards peace and equality. Our capitalist society, which favors profit over people, is the “deeper malady” which is responsible for many of our societal ills. For example, on page 2, he argues that we must “‘shift from a “thing-oriented” society to a “person-oriented” society.”’ He goes on to say that this would enable us to conquer “the giant triplets of racism, materialism, and militarism.” This means that we need to start caring more about people than profit. Earlier on that page, Dr. King also explains that we will be marching against many problems and injustices for years to come “unless there is a significant and profound change in American life and policy.” By mentioning life and policy together, Dr. King brings our political and economic systems into sharp focus, and gives us areas where our solutions must come from. There must be new legislation that protects and lifts up the poor, and stops the rich from exploiting people. Today we should extend this to the planet as well. Dr. King then highlights a specific moral shortcoming of our system when he says “…individual capitalists of the West investing huge sums of money in Asia, Africa, and South America, only to take the profits out with no concern for the social betterment of the countries…” This points the finger squarely at capitalism for so many injustices and inequalities. Just so you know, I am not trying to merely summarize Dr. King’s words, but I want to highlight the meaning of them and get the main message straight so we can apply it to our modern world.

Around the world today we see the rise of social democracies like Germany or Norway, which in many ways are the embodiment of Dr. King’s words. Here are well developed democracies that take care of their workers, rather than exploiting them. Here are countries that provide universal health care and free college education, all for the betterment of their people and society. Norway doesn’t have 2.2 million people in prison, and Halden Prison in Norway looks like a hotel, and they focus on rehabilitation and job training. If these are not people-oriented societies, I don’t know what is.

By contrast, the United States, which Dr. King believed “can well lead the way in this revolution of values,” has continued to fall behind in comparison to these other person-oriented countries, but all hope is not lost. I believe that we can still fulfill his vision of what America can be. In the U.S. today, we are slowly seeing the increasing popularity of politicians like Bernie Sanders and AOC, who would have been labeled as communist and politically shunned during the cold war or under McCarthyism. They bring change, and seek to emulate and improve upon the people-oriented policies that make those other countries great. As Dr. King says, we must overcome the “Western arrogance of feeling that [we have] everything to teach others and nothing to learn.” The time to learn is now. So how do we get to a person-oriented society?

Dr. King envisioned a “positive revolution of values” to defend us against communism. That is in the context of a war to stop communism from spreading to Vietnam. In today’s context, it means we should pour so much energy and money and votes into making our society a beacon of progress and equality and democracy, in order to secure our spot on the right side of the world revolution. The U.S. government’s current strategy for securing our place in the world is to have a strong, aggressive, and well funded military. What if we diverted the $705,400,000,000 — which is the DOD budget proposal for 2021, and also 10.6x higher than the proposed education budget — away from the ongoing 20 year war in Afghanistan and away from our bomb factories, and towards our own people. If we took that money, which is currently used to take life from people, and instead used it to improve the lives of all our citizens, the U.S. could once again be the envy of the world. If we took that money, and other money that is used to exploit workers and give tax breaks to the rich, and we used it to improve our schools, give free healthcare to all, free college education for all, ensure workers’ rights, and to make amends for centuries of injustices towards people of color, if we did all that we could at last be a person-oriented society.

If we initiated a positive movement to embrace our values and take care of our people, we would not need to go to war against other people for their values. That would be the “significant and profound change in American life and policy” that we need, and I hope to see it someday and be a part of it. So to wrap it up, yes. This speech and the message of Dr. King are very much relevant in 2021, because they offer insight as to how a revolution of values may save our society.