‘The Temperature in Saigon Is 105 and Rising’ 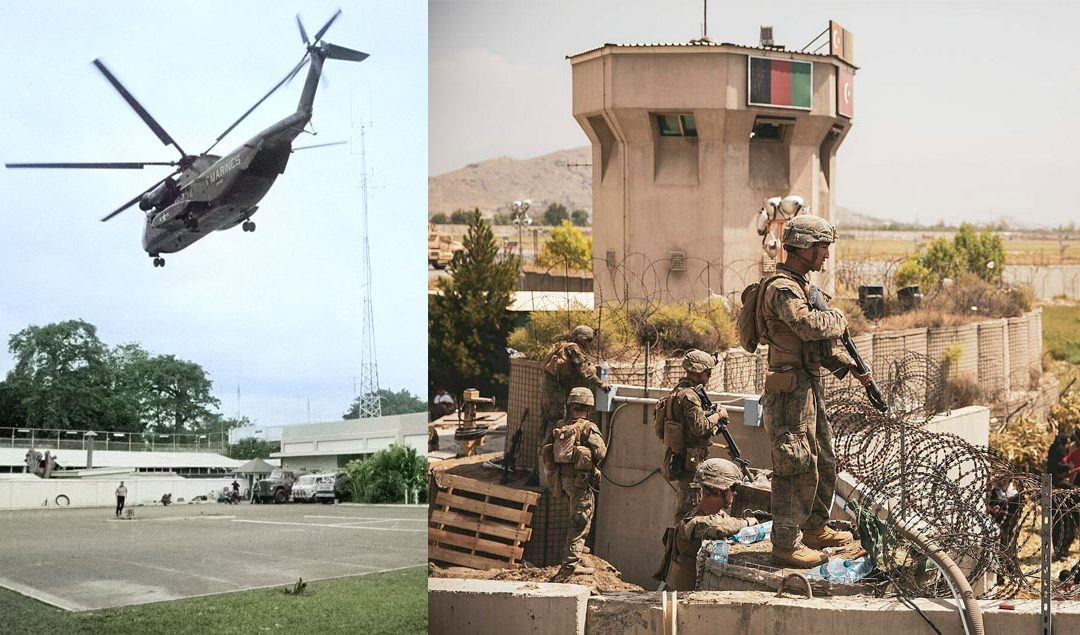 What I learned about American power watching the U.S. leave Vietnam — and then Afghanistan decades later.

by Philip Caputo at Politico

As a Marine Corps veteran of Vietnam (1965-1966), a reporter who was among the last to be evacuated from Saigon by helicopter (1975) and a correspondent who covered the Soviet invasion of Afghanistan from the Afghan side (1980), I can say with authority that I agree wholeheartedly with Secretary of State Antony Blinken’s statement, “This is not Saigon.”

Compared to what’s happening now in Kabul, the chaotic U.S. exodus from Saigon seems in retrospect to have been as orderly as the exit of an audience from an opera.

But there are similarities that can’t be ignored. The news and images from Kabul — the thud of helicopters, the roar of transport planes landing and taking off, along with footage of civilians mobbing the planes, desperate to get on — summon my memories of April 29, 1975, when, trapped in a city under siege, my colleague Ron Yates summed up the uniquely American feeling of empire at sundown.

“Know how I feel? The way you do at a football game when it’s the last two minutes of the fourth quarter and the score’s fifty-six to zip and your side’s the one with the zip,” said Yates, who was the Far East correspondent for the Chicago Tribune at the time.

Yates and I were huddled with around two dozen other foreigners, mostly war correspondents, in the first-floor corridor of the Continental Palace hotel in Saigon as the North Vietnamese Army rolled south. The building shimmied and shook as NVA artillery pummeled Saigon.

It was ten-thirty in the morning, and the shells had been falling for six hours. Enemy tanks had penetrated the city’s outer defenses. The day before, we had been given our instructions and assignments to evac teams, each of which was issued a Citizens Band radio to monitor coded traffic over the airwaves.

The code words we waited to hear were: “The temperature in Saigon is one hundred and five and rising,” which were to be followed by a few bars from Bing Crosby’s “White Christmas.”

The Parable of the Tamarind Tree

We did not hear it, only incomprehensible chatter on our team warden’s CB, and we wondered, “Is it still humming, is the Great American Delusion machine that for ten bloody years has predicted the shining of the light at the end of the tunnel, still churning out fantasies and slickly-packaged nonsense?” The most recent fairy tale was that South Vietnam was capable of standing on its own, capable of repelling the North’s onslaught, despite incontrovertible evidence that it was no such thing.

That collective delusion may sound familiar to veterans of the Afghan conflict.

Central to the fairy tale was the legend of the Tamarind tree, which rose in the courtyard of the U.S. Embassy in Saigon. For roughly the last month, embassy staffers had pleaded with Ambassador Graham Martin to cut down the Tamarind so helicopters could land there safely and evacuate U.S. officials and the Vietnamese who worked for them. Graham refused — felling the tree would send the wrong message to our allies, he claimed. Only twenty-four hours before, even as evacuation teams were being assigned, he had cabled Washington with good news: The situation was well in hand, cancel all evacuation plans, Saigon would not fall. Afterwards, a band of young embassy officials had bypassed Graham and given Washington the facts. The White House had cabled its reply in fifteen minutes — the evac was back on.

But huddled in our hotel within walking distance from the embassy, we were all asking ourselves, “Is it really? Does the Tamarind still stand?”

Then our warden yelled, “Choppers on the way!” and told everyone to keep quiet. He cranked the CB volume to max, and we heard:

“Diamond Control, this is Whiskey Six. Temperature in Saigon is one zero five degrees and rising. Over.”

The warden jumped to his feet, shouted: “That’s it! One hundred percent evacuation! We’re outta here!”

Our team was bused to the military side of Tan Son Nhut, Saigon’s airport. The bus passed the U.S. Embassy, a huge fortress surrounded by a 14-foot wall topped with razor wire. The scene there resembled a soccer riot: thousands of Vietnamese trampling each other, trying to smash through the iron gates or to scale the wall. Atop it, U.S. Marine guards smashed hands and heads with rifle butts — a picture that engraved itself on my mind, that filled me with bitterness and sorrow — American Marines clubbing the people they had been sent to save ten years ago.

And as we drove toward the airport, passing sullen, frightened Vietnamese soldiers, I also felt ashamed of myself and my country. I felt like a deserter.

With NVA one-thirties pounding the airstrip, we were herded into the Defense Attaché compound. There, a semblance of order, welcome after the mess of the past few hours, had been established. Hundreds of Vietnamese, mostly military officers and their families, were crammed in with us. Marines and embassy personnel divided us into helicopter teams, issued manifest cards, told us where to assemble. We moved toward the doors. A Marine swung them open and commanded, “Go!” I sprinted for a Chinook helicopter idling in the landing zone, a tennis court, of all things. Vietnamese sprinted with me, though some were hobbled by their suitcases, filled with gold bars.

So many men, women and children piled into the Chinook that it looked like a New York subway car at rush hour. I wondered if it could lift off. It did, soared over Saigon and rice paddies and villages, and crossed the coastline. I noted the time: 4:17 pm. All I could see below were the South China Sea and ships, the warships of the 7th Fleet, civilian ships pressed into military service. They were packed with refugees.

The Chinook touched down on a carrier’s flight deck. The hatch opened, Yates and I clambered out behind a woman leaning sideways from the weight of the smuggled gold in her flight bag. A sailor slapped me on the back and said, “Welcome to the USS Denver, welcome home, buddy.”

And that’s the way it was on the last full day of America’s first lost war.

Delusion From the Delta to the Kush

How have the last days of the country’s second lost war been worse?

Well, I’ll admit it’s my impression, from watching and reading the news, that they are.

Read the rest at Politico