The Terrible Violence of ‘Pacification’ 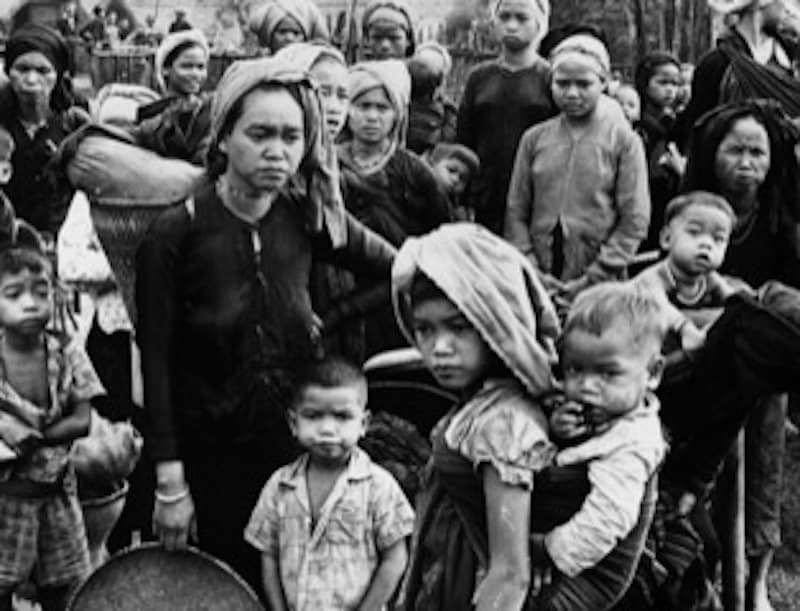 This article originally appeared at thenewyorktimes.com.

South Vietnamese displaced by the war, circa 1970. Three Lions/Getty Images

By the time of the cease-fire in Vietnam in 1973, more than 10 million South Vietnamese, mostly from rural areas — well over half of the estimated total population of 17 million — had been driven from their homes by the war. The United States Senate subcommittee on refugees estimated that by 1974, over 1.4 million civilians had been killed and wounded, and attributed over 50 percent of these casualties to the firepower of American and South Vietnamese forces. These displacements and casualties were not just the byproduct of warfare but also a result of deliberate policies by the United States and South Vietnamese governments.

In Vietnam, the United States fought two wars: a conventional war in remote areas against the North Vietnamese Army units that had infiltrated into the South and a struggle among the rural people to win their “hearts and minds.” It was in this fight for influence and control against the insurgents (or Viet Cong) in the rural areas, where 80 percent of the people lived, that the American and South Vietnamese governments wreaked the most havoc on the population.

For the Viet Cong (who preferred to refer to themselves as liberators: the National Front for the Liberation of South Vietnam), the rural population was vital to their survival and hope for victory. The insurgents lived among them and depended on them for intelligence, protection, recruits and resources. As Mao Zedong famously put it, the guerrillas are the fish; the people are the water. To expand their zone, the Viet Cong would infiltrate villages under government control to proselytize and recruit.

To clear the Viet Cong from the areas they controlled and from contested villages, the United States relied on the strategy of pacification. “Pacification” derives from a Latin word that means to make peace, but the act of pacification is violent. It started with an assault on hamlets and villages, with bombing, shelling and mortar barrages to prepare the way for ground attacks. Once a hamlet or village was taken over, South Vietnamese government officials moved in to solidify control. Militia and self-defense forces were set up to provide security. Then the government would try to win hearts and minds by building schools and clinics, and begin a process of economic development leading to modernization.

In December 1965, the insurgents were reported to control 56.4 percent of the land area of South Vietnam, or 37,400 square miles of a total territory of 66,200 square miles. Most of the land they controlled was in remote regions such as the Central Highlands, the Plain of Reeds and other sparsely populated areas like those near the border with Cambodia and Laos. So although they held over half of the land area, they controlled only about 24.5 percent of the population, about 3.7 million people. Another 13,000 square miles were considered contested areas.

Those figures suggested to American planners that pacification could target more than a quarter of the population and over half of the country’s land area. Pacification on such a scale, however, was infeasible for the Saigon government to undertake, so only so-called priority villages — those near military bases, air fields, transportation arteries, and towns and cities — were subjected to pacification. Those under the control of Viet Cong were designated as “free fire zones” and bombed and shelled, under the assumption that anyone who lived there was Viet Cong by definition.

The bombing and shelling drove people to flee into areas under government control in greater numbers. Statistics published in January 1975 by the Subcommittee to Investigate Problems Connected With Refugees and Escapees, part of the Senate Committee on the Judiciary, indicated that the number of refugees registered by the government in 1965 was 772,000. This number grew to 906,000 in 1966. By 1967, the government had registered 2.1 million refugees. In addition to those the government registered — those placed in squalid camps of dilapidated huts — there were an estimated two million who were not registered, including about one million in Saigon.

In mid-1967, Samuel Huntington of Harvard, working as a consultant to the State Department, visited Vietnam. On his return, he wrote an article in Foreign Affairs, “The Bases of Accommodation<https://www.foreignaffairs.com/articles/vietnam/1968-07-01/bases-accommodation>,” in which he stated that “the most dramatic and far-reaching impact of the war in South Vietnam has been the tremendous shift in population from the countryside to the cities.”

He went on to say, “In an absent-minded way the United States in Vietnam may well have stumbled upon the answer” to the insurgency. The answer lies in “forced-draft urbanization and modernization,” which would drive the rural population from the villages into urban areas and deprive the insurgency the support it needed “to generate enough strength to come to power.”

Although Professor Huntington wrote that “the social costs of this change have been dramatic and often heart-rending,” he ultimately believed that the forced movement of peasants was a positive outcome. The article shocked many people and turned Mr. Huntington into a controversial figure among those opposed to the war. Nevertheless, his piece significantly influenced the latter phases of pacification.

At first, pacification was left in the hands of the South Vietnamese armed forces. The policy changed in 1966 when the slow progress of pacification prompted an effort to speed it up, and the American Ninth Division was dispatched to Dinh Tuong, a province in the upper Mekong.

The division’s mission was to act like a bulldozer, clearing the path for South Vietnamese officials and troops to move in and establish a government presence, and to keep the enemy’s main force units from disrupting that effort. The ferocious operations by the Ninth Division and its enormous firepower inflicted heavy civilian casualties, culminating in operation Speedy Express in 1969, during which American forces counted 10,000 “Viet Cong” killed but captured only 900 weapons.

In 1968, the insurgents carried the war to the towns and cities up and down the length and breadth of the country in the Tet offensive. American and South Vietnamese armed forces launched a furious counteroffensive, which inflicted additional destruction and casualties. Another million people were estimated to be displaced during the Tet offensive and another offensive in May 1968. The losses incurred by the Viet Cong during those counterattacks opened the way for the American and South Vietnamese governments to push an accelerated pacification program. The few restraints that had been in place to prevent indiscriminate killing of civilians were lifted, and the extensive use of firepower in populated areas was applied with deadly results to “drain the pond to catch the fish.”

Over the next year, large areas of the countryside became depopulated. Besides registered and unregistered refugees who fled from their villages, the displaced included peasants who simply moved to another hamlet or area in a hamlet, or who moved to an open field, away from the clumps of trees and vegetation targeted by bombing and shelling. As an added precaution, they began to wear white clothing instead of the usual peasant “black pajamas” that Americans had come to associate with the Viet Cong, to avoid getting killed. In addition, there were also temporary refugees who moved in or out of a village for a few weeks at a time, or who would come back to their land occasionally to salvage what they could from their orchards.

As part of accelerated pacification, the C.I.A. created the Phoenix Program to root out the Viet Cong infrastructure. Critics of Phoenix have called it an assassination program, aimed at Viet Cong cadres as well as innocent civilians. Besides killing guilty and innocent alike, Phoenix also provided local officials and policemen a sanctioned program to abuse power with false arrests, settling of scores and extortion. Phoenix did seriously damage the Viet Cong infrastructure, but the cost was high for the government as well, since the program sowed fear, resentment and distrust among the population.

Pacification worked, in a narrow sense: By 1970, the Saigon government had control over a larger area of the country than it did five years before. However, the South Vietnamese Army, reluctant to take on Viet Cong and North Vietnamese forces, relied even more on bombing and shelling to retain and enlarge the gains made during the high tide of American military intervention. It also resorted to forced relocation of peasants remaining in the heavily contested and Viet Cong areas, destroying or burning the houses of those who refused to move closer to the military posts that had been erected so that they could be kept under close surveillance.

In the Central Highlands, Gen. Ngo Dzu, the regional commander, began an extensive program of forced relocation of the Montagnard ethnic minorities; given a few days’ notice, thousands of villagers had to abandon their homes and belongings and move to dismal resettlement centers, where they lacked housing, water and health care. Hundreds died after being forced to relocate.

The cease-fire of 1973 did not bring peace to the battered rural area and its people. Before and after it went into effect, the government and the Communists each engaged in land-grabbing. The January 1975 report by the Senate subcommittee on refugees, issued a few months before the Communists defeated the South Vietnamese government and won the war, estimated that the total number of refugees had grown to 11.6 million.

When the war ended, South Vietnam and its rural population had been profoundly transformed. Before fighting escalated, 80 percent of the people lived in the rural areas. By 1975, South Vietnam had gone through a “forced-draft urbanization.” The influx of refugees from the countryside into the urban areas had swelled their population, so that 65 percent of South Vietnamese were now living in towns and cities.

The war had taken from the peasants who had been driven into urban areas to find safety what they cherished most: the land that their forebears had walked and tilled, and the homes that had sheltered them for generations. It had also shattered the families that had sustained them from birth. These were the things that had made their life whole before they became victims of the Americans’ “forced-draft urbanization” of their society, accomplished with bombing and shelling rather than with the industrialization that had “urbanized and modernized” the United States and other Western countries.