The art thriving in the most heavily bombed country in history 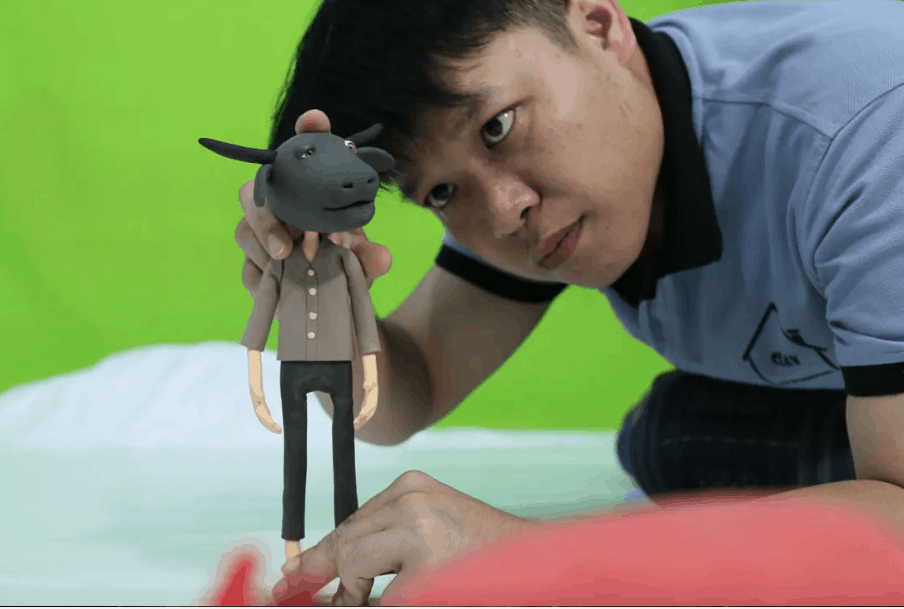 Photo: Souliya Phoumivong, with one of the clay buffalo he uses for his stop-gap animation film Flow

This article originally appeared at thegau

As Laos opens up after decades of war and isolation, a new generation of artists are telling stories of resilience, strength and beauty

When he was a child, Bounpaul Phothyzan saw his neighbour get his hand blown off by a buried live bomb.

It was a “terrifying” image of carnage that would stay with him as an adult and artist. In 2012 he started taking photographs, interviewing people and researching the damage done by the unexploded ordnances that have killed or maimed more than 20,000 people since the “secret war” in Laos ended 40 years ago. Between 1964–1973, the small south-east Asian country became the most heavily bombed country in history per capita, with more than 2m tons of bombs dropped in a CIA-led mission that was aimed at blocking Vietnamese supply lines. It is estimated there are still 80m unexploded bombs in the ground, with farmers risking their lives every day to work in mine-laden fields to feed their families – and with children being the worst affected.

Responding as an artist, Phothyzan says he became “very upset [at] how people could destroy each other. How innocent lives were lost, and how people in the countryside who lived their lives without hurting anyone could have this happen to them.”

Lie of the Land, Phothyzan’s two pieces at the Asia Pacific Triennial (APT9), are deceptively peaceful until you get up close and realise that he has planted a garden inside clearly marked US bombshells, excavated from the soil, stripped of toxic contents and halved.

“I wanted to understand how I could make art about war in a way that was not only about war, but about how people survived, and their resilience – especially the resilience of the people in the countryside.”

When he started this work it opened a dialogue with his father, who revealed to him that he had been a soldier with the Pathet Lao Army, the guerrilla “Ghost Army”, which began with 150 soldiers and ended with 10. He told his father he wanted the sculptures to “remind him of the beauty of peace”

A new generation of artists from the Lao People’s Democratic Republic are emerging, following decades of isolation in the orbit of the Soviet empire. The economy is growing rapidly, and the country is opening up. Phothyzan is one of three Lao artists showing work at APT9, a major survey of art from the Asia-Pacific region and beyond. Their voices are tentative, coming from a culture that has avoided contention, a post-war generation commenting on their place in the world.

Gary Stafford, the founder of non-profit contemporary art initiative Elevations Laos, says there has been “a missing generation” from a time when the dislocated country was a battlefield. “People who were teaching postwar were still influenced by the prewar period. Senior artists in Laos that are highly regarded and revered tend to be impressionist, sometimes cubist, and their influence seems to be from their education in France in the 1950s. And then post the 1950s you are into a war, and a very difficult period for Laos which went through to independence in 1975.”

With a censorship that was not overt, but understood, there hasn’t been the market, infrastructure or the encouragement to develop contemporary art practises. Art schools taught traditional art, painting and sculpture; learning was by rote. “In Laos contemporary art thrives in different forms,” says Tarun Nagesh, curator at APT9. “Maybe not the conventional forms that we might be used to in other parts of the world. But it has evolved and survived in a unique and different context.”

Phothyzan had trained formally as a painter at the National Institute of Fine Arts in Vientiane, but after studying in Thailand he discovered installation art, and a powerful desire to comment on social issues. He has involved whole villages in his installations about the damage of deforestation. “They are affected by environmental damage all the time, but they don’t know it yet,” he says. “I want my artwork to reflect the consequences of environmental damage affecting our daily lives, as a result of our thoughtless actions.”

Souliya Phoumivong, a lecturer at the National Institute of Fine Arts, discovered video art when he got a grant to study in Japan. In 2012 he set up his own backyard studio. His stop-motion films, which involve clay buffalo animals have a clear social message, he says. “People choose to follow the trend towards materialism. The hunger for wealth and the hunger to be like other people – many people forget this is the not the real them.”

Phoumivong is telling his viewers not to be a herd animal like the buffalo, but to be an individual. “Buffalo in Laos means stupid. It works hard all his life and knows little about the world. Maybe the buffalo is not stupid; maybe it just never had a chance to study and see the world.”

Tcheu Siong’s work is different again, it comes from the spiritual world of the Hmong people. She is an indigenous Hmoob Dawb woman from a long tradition of textile makers.

“The Hmong are animist so they believe in the spirit world,” says Stafford. “A lot of her spirit beliefs are around motherhood and family and there are a lot of traditional stories she is telling through her work. So her work is more indigenous to her ethnicity.”

Using hand-stitched applique on long cloths, anthropomorphic figures and spirits are coded into the abstract designs – figures often identified by her husband, a Hmong shaman

In 1996 Tcheu Siong moved from the mountains of northern Laos to the city of Luang Prabang. “On the mountain we were pretty poor,” she says, “my only way to make an income was with the needle. In the city I tried many ideas to be different to the others, and ways to embroider that were not the same as everybody else. Now maybe some figures are the same, but their soul is different.”

The figures are of Hmong people living on the mountain. “We have different spirits such as the spirit from outside which we would say were evil. But these are beautiful spirits I am creating, good spirits that protect our house and our family. When I am cutting, in my mind I am seeing these spirits around me protecting me. There is nothing to worry about when I go to sleep, and that is why these figures come out really beautiful.”

In spite of all the years of war, of being locked away from the world, the huge gap in learning, the lack of exposure to different kinds of art – a long silence – it seems the creative spirit is strong in Laos, and can only get stronger.