The Battle for People’s Park, Berkeley 1969: A new oral history of “Bloody Thursday” 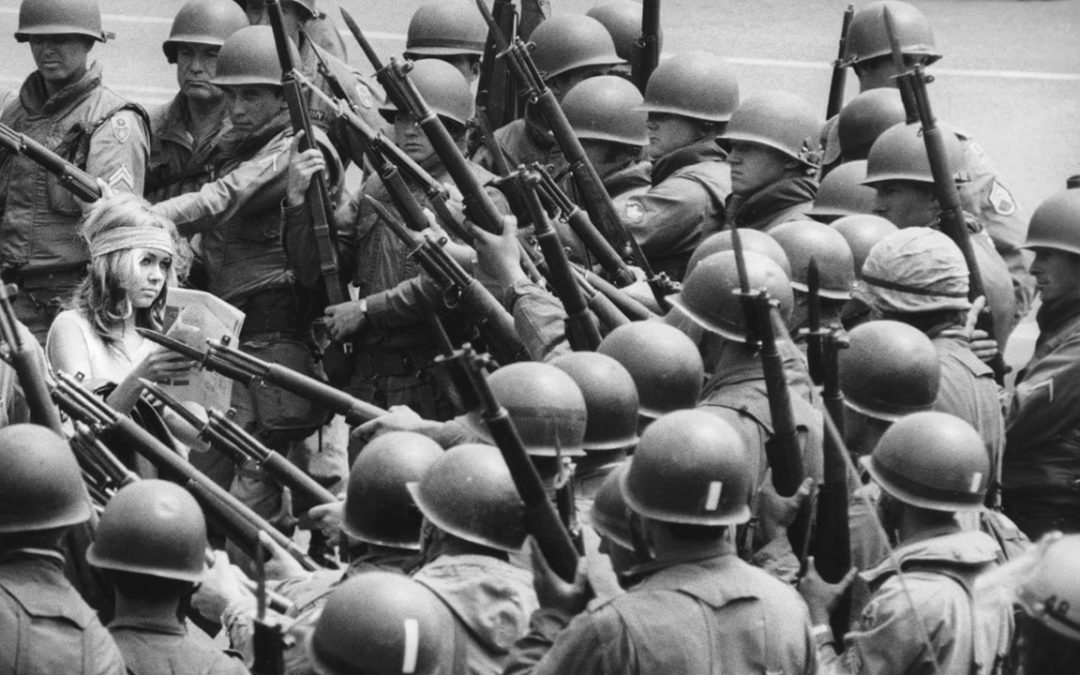 Above: National guard troops confront a protester at Peoples Park in Berkeley, 1969. Photo: Ted Streshinsky/Courtesy of the Streshinsky Family

The following review was published by The Guardian on July 6, 2019

On 4 May 1970, the Ohio national guard shot at hundreds of students protesting against the invasion of Cambodia, wounding eight and killing four. Kent State was seared into the national consciousness. The US government had authorized the killing of its own (white) children.

But what many might not know is that a year earlier in Berkeley, California, police opened fire with buck and bird shot on a large crowd of young protesters seeking to keep open People’s Park, an impromptu community garden on land UC Berkeley wanted to use. Fifty people were hit.

James Rector, a 25-year-old visitor from San Jose, was killed. Alan Blanchard was blinded. Donovan Rundle was shot point blank in the stomach and almost bled to death. After two dozen surgeries, he would live with chronic pain for the next 50 years.

“Bloody Thursday”, 15 May 1969, was the day the Vietnam war came home. The streets of Bohemian Berkeley, the New Left’s west coast HQ, became a bloody war zone. Martial law was declared, a curfew imposed and national guardsmen with unsheathed bayonets and live ammunition occupied the town. A military helicopter doused the campus with tear gas. Many members of the Alameda county sheriff’s department had just come home from Vietnam. Some later admitted that they treated antiwar students like Viet Cong.

This pivotal event in 60s history comes back to life in an excellent new oral history, The Battle for People’s Park, Berkeley 1969, by Tom Dalzell. The book recounts the chaotic 40 days and nights from 20 April to 30 May 1969 with detail that reads like a gut punch. A large-format book, lavishly printed with hundreds of never-before-published color photographs, it is a hybrid oral-visual history that reads like watching a documentary.

People’s Park evokes haunting memories of Kent State. Republican governors in California and Ohio were running re-election campaigns and rallying their base by demonizing the student movement. The chancellors of UC Berkeley and Kent State were out of town on the days of the shootings, contributing to disorder, handing law enforcement greater rein.

In his foreword to People’s Park, Todd Gitlin explains that California’s governor, Ronald Reagan, ran his 1966 campaign on making welfare “bums” go back to work and cleaning up “the mess in Berkeley”. By the time he was running for re-election he had all but granted the national guard and law enforcement officers permission to shoot to kill: “If it takes a bloodbath, let’s get it over with, no more appeasement.”

Describing campus protesters a year later, the Ohio governor, James Rhodes, echoed Reagan, Richard Nixon and Spiro Agnew: “They’re worse than the brownshirts and the communist elements … They’re the worst type of people that we harbor in America.”

The stories Dalzell elicits from Berkeley shooting victims are eerily similar to stories Kent State victims told me when I interviewed them for my own oral history, Witness to the Revolution. Rundle told Dalzell the chilling story of being singled out by a shotgun-toting Alameda county sheriff’s deputy:

“My last thought before the shot was that you should never point a gun at someone. In a split second before I was hit I prayed that the shot was rock salt. He aimed so carefully that I could have hit the deck in time to save myself but I didn’t even imagine that he would shoot. He gave no prior warning of any sort, nor any order to move on. It felt like I’d been hit in the gut with a sledgehammer. The buckshot used on me was packed in a 12-gauge shell that holds nine double-aught pellets. Each is about the size of a .32 caliber bullet. I was shot in the gut with five or six of these.”

Dean Kahler, who has spent 49 years in a wheelchair, paralyzed from the waist down after being shot on the Kent State campus by the Ohio national guard, told me:

“I was in the practice football field when they turned, and lowered their weapons. I thought, ‘Oh my God, they’re going to shoot. Because I’m a farm boy and I’ve carried a rifle and a shotgun, and when somebody makes a deliberate motion like that, and lowers their weapons, pointing directly at you, that’s a sign that they’re ready to shoot … I looked around and there was no place to hide.”

Reminding us how deeply divided the country was in 1969, Rundle recounts being carried into an ambulance when, “Someone heard a bystander say, ‘I hope you die, you fucking hippie.’” Kahler, who like Rundle spent months in the hospital fighting for his life, remembers opening a greeting card that read, “Dear Communist, hippie, radical, I hope by the time you read this you are dead.”

The police and national guard claimed they shot in self-defense. The governors of Ohio and California smeared the unarmed victims. Not one member of law enforcement was convicted of a crime. So much for white exceptionalism.

People’s Park was one square block of turf with a swing set and poetry stand. But it represented much more than the hippie playground political leaders chose to call it. It stood for the social and political aspirations of a generation. As Steve Wasserman writes in his afterword to People’s Park: “The stark and brutal smashing of our hopes was a hammer blow.”

That hammer blow is brought to life in Dalzell’s book, by weaving photography with visceral first-person accounts to bring a reading experience that is beyond the capability of narrative expository writing.