The boys who said no to Vietnam 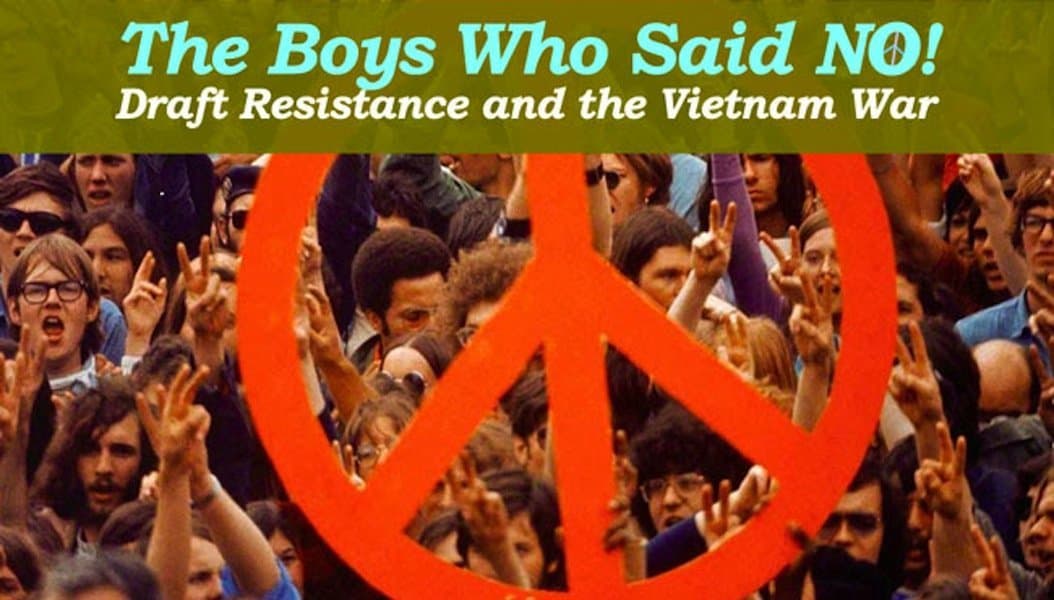 This article originally appeared at ptreyeslight.com.

In his forthcoming documentary “The Boys Who Said NO!,” Christopher Colorado Jones hopes to educate Americans about the power of resistance. The film charts the scope and success of draft resisters during the Vietnam War.

An estimated quarter-million to a half-million men actively resisted deployment during the Vietnam War: some left for Canada or Sweden, but others stayed, choosing to return, burn or ignore their draft cards. Draft resistance was classified a felony that could result in up to five years in prison, and over 3,000 men were jailed as a result.

Mr. Jones says he refused to support the Vietnam War, although that is something of an understatement. He was sentenced to one year in a New Mexico prison after declining to register for the draft in 1967, when he was 18 years old.

“We chose prison because we had a say in the matter about whether we wanted to support the evil, unjust war in Vietnam,” he said. “We had other options—going to Canada, a lot of good people did that—but we decided to make a stand where we lived, in our homes.”

Seven years ago, Mr. Jones organized a reunion of draft resistors. As the 75 attendees reminisced, he said, “it reminded us that people are getting older, some have died, so we wanted to capture their unique stories.”

Two years later he began working on the documentary, and Judith Ehrlich, the Oscar-nominated director behind “The Most Dangerous Man in America: Daniel Ellsberg and the Pentagon Papers” has signed on to direct. So far, the team has interviewed over 30 draft resisters from around the country and spoken to historians about the impact of nonviolent resistance in bringing an end to the war.

One of the men interviewed in the documentary is Tod Friend, the late co-owner of the Tomales Bay Oyster Company and the Marshall Store. Mr. Friend was sentenced to three years in prison for his resistance efforts, which once involved pouring napalm over baskets of stolen draft files and setting them on fire. In describing him, Mr. Jones said, “He was a big football player—a jock and a frat boy at U.C.L.A.—and then he heard David Harris speak at a rally and decided it was more important to resist the war in Vietnam.”

David Harris was a prominent face of the draft resistance movement, creating an organization that encouraged young men to work to end the war. Mr. Harris recalls Mr. Friend fondly, though he added, “he was Curly to me.” “Curly was one of my favorite people. I remember him quite well—it wasn’t often that we recruited a D1 football player. He was a real stalwart; when it came time to stand up about something, Tod was there,” he said.

On Nov. 25, Mr. Jones will host a screening of act one of his film at the Dance Palace, and says he will likely play Mr. Friend’s full interview. The event is part of a fundraising initiative. Mr. Jones said that most of the project’s funding has come through individual donations: almost $490,000 from over 800 people. But, he said, “We still need to raise a whole bunch of money to finish it.” A large chunk of money will go toward purchasing archival material, he said.

Blanche Chase, an archival researcher for the documentary, said, “If you want to hear and see Walter Cronkite taking off his glasses and looking sternly at the camera, that’s expensive: more than $100 a second.”

For historical documentary buffs, Ken Burns’s 2017 “The Vietnam War” might seem to be the decisive voice on the topic. But Mr. Jones is not a fan. Mr. Burns and his co-director Lynn Novick “didn’t cover the anti-war movement at all, or the impact young people resisting had [or] the veterans who became opposed to the war,” he said. He went on, “As part of the film we interviewed historians, and it turns out that this has been covered up—that the young people in the peace movement had a really profound impact on stopping the war in Vietnam and ending the draft.”

Michael Foley, a senior lecturer at the University of Sheffield who specializes in the Vietnam War and social movements generally, is interviewed in the documentary. “Draft resisters were, for several years, the leading edge of the antiwar movement,” he said. As an example of that influence, Dr. Foley pointed to an instance in 1968 when General William Westmoreland’s request for an addition 206,000 troops faced pushback by the Johnson administration over concerns that it would inflame the draft resistance movement further.

Mr. Foley added that he believed “The Boys Who Said NO!” would be “the best [piece of media] yet to show the national scope and influence of draft resistance.”

A rough cut of the documentary was four hours long, but the team has since been whittling away, aiming for 90 minutes. Mr. Jones has reached out to PBS, but also wants the film to be viewed in schools.

“It’s going to blow resistance people away today to find out about our movement,” he said. “What we were saying is you have to follow your heart and think for yourself and not be a sheep that follows your billionaire government. Once they see our film, [young people] will be inspired by the power of people who are nonviolent and who follow moral principles, because that’s what seems to be lacking right now in our country.”

Mr. Foley, too, hopes the resisters of today can take some lessons from those of the past. “I wish the folks participating in the current resistance movement had a better understanding of the history of resistance in the United States because there is an enormous tool kit of strategies and tactics available in that history,” he said. “Certainly, there is plenty of inspiration to be found there, and that could be useful in sustaining the present movement, even in the darkest days.”

A celebration of Tod Friend and a screening of Part 1 of “The Boys Who Said NO!: Draft Resistance and the Vietnam War” takes place from 4 to 7 p.m. on Sunday, Nov. 25 at the Dance Palace Community Center, in Point Reyes Station. $20. For information and tickets, visit boyswhosaidno.com.