The Moral Case for Draft Resistance 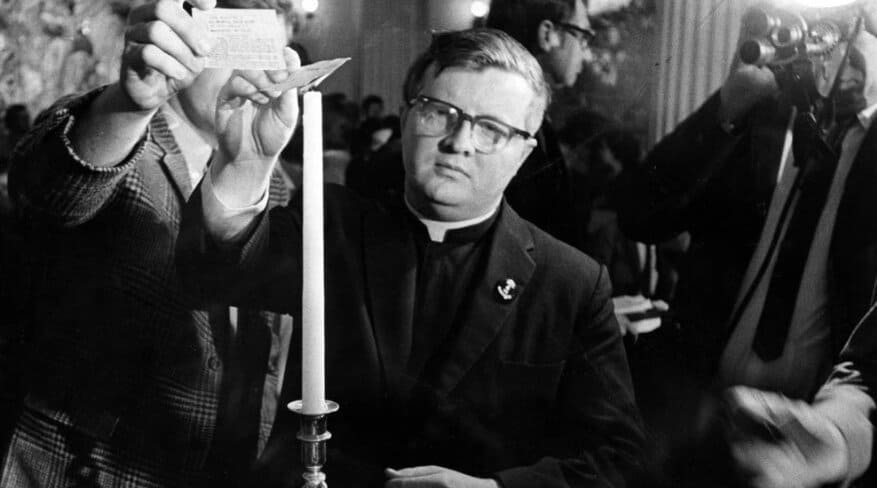 On Monday, Oct. 16, 1967, Americans gathered by the thousands in cities and on campuses all over the country for the first “Stop the Draft” week. On the steps of federal buildings, city halls and university buildings, hundreds of young men protested the Vietnam War by turning in their draft cards — a national act of civil disobedience.

In Boston, draft resisters assembled in the historic Arlington Street Church and turned in their cards in what seemed like a sacramental rite. They moved solemnly up the aisle, some in tears, and deposited their draft cards in offering plates. Others burned their cards in the flame of a candle held by a candlestick once owned by the abolitionist preacher William Ellery Channing.

Reflecting on the moment when he turned in his draft card, James Oestereich, a seminarian in Boston, said, “It’s hard” to confront one’s government during wartime. “We know how to pay our taxes … but we don’t know how to oppose our government in a way that’s responsible and that will be listened to.”

In the national memory of the Vietnam War, anyone who violated draft laws is typically seen as selfish, cowardly and unpatriotic. It was one thing for civil rights activists to confront the government by breaking the law; by 1967, many of them were regarded as among the nation’s finest citizens. But if a citizen defied the draft laws to take a similar stand, few saw it as the resisters did: as a desperate appeal to the nation’s highest ideals.

Certainly, President Lyndon Johnson did not understand. When draft resisters showed up in Washington on Oct. 20 with nearly 1,000 draft cards collected from all over the country and turned them in at the Justice Department, he was furious. Johnson raged privately about whomever “the dumb sonofabitch was who would let somebody leave a bunch of draft cards in front of the Justice Department and then let them just walk away,” and ordered the attorney general, the F.B.I. and the Selective Service to investigate.

If the president had been better briefed, he would have known that the week’s theme of moving “from protest to resistance” came in large part from the expectation that thousands of draft-age men would deliberately defy draft laws. And he knew enough about the draft that he should have seen these protests coming.

By 1967, it made sense for protesters to target the Selective Service System. Nearly everyone agreed that the draft did not operate fairly. Since the 1950s, the government faced a fundamental problem administering a peacetime system of conscription: The baby boom produced too many draft-age men. Even during the Vietnam War, the military enlisted or drafted fewer than 11 million draft-age men out of a pool of nearly 27 million. Under the direction of Gen. Lewis Hershey, the Selective Service fashioned a system of deferments and exemptions that local draft boards awarded to registrants for pursuing certain activities outside the military, such as going to college or medical, dental or divinity school; serving in the reserves; or working for a defense contractor.

By 1966, as draft calls increased dramatically, the system of deferments came under intense criticism. In response, President Johnson appointed a commission that confirmed the inequities of the system. In effect, the draft turned the Vietnam War into a “working-class war,” as the historian Christian Appy has labeled it, with disproportionate numbers of the poor and working-class sent to Vietnam while everyone else seemed to go off to college.

Meanwhile, revelations from a 1965 Selective Service training kit exposed the draft not only as unfair, but as a vast social engineering project. In the so-called “channeling memo,” first published in New Left Notes in January 1967, General Hershey wrote to draft board officials that the process of delivering a few thousand men to induction centers “is not much of an administrative challenge,” Rather, General Hershey declared, “it is in dealing with the other millions of registrants that the System is heavily occupied, developing more effective human beings in the national interest.” Too bad no one told the American public that the real point of the draft was to develop “more effective human beings.”

Yet, through the use of “channeling” — of wielding the threat of induction to push young men into activities the Selective Service saw as advancing the “national interest” — the draft produced a “psychology of granting wide choice under pressure.” This, General Hershey claimed, was “the American or indirect way of achieving what is done by direction in foreign countries where choice is not permitted.”

The channeling memo exposed a coercive draft system that took a generation of men and threw them into an arena to compete with one another, in a competition few of them would have chosen for themselves. Getting a deferment meant survival. For the men who became draft resisters and for their supporters, the realization that they were compelled to play an undemocratic game that privileged some Americans over others only reinforced their sense that the United States had strayed from its most cherished values.

They did not take their decision to resist the draft lightly. As children of the Second World War generation, they had thought of their country as a leader of nations: The United States had defeated fascism abroad, prosecuted Nazi war criminals and brought the United Nations to New York.

As they came of age, however, they saw Lyndon Johnson escalate the war in Vietnam almost unilaterally, killing hundreds of thousands of Vietnamese civilians and tens of thousands of Americans. Instead of being a model nation, the United States now faced international condemnation, even from allies, over its use of overwhelming military power. After years of signing petitions, writing to their congressmen and turning out for large-scale demonstrations, to no avail, draft resisters now upped the ante.

A loose coalition of “Resistance” organizers planned the national draft card turn-in. They were inspired by the civil rights movement, the Berkeley Free Speech Movement (during which one of its leaders, Mario Savio, described having to “put your bodies upon the gears, and upon the wheels, and upon the levers” in order to stop the operation of an odious “machine”) and the precedent of resisters such as Muhammad Ali. By risking indictment, they thought that they could put the Johnson administration — and the war itself — on trial in court proceedings all over the country.

Tens of thousands of Americans supported draft resisters by signing their names to complicity statements. The most prominent of these, “The Call to Resist Illegitimate Authority,” was written by intellectuals and first published in The New York Review of Books and The New Republic. The “Call” emphasized documented incidents of American war crimes in Vietnam, and called on Americans to support draft resisters, whom signers saw as “courageous and justified.”

Few were radicals. Boston draft resisters, for example, were mostly middle to upper -middle class, the children of Democrats who presumably voted for Johnson in 1964. Most important, 82 percent of them held deferments that protected them from being drafted. By breaking the law, they willfully made themselves vulnerable to prosecution and to being called for induction. These were hardly the acts of cowards.

“There was something of the flying trapeze in these maneuvers now,” Norman Mailer reported when the draft cards were returned to the Justice Department. The commitment to an uncertain future that might involve a prison sentence was like a “moral leap which the acrobat must know when he flies off into space,” he wrote. “One has to have faith in one’s ability to react with grace en route, one has,” he concluded, “to believe in some kind of grace.”

Neither President Johnson nor General Hershey saw any grace in draft resistance. Hershey responded enthusiastically to the president’s order to act on draft resistance by instructing draft boards to reclassify and call for induction anyone who turned in their draft cards — actions that the Supreme Court later ruled (in the case of James Oestereich, among others) unconstitutional.

And although draft resisters expected to be arrested and prosecuted, Attorney General Ramsey Clark surprised them by indicting only a handful of ringleaders, including the famed pediatrician Dr. Benjamin Spock. (The convictions in that trial were overturned on appeal.)

The draft resisters’ mass civil disobedience strategy did not work out the way they planned; they did not get the chance to put the war on trial in hundreds of federal court proceedings all over the nation. But Johnson administration papers show that the president did not grant General William Westmoreland’s request for 206,000 additional troops in part because so many administration officials predicted more draft resistance, on an unprecedented scale.

Fifty years later, it is worth remembering the place of draft resisters in the American tradition of dissent. By escalating protest against the war and risking their own freedom they kept alive a vital form of citizenship.

Michael Stewart Foley is author of “Confronting the War Machine: Draft Resistance During the Vietnam War.”