The person quest behind photo of embracing enemies in Vietnam war

This article originally published at Tuoitrenews.vn 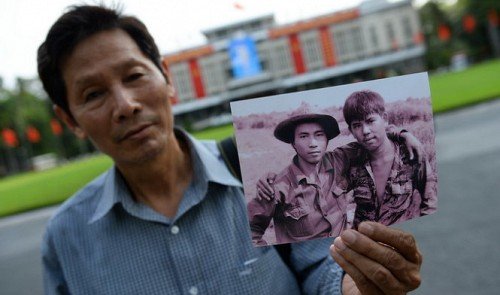 Chu Chi Thanh still has one of his most treasured photos, in which two Vietnamese soldiers from enemy armies shared a pose, solemnly hung in his room as his search to identify those in the rare picture remains unfinished.

An audio version of the story is available here

Now in his 70s, the former Vietnam News Agency photojournalist still has a clear memory about the photo, which he said was taken in April 1973 at the Long Quang border line in Trieu Trach Commune, Trieu Phong District of the north-central province of Quang Tri.

The area was closely watched and guarded by the Vietnamese army in the North and the pro-American South Vietnam during the wartime before 1975.

Thanh said he was so moved seeing two enemies, still in their different army uniforms, embrace each other to pose for a photograph that he forgot to note their names after capturing the picture.

“It is the image of peace and national concord,” he said. 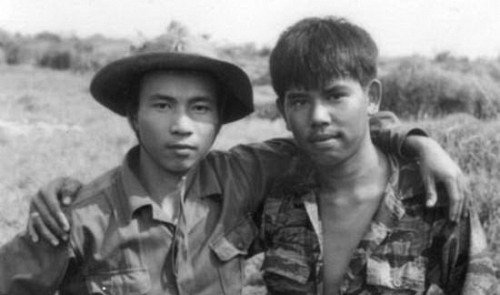 The historic photo with two enemy soldiers. The soldier of the north (L) is identified as Duong Minh Sac while the marine of South Vietnam has not been identified.

Thanh said he and his colleague, Tran Mai Huong, were “surprised at what was happening” when they were assigned to the Long Quang station.

Soldiers of both sides pointed guns towards each other during daytime but the situation was different in the evening, he said.

Soldiers of the north loudly called over across the frontline and waved at soldiers of the south, inviting them to have fresh tea.

Thanh at first thought it was a joke.

“But minutes later, a group of four or five ‘southern soldiers’ crossed the borderline, which was heavily guarded with weapons, to join the ‘northern soldiers’ in their huts, where they then talked with each other cheerily,” he recalled.

Seeing Thanh holding a camera, a marine of the south asked the photojournalist to shoot a photograph for him with a soldier of the north.

“Journalist, please shot a keepsake photo for me and this soldier,” Thanh recalled the marine’s words.

Then, the two soldiers from two enemy armies came to stand side by side, embraced each other in their arms, and smiled innocently to pose for what has later become one of the most precious photos of Thanh.

Thanh said he shot several photographs and was so moved at seeing the touching moment that he forgot to ask their names.

Quest for the soldiers

After peace was restored across Vietnam in 1975, Thanh brought the photograph to many of his colleagues and veterans, hoping they could help recognize their identities. Thanh contacted Phan Tu Ky, former head of an army unit in Trieu Trach during the period of 1972-73.

Ky had tried his best to help Thanh but all efforts were in vain, until mid-April, when he knew that a group of veterans would visit the Long Quang border line.

More than 20 veterans in the group were asked to have a look at the historic photo, but none of them recognized those in the picture.

The photograph was then sent to all liaison boards in the Vietnamese army.

Finally, on April 21, a veteran named Do Thanh Cham told Thanh on the phone that the soldier of the north in the photograph is Duong Minh Sac, born in 1954.

Cham said Sac were sharing their childhood in the same village in Kim Quan Commune, Thach That District, Hanoi, before becoming close friends in the wartime.

However, Sac died of diseases several years ago, Cham said.

The veteran then gave the address of Sac’s wife, who resides in the central province of Thua Thien-Hue, to a Tuoi Tre (Youth) newspaper journalist.

As the woman, Do Thi Thim, was contacted by the Tuoi Trecorrespondent, she confirmed that the soldier of the north in the photograph is her late husband.

Thim said she met Sac when they worked in Russia in 1990 and married a year later.

“In 2008, Sac insisted to be taken to visit the former battlefield in Quang Tri, and his wish was fulfilled,” Thim said.

“He died the following year.”

The former Vietnam News Agency photojournalist is now hoping he will soon be able to identify the other soldier in the picture.

He also hopes the community will give him a helping hand in the quest.

“I always consider the photograph the symbol of national concord,” he said.