The Women Who Won the Vietnam War 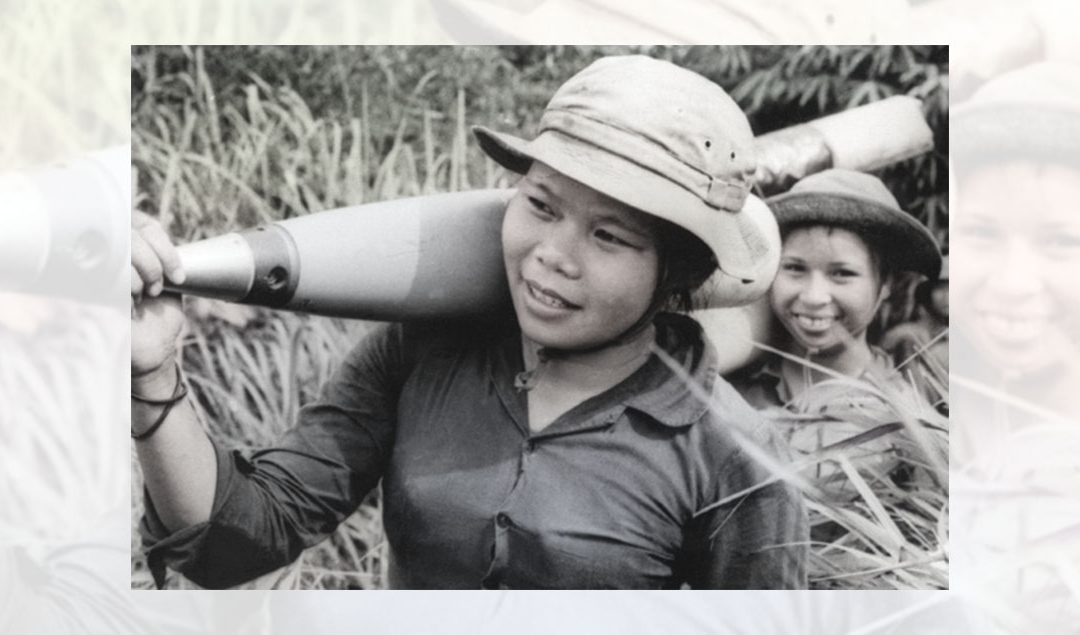 I stood on the front porch of the modest stone house in Quang Binh Province in the north of Vietnam looking at the splendid Trường Sơn Mountains on the horizon where the young Nguyễn Thị Kim Huế  had served during the Vietnam War (1965–1975). In a spirit of reconciliation, forty years on, I had traveled down the Ho Chi Minh Trail to explore not only the other side of the war, but its gendered side. A handsome woman, tall and slim, arrived to greet me. She invited me in to talk about her harrowing days defending the Trail where she had served as the leader of a majority-female platoon between 1965 and 1967.

The Trail was the military supply route ferrying fighters, weapons and rice from Hanoi to communist supporters in South Vietnam. NLF forces were fighting against U.S. and South Vietnamese government forces opposed to the reunification of the country promised in the 1954 Geneva Accords that ended the First Indochina War (1946–1954).

The Vietnam War is remembered in the United States as a macho war fought mainly by men. It was anything but. Women fighters in North Vietnam played a key role in stopping the most intense bombing in modern times. The U.S. Air Force and Navy dropped over 7 million tons of bombs over North and South Vietnam, Laos, and Cambodia, more than twice the total of U.S. bombings over Europe and Asia during World War II. In South Vietnam, women helped defeat of U.S. and South Vietnamese ground and air forces. Yet, fifty years on, the history of the women who defeated a superpower, while celebrated in Vietnam, remains largely unrecognized and undocumented in our history of the war.

Nguyễn Thị Kim Huế  was one of one hundred and thirty eight thousand Youth Volunteers. Some enlisted. Most were drafted. Aged between 17 and 24, the all-female and mixed-sex units were stationed on the Ho Chi Minh Trail to defend the military supply route against the U.S. air war. A further 1.7 million women over 24 joined Women’s Union militias to defend their homes, villages, and towns. They built trenches, repaired bombed roads, transported ammunition, and shot down U.S. planes bombing bridges, roads, and towns. In South Vietnam, an estimated one million women, known as the Long-Haired Army, fought directly with the National Liberation Front (NLF)— the Viet Cong to us—serving as snipers, spies, ammunition carriers, medics and cultural troops. The NLF co-founder and deputy commander was the female revolutionary Nguyễn Thị Định (1920–1992).

An expert markswoman, Nguyễn Thị Kim Huế was stationed with her platoon on the Mu Gia Pass, the most dangerous stretch of the Trail network. A month after she enlisted in 1965, the U.S. unleashed Operation Rolling Thunder, a sustained bombing campaign against North Vietnam intended to interdict transportation routes and stop the spread of communism.  Youth Volunteer brigades were in charge of decommissioning unexploded bombs to keep the truck convoys moving south. They detonated the explosives at close range without the benefit of remote controls. They moved earth with shovels and wheelbarrows to fill the bomb craters. They transported ammunition between Trail stations and they served in the People’s Army’s anti-air defense units posted along the Trail.

Nguyễn Thị Kim Huế  remembered the April 1966 bombing when more than half her team perished. The U.S. Strategic Air Command B-52 bombers dropped some 600 tons of 500 and 750-pound bombs during the first strike alone, “the largest bombing operation since World War II.”

“We had to rebuild the road every day because there were so many bombs… The worst B-52 attacks were in 1966. In my platoon, out of sixteen, ten were killed,” she said.

“Were you wounded?” I asked.

She parted her hair to show me the deep scar shrapnel had left on her skull.

“Were you afraid?” I asked

“No. Fear of what? You live once and you die once,” she replied.

As Nguyễn Thị Kim and her platoon carried out dangerous work in a dangerous place, they lacked basic necessities. She described how she looked after her team, trying to make an inhumane situation bearable. “The war was hard for women,”  she said.

The young women had left home for the first time to take up their posts in the malaria-infested jungle of the Truong Son Mountains where they lived in caves and underground tunnels. To keep her team from going hungry on meagre army rations, she bartered with the villagers for a few chickens and pigs and one cow. To increase the women’s comfort, she obtained a change of clothes from headquarters. To alleviate period pain, they gathered medicinal plants in the jungle. For protection, when the U.S. began dropping “people-sniff” bombs—tree-like heat-sensor bombs that detected body movements in the jungle— they built individual bomb shelters by the roadside. After the bombings, she searched for teammates buried in the explosions to give them a decent burial.

“Many died because rocks fell on them. We used shovels because I was afraid a digger would cut [my teammates’]  bodies into pieces. After a few days, we sniffed the soil. There was no smell so we knew there were no more body parts to find. I didn’t want to let them die naked.”

Almost all veterans were haunted by memories of friends who had been blown up, of picking up body parts, and of burying them without knowing which part belonged to who.

Yet Vietnamese women military leaders, fighters and peacemakers are largely absent from our history, their role relegated to a few paragraphs, and their contributions not seriously documented. A notable exception was Even The Women Must Fight: Memories of War from North Vietnam (Wiley, 1998), a scholarly treatment by Karen Gottschang Turner with Phan Thanh Hao.

Recording and teaching the other side of war, while a step towards peace through our understanding of the other side, may appear to disrespect America’s veterans and the fallen. Obviously, from the American perspective, North Vietnamese and Viet Cong women fighters were enemy combatants. Yet, even women soldiers who were allies in our twentieth century wars have only recently joined the pantheon of history. The 800,000 women who served in the Soviet Armed Forces in World War II, were recently given a place in history thanks to Svetlana Alexievich’s ground-breaking The Unwomanly Face of War (Penguin 2015) which won the Nobel Prize for Literature. (First published in Russian in 1985, it appeared in English translation thirty years later in 2015.)

Women soldiers, I suspect, are marginalized because they serve mainly in “support” rather than combat roles. Ho Chi Minh, Stalin and Churchill introduced the draft for women only when they were needed to “replace” men fighting on the frontlines. We tend to record and reward frontline combat for the number of Killed in Action (KIAs) or its equivalent. Support roles, ostensibly exposed to a lesser degree of violence, are generally considered less worthy of military medals and honors even though support roles can be as heroic. In any event, North Vietnamese women, although drafted into roles behind the lines ended up on the front lines of the U.S. air war that targeted the whole of North Vietnam, obliterating coastal towns into as many little Dresdens (and beyond into Laos and Cambodia) from the East Sea to the Truong Son Mountains.

Women’s place in history is further minimized by patriarchal attitudes. Most historians, journalists and commentators who covered and wrote about the Vietnam War from our side are men. U.S. popular culture did even worse. The majority of Hollywood films on the war—180 of them—portray Vietnamese women as prostitutes, rape victims—I would rather say survivors—or, if fighters, as sociopathic killers.

Without glamorizing war or women warriors, the fighting women of North and South Vietnam played a key military role in defending their families,  land, and country. They helped defeat two superpowers—the French in 1954 and the Americans in 1975—whose armed forces were made up primarily of men. Along with the best of them, they were brave, they were expert markswomen, they performed heroic acts rewarded with honors and medals by their government, and displayed exceptional leadership qualities. They provided their teams with food, clothing, medicine and a decent burial, a holistic approach to be emulated in the military today.

After the war, Vietnamese women veterans were equally prominent as peacemakers. At the 1973 Paris Peace talks, Nguyen Thi Binh (1927–), who negotiated on behalf of the Viet Cong, was credited for advancing the peace process thanks to her diplomatic skills. The women veterans I talked to held no personal animosity against the U.S., although many believed the U.S. had a responsibility to compensate Vietnamese victims of Agent Orange and unexploded ordnance.

Even though they were once enemy combatants, North Vietnamese and South Vietnamese women veterans deserve an important place in our history of the Vietnam War.