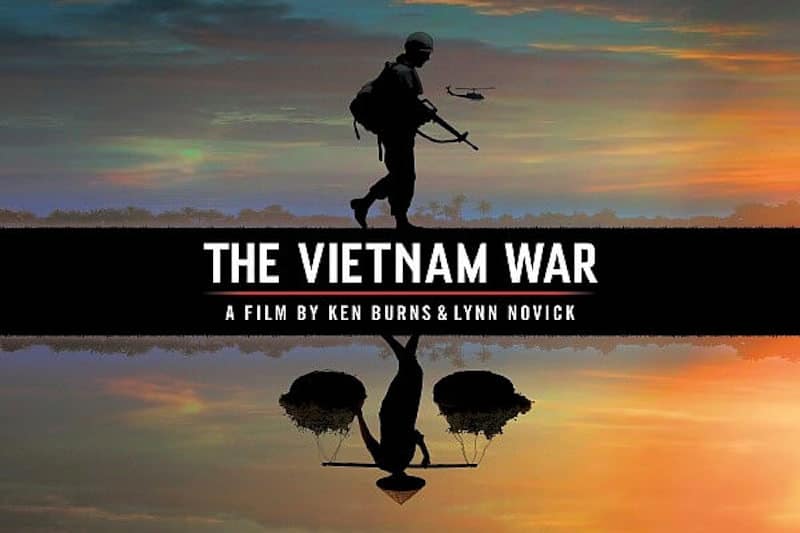 James W. Russell teaches political science at Portland State University. His most recent book is Social Insecurity: 401(k)s and the Retirement Crisis. He was the first editor of New Left Notes, the national newspaper of Students for a Democratic Society.

I recently watched the 18-hour Burns/Novick PBS documentary, The Vietnam War, over a ten-day period, one episode a night. I had previously read many of the criticisms of the film from veterans of the antiwar movement. I had also returned in March from a two-week tour of Vietnam as part of a delegation of activists from the antiwar movement to commemorate the 50th anniversary of the My Lai massacre. We participated in the commemoration with a delegation from Veterans for Peace.

Three of the fundamental problems of the film, as I see it, are:

Interpretation of the U.S. soldiers: The main message is that the U.S. troops fought valiantly in a mistaken and losing war and they are to be thanked for their sacrifices. I’m sure the German Army also fought valiantly and sacrificed heavily in World War II. But there would be huge protests if a Burns/Novick-like film was made about that losing army. A better interpretation would have been that significant numbers of soldiers turned against the war when they realized that the U.S. invasion was unjust and their military and political leaders had duped them. The film does cover the soldiers’ own antiwar movement but in a more confused manner where the motives are mixed. While the prowar captured pilots and other POWs are celebrated, no mention is made of the captured pilots and other POWs who became opposed to the war.

Anti-intellectualism: No academic experts were interviewed on the meaning of the war. Rather, the “expert” commentators were from the State Department, CIA, and military. The only academic interviewed was a graduate student who became an assistant professor. But he was not interviewed as an expert on the war but rather for expressing the point of view of a protester.

Attitude toward the antiwar movement: Antiwar protesters come off as having suspect motives. Burns/Novick present as fact the right-wing narrative of antiwar demonstrators attacking returning solders at Travis Air Force base, which did not happen according to recent scholarship. The most egregious attack on the antiwar movement occurs in the last episode when a former antiwar demonstrator states that she is ashamed of calling soldiers “baby killers.” That is the parting interpretation of the antiwar movement, leaving the impression of it as being at least mildly unpatriotic and anti-soldier. A soldier who deserted to Canada states that he regrets renouncing his U.S. citizenship and is presented as now a man without a country. No mention is made of prominent historians and other scholars who actively opposed the war. Nor is there mention of the impact of the war on a whole generation of young scholars and the influence it had on their subsequent work.

The roles that a number of individuals play directly or indirectly in the film are problematic.

Peter Coyote (the narrator): He was with the San Francisco Mime Troupe which was radically antiwar and pro-NLF. I’d love to know if he agreed with all of the script that he read. He was at Wisconsin when R.G. Davis, the director of the Mime Troup, stated to a show audience that they should go to the Dow demonstration the next day. “We believe this is your university. If you can’t control it, you ought to destroy it.” The university was allowing Dow to recruit future employees. Antiwar students were demonstrating against the recruiters because of Dow’s production of napalm for the war. The Madison police violently broke up the sit-in with clubs and tear gas. It was the first time in the country that police attacked rather than carried off Vietnam antiwar sit-in protesters.

Jane Fonda: The film repeats as fact the right-wing narrative on Jane Fonda having been a traitor who went to North Vietnam. (I’d be curious to know if Peter Coyote had any qualms reading thatnarration.) No mention is made that Telford Taylor, the chief U.S. prosecutor at the Nuremberg War Crimes trial, also went to North Vietnam and spoke out against the U.S. bombing.

John McCain: The myth of John McCain as the innocent pilot who was shot down and tortured goes unchallenged, whereas John Kerry’s Senate committee testimony of U.S. war crimes is immediately challenged with a military figure getting the last word that any abuses were isolated aberrations.

Bob Kerrey: Along with John McCain and John Kerry, former Senator and New School President is mentioned positively as a veteran of the war, who has worked for reconciliation of the U.S. and Vietnam. No mention is made of his background as an alleged war criminalwho led and participated in a massacre of civilians in Ben Tre province. Although he was never charged with war crimes in the United States, his role leading the massacre is highlighted in the War Remnants Museum in Ho Chi Minh City and on a memorial at the site of the massacre.

Despite all of the problems with the film, I think its overall impact on American consciousness about the war is more positive than negative. Burns/Novick present the war as a well-intentioned mistake by American policy makers. It was, in their words, “begun in good faith by good men.” While there is plenty to object to in the notion that the war was begun by good men with good intentions, the overall impression remains that it was a mistake. And it wasa mistake that kept getting worse with more and more soldiers being sacrificed to it in horrific fighting, and of course many more Vietnamese (though that does not seem to have been a prominent concern in the film). That’s, I think, the main impression that the film leaves with viewers. It certainly doesn’t leave any impression of the war as having been glorious.