Thomas Melville, antiwar protester and one of the ‘Catonsville Nine,’ dies at 86 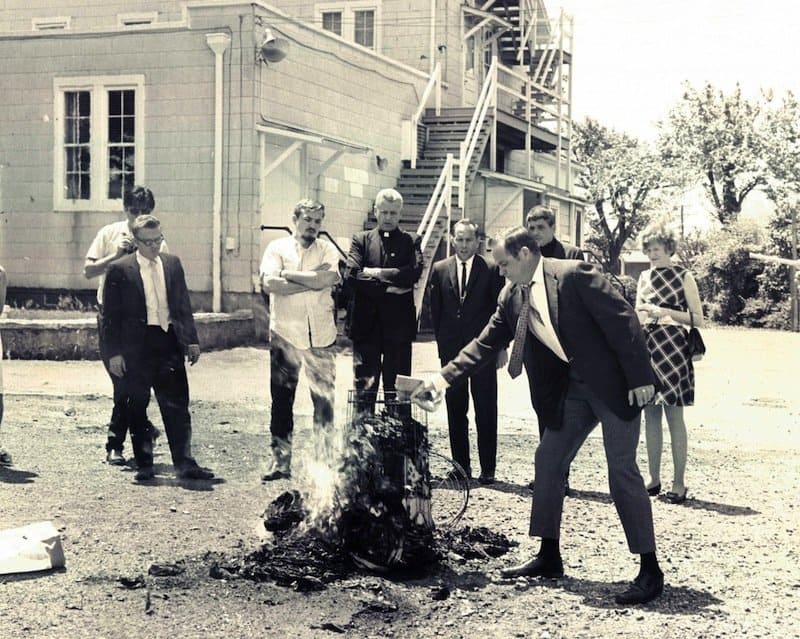 Thomas Melville putting more fuel on fire as Philip Berrigan and Daniel Berrigan and the rest of Catonsville Nine watch records burn at the Selective Service office in Catonsville, Md., on May 17, 1968. (William L. Laforce/Baltimore Sun )

This article originally appeared at theWashingtonPost.com.

Thomas R. Melville, a former Maryknoll priest and social justice activist who in 1968 participated in a high-profile act of civil disobedience against the Vietnam War, the burning of military draft records in Catonsville, Md., died May 1 at a nursing home in San Diego. He was 86.

The cause was complications from back injuries in a fall, said his wife, Marjorie Melville, a former Catholic nun who also participated in the raid.

On May 17, 1968, the Melvilles were among nine Catholic activists who stormed a draft board office in Catonsville, a suburb of Baltimore, seized 378 draft records and burned them in a parking lot outside in a homemade concoction of napalm.

They distributed a statement to bystanders, including many reporters who had been tipped off in advance of the burning. “We destroyed these draft records because they exploit our young men and represent misplaced power concentrated in the ruling class of America,” the statement read in part. “We confront the Catholic Church, other Christian bodies, and the synagogues of America with their silence and cowardice in the face of our country’s crimes.”

At the scene “we prayed for peace and waited for the police,” George Mische, one of the organizers, wrote in a 2013 issue of the National Catholic Reporter. The group included two other Catholic priests, brothers Daniel and Philip Berrigan, probably the best known of the nine. Found guilty of destruction of government property, all received federal prison sentences ranging from 24 to 42 months, after a trial that drew international media coverage.

The raid by the Catonsville Nine — as they were dubbed by the media — came six months after the antiwar March on the Pentagon in October 1967, which spawned Norman Mailer’s celebrated nonfiction novel, “The Armies of the Night.”

Like its Pentagon predecessor, the raid by the Catonsville Nine would leave a literary legacy, giving rise to a play about the trial and two movies. It also inspired similar raids on draft boards across the country.

As much as anything, the burning of the draft records came to represent an already troubled year in American history: More than 500,000 U.S. troops were committed to the Vietnam War; the Tet Offensive, in which tens of thousands of North Vietnamese troops attacked South Vietnamese cities, further elongated the conflict; in a stunning announcement, President Lyndon B. Johnson withdrew from seeking a second term; and the Rev. Martin Luther King Jr. and Sen. Robert F. Kennedy (D-N.Y.) were assassinated.

Mr. Melville, a former missionary in Guatemala, had just returned to the United States before he became involved with the burning in Catonsville. He said at his trial that he saw a parallel between what he had seen regarding social and economic injustices in Guatemala and the situation in Vietnam.

For him, the raid in Catonsville was an attempt to “distinguish before the American people that there is no court of appeal for the Guatemalan people or the Vietnamese people in the face of U.S. military might.”

Thomas Robert Melville was born in Boston on Dec. 5, 1930. As a Maryknoll priest, he was assigned in 1957 to Guatemala, where he worked on economic development and social justice projects. But in this process, he lost the support of the Catholic Church hierarchy, the U.S. Embassy and Guatemalan authorities, Marjorie Melville said, and in 1967 they were both ordered out of the country.

They received permission to leave their religious orders. They married in 1968 and made contact with the plotters of the Catonsville raid.

At their sentencing, Mr. Melville received three years in the federal prison at Lewisburg, Pa., and Marjorie Melville was sentenced to two years at the women’s prison in Alderson, W.Va. With time off for good behavior, he served 18 months, she nine.

He wrote several books with his wife, including “Guatemala — Another Vietnam?” (1971), as well as “Through a Glass Darkly: The U.S. Holocaust in Central America” (1998). He held a variety of jobs, in real estate and health care, while she taught at the University of Houston and the University of California at Berkeley.

Since 1995 they had lived in San Quintin on the west coast of Mexico’s Baja Peninsula.

In addition to his wife, Mr. Melville is survived by two children, Marita Melville of San Quintin and Tom Melville of Vacaville, Calif.; seven grandchildren; and a great-grandson.

Mr. Melville was wearing a black baseball hat with the number 9 on it. People always asked him, he said, if he regretted burning the draft files.

“There’s no way that I’m sorry,” he told the Baltimore Sun.