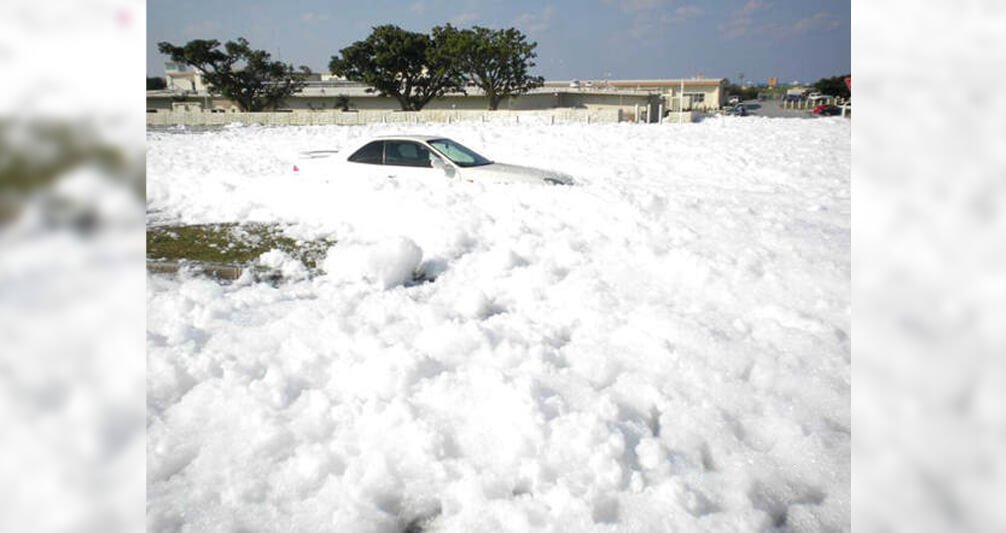 By David Swanson, World BEYOND War

A new book by Jon Mitchell, called Poisoning the Pacific: The US Military’s Secret Dumping of Plutonium, Chemical Weapons, and Agent Orange, tells this story. Like all such catastrophes, this one escalated dramatically at the time of World War II and has continued ever since.

Mitchell starts with the island of Okunashima where Japan produced chemical weapons during World War II. After the war, the United States and Japan dumped the stuff into the ocean, stuck it in caves and sealed them shut, and buried it in the ground — on this island, near it, and throughout various parts of Japan. Putting something out of sight was apparently going to make it disappear, or at least burden future generations and other species with it — which was apparently just as satisfactory.

“Between 1944 and 1970,” Mitchell tells us, “the U.S. Army disposed of 29 million kilograms of mustard and nerve agents, and 454 tons of radioactive waste into the ocean. In one of the codenames beloved by the Pentagon, Operation CHASE (Cut Holes and Sink ’Em) involved packing ships with conventional and chemical weapons, sailing them out to sea, and scuttling them in deep waters.”

The United States didn’t just nuke two Japanese cities and a wide area to which the radiation spread, but also numerous other islands. The United Nations actually handed islands over to the United States for safe keeping and the development of “democracy,” and it nuked them — including Bikini Atoll which the world had the decency to name a sexy swimsuit after, but not to protect, and not to compensate the people forced to evacuate and still unable to safely return (they tried from 1972 to 1978 with bad results). The islands of various atolls, when not utterly destroyed, have been ruined with radiation: the soil, the plants, the animals, and the surrounding sea and sealife. The radioactive waste produced was not a problem, thank goodness!, since all that was required was to hide it out of sight, for example under a concrete dome on Runit Island that was guaranteed to last for 200,000 years but is cracking already.

On Okinawa some 2,000 tons of unexploded WWII ordnance remains in the ground, periodically killing, and likely to take 70 more years to clean up. But that’s the least of the problems. When the United States was done dropping Napalm and bombs, it turned Okinawa into a colony that it labeled “the junk heap of the Pacific.” It moved people into internment camps so that it could build bases and ammunition storage areas and weapons testing areas. It displaced 250,000 out of 675,000 people, using such gentle methods as tear gas.

When it was spraying millions of liters of Agent Orange and other deadly herbicides on Vietnam, the United States military was sending it its troops and weapons from Okinawa, where a middle school suffered from a chemical weapons accident within 48 hours of the first troops being sent off to Vietnam, and it got worse from there. The USA tested chemical and biological weapons on Okinawans and on U.S. troops on Okinawa. Some of the chemical weapons stockpiles it shipped off to Johnston Atoll after Oregon and Alaska rejected them. Others it dumped in the ocean (in containers that are now wearing out), or burned, or buried, or sold to unsuspecting locals. It also dropped nuclear weapons into the sea near Okinawa accidentally, twice.

Weapons developed and tested in Okinawa were deployed to Vietnam, including napalm strong enough to burn flesh under water, and stronger CS gas. The color-coded herbicides were used in secret at first, because the United States didn’t know that it could count on the world to accept its claim that targeting plants rather than humans (except as collateral damage) made it legal to use chemical weapons. But the herbicides killed all life. They made the jungles go silent. They killed people, made them ill, and gave them birth defects. They still do. And this stuff was sprayed on Okinawa, stored on Okinawa, and buried in Okinawa. People protested, as people will  do. And in 1973, two years after banning the use of deadly defoliants in Vietnam, the U.S. military used them against nonviolent protesters on Okinawa.

“Although U.S. veterans are slowly receiving justice,” Mitchell writes, “there has been no such help for Okinawans, and the Japanese government has done nothing to help them. During the Vietnam War, fifty thousand Okinawans worked on the bases, but they have not been surveyed for health problems, nor have the farmers of Iejima or the residents living near Camp Schwab, MCAS Futenma, or the soccer field dump site.”

The U.S. military has been busy developing into the planet’s top polluter. It litters the globe, including the United States, with dioxin, depleted uranium, napalm, cluster bombs, nuclear waste, nuclear weapons, and unexploded ordnance. Its bases generally claim the right to operate outside the rule of law. Its live-fire (war rehearsal) sites poison surrounding areas with deadly water runoff. Between 1972 and 2016, Camps Hansen and Schwab on Okinawa also caused almost 600 forest fires. Then there’s dumping fuel over neighborhoods, crashing planes into buildings, and all variety of such SNAFUs.

And then there’s firefighting foam and the forever chemicals often referred to as PFAS, and written about extensively by Pat Elder here. The U.S. military has poisoned much of the ground water in Okinawa with apparent impunity, despite knowing about the dangers since 1992 or earlier.

Okinawa is not unique. The United States has bases in countries around the Pacific and in 16 colonies where people hold second-class status — places like Guam. It also has hugely destructive bases in places that have been made into states, like Hawaii and Alaska.

I urge you to read and sign this petition:
To the Governor of the State of Hawai’i & Director of Lands and Natural Resources
Do Not Extend $1 Lease on 23,000 acres of Hawai’i State Lands in Military Pōhakuloa Training Area!