Trial of the Chicago 7 Review 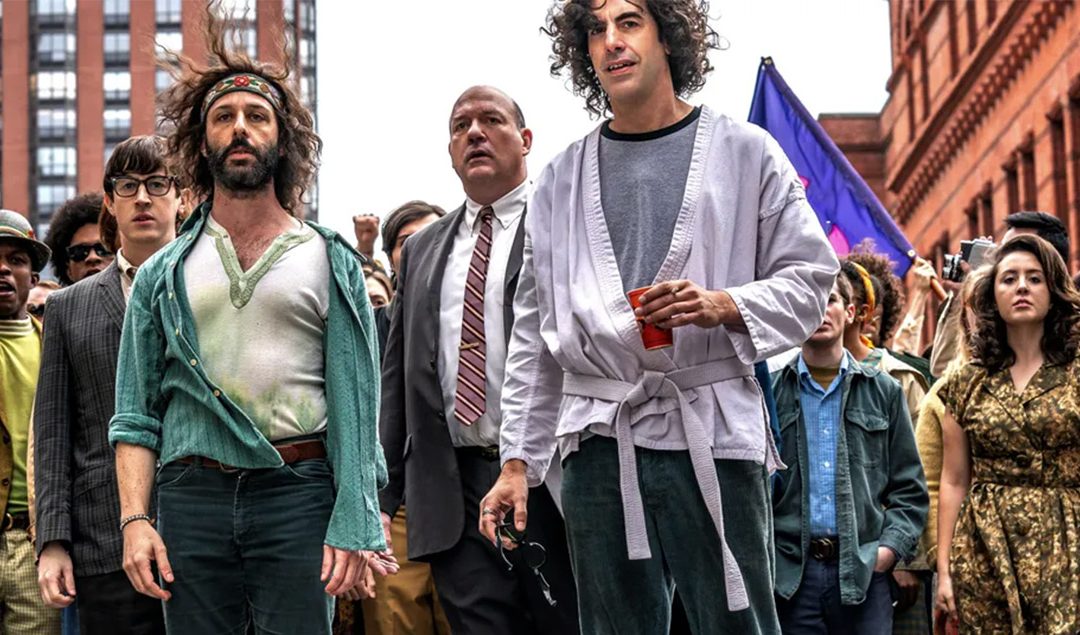 I think Sorkin is committing the crime of stealing our history. As a friend says, there’s such a think as artistic license, but Sorkin’s license should be revoked.

by Paul Glusman, member of the CUNY teacher’s union

I was a journalist at the Chicago 8 (later 7) trial, reporting for Ramparts Magazine. I was there, day by day, in the courtroom and in the defense offices, for practically all of it. I was 22 years old, but the memories of that trial are indelible. This weekend I decided to watch the Aaron Sorkin movie, “The Trial of the Chicago 7” when it was available to stream from Netflix.

There was some good acting in the movie. Sasha Baron Cohen did a reasonably good rendition of the late Abbie Hoffman. Mark Rylance, although he didn’t nail the late William Kunstler, did a decent job. There was some witty dialogue at times. But that’s about all I have to say positive about the movie.

When someone “does” a historical event, it isn’t expected that it be accurate to every detail. It is historical drama, after all, not history itself. I didn’t expect a treatment that used verbatim dialogue from the trial transcript in every court exchange. But even though the trial was 51 years ago there are those of us who still remember it. Me, for instance. I haven’t reached out to Bobby Seale, Rennie Davis, John Froines, or Lee Weiner who are the defendants that are still alive. Most of the other principals in the trial have passed on. But when something happened within the memory of humans who lived through it, it seems to be a bad idea to mischaracterize what those people lived though so completely as Sorkin did.

There’s so much wrong, I can only give examples.

The courtroom itself was a brutal federal mid-century modern edifice designed by Ludwig Mies van der Rohe. It was almost a character in the original trial. Judge Hoffman constantly reminded the defense lawyers that they had to stand behind the lectern, which was where Mies van der Rohe, had placed it when addressing the court or witnesses. The judge said he had been a friend of Mies van der Rohe. He was proud of the spartan authoritarian image that the courtroom projected. It admitted no natural light. Abbie Hoffman called it a “neon oven.” The entirety of the building and the courtroom seemed to serve the purpose of illustrating the futility of human beings contesting the federal government, or the “United States of America” as the prosecution was and is termed in federal criminal trials.

Not in the movie. In the movie the trial was held in an old fashioned courtroom, like maybe Miracle on 34th Street. There were floor-to-ceiling windows. Lots of natural light. Not a big deal, but it took something away from the power image that the feds were projecting against the defendants.

There’s a bit of dialogue in the movie where Seale points out that Tom Hayden was rebelling against his own father, rather than the government. I wasn’t there for every exchange between Seale and Hayden, but I highly doubt that happened. Whatever you think of Hayden, he was a dedicated radical and a leftist. By the time of the trial he not only had co-written the SDS founding document the Port Huron Statement, but had been a community organizer for a decade in places like Newark. And Seale respected (and still respects) the white radical counterparts in the movement. But it makes a nice liberal moment for Sorkin to point out the difference in what’s at stake between Hayden and Seale.

The movie shows Seale denouncing to the court the murder of Fred Hampton. Nice touch. But Hampton was murdered – or lynched – by the Chicago Police Department on December 4, 1969. Seale’s case was mistried on October 29. So, Seale was not in the trial at that point. Seale is also shown accusing white radicals of being racist by calling the trial the “Chicago 7” trial when he was still a defendant. But that never happened. Nobody called it the Chicago 7 until after Seale was mistried. The remaining defendants insisted on still calling themselves the Chicago 8. Sorkin once again is accusing the white radicals of something they never did. They never threw Seale under the bus.

Sorkin does show Seale repeatedly protesting his denial of counsel because Judge Hoffman refused to grant a 6 week continuance so that Seale’s lawyer, Charles Garry, could recover from gall bladder surgery. That’s accurate so far. But Seale grounded this in the history of slavery and the oppression of Black people in the United States. He called out Judge Hoffman for having pictures of slave-owning presidents, like Washington and Jefferson hanging on the wall behind the bench. Those pictures were missing from the movie. Seale also quoted from the Dred Scott decision, which held that Black people have no rights that White people are bound to respect, and accused Hoffman, and the federal government, of acting on that. Seale was absolutely accurate in this. Sorkin omitted that.

Possibly the most ridiculous part of the movie shows Jerry Rubin in tears because a Chicago Police Department plant had come on to him, he fell hard for her, and was devastated not only that she would do something like that, but that the government would train her to do that. This was absolutely false. A female undercover cop followed him around, but he never got involved with her. He wasn’t a 16 year old child jilted by his first crush. He was near 30 and his long-time girlfriend, Nancy, was with him practically every step of the way. But Sorkin, having infantilized Hayden by attributing his radicalism to his resentment of his father, infantilized Rubin also. Sorkin also omitted the part that women played in supporting the defense. (At one point a woman in the office is called “Bernadine” supposedly referring to Bernadine Dorhn, who in reality didn’t work in the office.)

Sorkin also portrays Hayden on insisting on respect for the court. Not really. Every day Hayden would arrive in court before the session started and ask the bailiff if the judge was still alive. Let’s not forget Rennie Davis. Davis insisted on being respectful, according to Sorkin, because his fiance’s parents would be upset if he weren’t and would interfere with their relationship. This was a big deal because he was living with them. He wasn’t. I remember the couple having their own apartment.

There are other missteps. Sorkin completely omits Abbie’s confrontation with Mayor Daley. Abbie came in one morning and found Daley sitting in the witness stand before trial began. He walked up to Daley, put up his fists in a mock-fighting pose, and told Daley that this whole thing could be settled right away, one on one, man-to-man. As I recall even Daley cracked up. Sorkin glosses over Lenny Weinglass’s work. He was the most effective lawyer in the trial, a more than adequate counterpart to Kunstler’s sometime grandstanding. Judge Hoffman never could get Weinglass’s name straight, calling him Weinstein, and Weinreb. Even in sentencing him for contempt, the judge misstated his name. Weinglass calmly said that regarding the subject of respect, he had hoped, after five months in trial, the judge would have learned his name. This was powerful. Sorkin left it out.

The part about Hayden giving the speech for all the defendants at sentencing was made up and atrocious. Sorkin simply had Hayden read the names of the U.S. soldiers killed in the war, as if that was what this was all the protest was about. It wasn’t. The protests were more about what the United States was doing in Vietnam, to the people of that country. The U.S. soldiers counted, but they were NOT the main thrust of the demonstrations, or the trial. Rennie Davis testified in trial about what was happening in Vietnam, and why the war was illegal and unconscionable. It was powerful testimony. Sorkin left that out. Hayden at no point read off the names of U.S. soldiers killed in the war. The trial was not a Vietnam War Veterans memorial before its installation in DC. And for Sorkin to twist that is unconscionable.

Watch the movie if you want, but understand that although it uses real names, it doesn’t depict real people or their motives in opposing the government at that time.