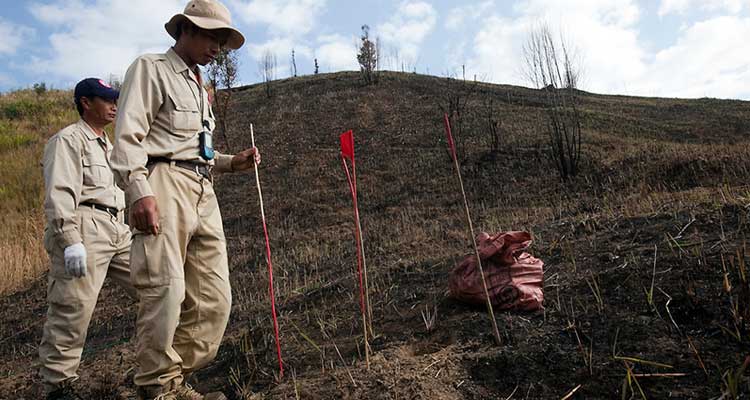 For seven years working for MAG in Quang Binh as a Community Liaison Officer, I have heard about so many accidents in the poor villages: two 14-year-old boys, one killed and one badly injured when they set off a cluster submunition in the schoolyard; a man who is still suffering from the ball bearings pinned in his body as a result of an explosion; three children, one killed and two injured when searching for scrap metal to sell in order to help their poor parents.

A bright future was ahead of them. But the legacy of the war that ended 40 years ago has taken their lives away.

On each occasion, I could feel how terrible the accidents were through my conversations with the victims or their families.

Yesterday there was another.

It was a hot summer day and our teams were collecting information about the location of unexploded ordnance in Dong Giang village, Hung Trach Commune, when we received news that two brothers – aged five and nine – had been killed 2km away.

They had been tampering with a BLU-3 cluster submunition, left over from the Vietnam-American War, in front of their home.

We went there immediately. The rundown house was surrounded by hundreds of people.

I couldn’t tell who the mother of the two children was among the many crying women there, but someone pointed out the father, himself still bearing the pain from a recent traffic accident.

He couldn’t move, and was on his knees screaming: “Today is my sons’ first day of summer holiday. Why didn’t God let me die instead of my sons, why did he take my sons away? They were still so young.” I couldn’t stop the tears streaming down on my face. My heart really hurt.

I saw the pliers and a pair of broken sunglasses that the children had used to tamper with the submunition, in an attempt to get scrap metal to sell for cash. I saw a pair of torn sandals, a hole on the floor and the ball bearings from the submuntion.

The tools used by the children to tamper with the bomb: pliers and a pair of broken sunglasses.

I walked closer to the bed in the centre of the house. Someone pulled the blanket up, revealing two dead bodies. Legs and hands were smashed and blown away.

What a terrifying scene. I closed my eyes, feeling breathless and ran out. People were crying louder and louder.

Why did these innocent kids have to die? The older brother was a good pupil at school. He was just nine years old, but always tried to help his parents. Every day he walked far to bring back some clean water for the family, and he took care of his five-year-old brother while their parents were out.

A bright future was ahead of them. But the legacy of the war that ended 40 years ago has taken their lives away.

I informed a victim assistance organisation of the accident, so they could provide support to the family. I left MAG’s telephone hotline number there in case they needed help. This village was on our current priority list for clearance next month.

I suddenly thought of my three-year-old son. This should never happen again. I have to do something. I will start teaching my son his first Risk Education lesson today.