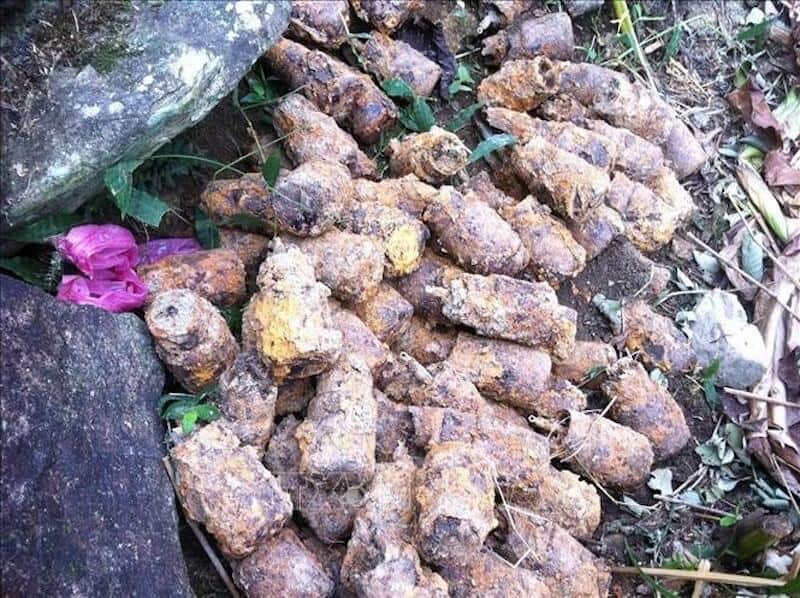 HÀ GIANG — Residents of Thanh Thuỷ Commune in Vị Xuyên District said they are still occasionally startled by an explosion somewhere in the mountains nearby, a cruel reminder of a bloody border war 40 years ago.

They first prayed that no one gets hurt by stepping on the unexploded ordnance (UXO) buried in the terrain throughout the north-eastern uplands, especially the northernmost province of Hà Giang, where the bloodiest battles were waged.

Having lost both of his legs in two separate incidents related to unexploded bombs, Hòn uses his arms to move around

The changeable weather at this time of the year causes him major aches all over and he could no longer rely on crutches.

For the last 20 years, from being the main breadwinner of the family, now he can’t help sometimes feeling like a burden.

In 2002, when an explosive took out one of his legs, Hòn was determined to not let this disability get in the way. Borrowing an unused prosthetic leg from a friend, Hoà tried to practise until he could walk up the mountains unassisted.

As farming was no longer an option, Hòn chose to raise a herd of goats in the hope that the additional income would help alleviate the pressure on his sickly wife.

“Many times, I tried to clamber over some high rocks but my legs meant I couldn’t balance and I tripped over. Bleeding and bruised all over, it took me quite some time before I could walk again,” he said.

But in a cruel twist of fate, while herding his goats, he tripped on another unexploded mine and this time it deprived him of the remaining healthy leg. He luckily survived, but he could no longer climb the mountains while the explosion dealt irrecoverable trauma to his head and chest.

He mostly stayed at home and became anxious every time his children went to work on the fields.

“Only in the evening, when they arrived home, did my worries subside,” Hòn said, pointing towards the hills facing his house.

This was not just an exaggerated concerns of an idle man: in his family alone, there are four victims of UXO.

His wife’s brother was found shredded to pieces a decade ago, while her sister and Hòn’s son-in-law lost their legs.

“This land here, the land of our ancestors, their graves are still here, how could we just get up and leave. I only wish the authorities would clear up all the ordnance and return life-giving greenery to Nậm Ngặt, so our offspring can live and work with peace of mind,” he said.

Nậm Ngặt stands detached from the outside world as the dirt tracks there haven’t seen upgrades since they were first formed.

Having notorious Hill 685, frequently called ‘the lime kiln of the century’ or the ‘hill of ground meat’, millions of rockets or mines from the Chinese troops were launched in this direction, causing destruction so great to the Nậm Ngặt area that only very recently did the former lush green growth began to sprout again on the bomb-ravaged hills. But make no mistake, these innocent looking hills and mountains still harbour a significant amount of deadly wartime ordnance deep within rock crevices, at the turn of a freshwater stream, or under the forest floor teeming with life.

Tráng Văn Toàn, born after the war ended, said many fertile land zones were cordoned off and entries are categorically forbidden by Vietnamese soldiers as they are infested with UXO.

Nậm Ngặt households dared only to farm at the foot of the mountains, but they are still not free from fear.

“After heavy rains and flooding, the soil up there barrels downhill, bringing with it who knows how many unexploded bombs and mines, it’s so dangerous,” Toàn told Vietnam News Agency.

Not just Hòn and Dũng, but 45 victims of UXO in Thanh Thuỷ District are all from poor backgrounds, and the accidents didn’t do them any favours.

Even more surprising, the injuries and deaths were not just a matter of random incidence, but sometimes an “occupational hazard” for so-called junk collectors.

In this remote region, gathering the broken rocket shells or leftover military metal used to be a serious job, as it could cost one’s life.

Nguyễn Văn Hường, born in 1981, is by far the most recent victim of UXO in Vị Xuyên. He used to trade the metal junk for rice and a little income.

“There used to be so many empty shells littered on the mountain sides. A hardworking person could earn VNĐ60-70,000 (US$2.6-3) a day, enough to feed a family of four for two days,” Hường said.

The empty shells eventually ran out. Hường and colleagues decided to buy cheap metal detectors to dig out the UXO in the ground, mostly by hand.

All members of the “scrap metal legion” in Phương Tiến Commune of Thanh Thuỷ suffered injuries – some died, some lost their legs or hands, or went blind – from these daring ventures, but no one gave up, because they had nothing else as a viable livelihood.

“At first I was really scared, seeing someone die on one of these scavenging trips, but I got used to it,” Hường said.

In March 2017, the dangers finally caught up to him. The explosion cost him a leg, an arm and both of his eyes, rendering him an invalid and the entire family’s livelihood now dependent on Hường’s wife.

Not as reckless as Hường and his cohort, Nguyễn Đức Dân in Nậm Ngặt village was more of a pro. Dân had served in the military and had fought in the border war, he knew guns and could tell many kinds of ordnance apart. This expertise allowed him to confidently deactivate the dangerous ordnance.

One time, when Dân participated in a team that was tasked with digging irrigation channels, another man discovered a small green grenade and handed it to him to identify.

As he was telling others how deadly this 652A leaf-green round mine was and how much trouble it used to cause to the Vietnamese side, it exploded in his hand, taking away the limb and most of his eyesight.

Many villagers noticed the twisted irony that Dân didn’t suffer serious injuries during the intense battles but became severely disabled in peacetime.

The border guards, the youth’s union and the women’s union have worked to inform people of the dangers, telling locals to stay away from the cordoned zone, especially ones designated as dangerous by the military, but due to economic hardship, “many still gamble with death only for these unfortunate incidents to occur,” Phan Văn Hạc, chairman of Phương Tiến Commune People’s Committte, said.

Triệu Tài Vinh, Secretary of the Hà Giang Province Party Committee, said the province recorded 395 incidents, with more than half of them, 230 people, dead. People living near the border, especially in the former battlefields of Vị Xuyên, Quản Bạ and Hoàng Su Phì, are still at elevated risk.

The number of UXO victims in Hà Giang has been on a sharp decline in recent times, not so much as more areas are being cleared of UXO but rather since people’s awareness has improved.

The authorities are also pursuing economic initiatives aimed at providing livelihood options and raising quality of life in remote, minority ethnic areas in Hà Giang, which are expected to tackle the issue at its roots, Vinh said, citing several efforts like the resettlement programme codenamed 120, and providing seedlings or calves as well as teaching farming techniques.

Vinh said the UXO-polluted area in Hà Giang covers 85,000ha, of which, 34,000ha is in Vị Xuyên District, but the sheer amount of work to decontaminate a parcel of land is tremendous.

From 1988, despite their best efforts, but being constantly underfunded and understaffed, the cleanup operation by the Hà Giang military command has only managed to clean up 5,000ha, with priorities set on arable land for people to carry out agricultural work safely.

From February 1 this year, the Vietnamese Government has issued a decree which will grant better benefits to UXO victims, including primary care, rehabilitation programmes and training courses, as well as resettlement and livelihood support. The children of victims from poor households could be entitled to tuition fee waivers and further aid, in an effort to ease the suffering and difficulties in the lives of these people. — VNS 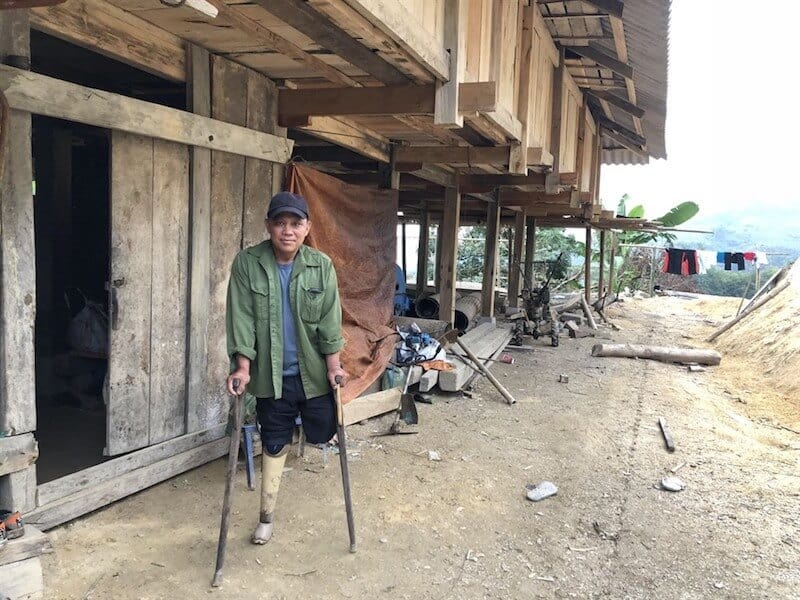