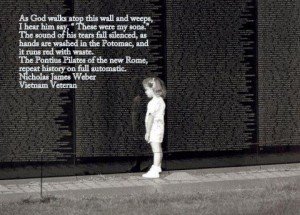 Memorial Day Event/Letters to the Wall photos by Ellen Davidson

Dear all: Right now I have 148 letters neatly placed into envelopes with our Full Disclosure logo attached as a sort of stamp. Each envelope has a typed message — TO THOSE WHOSE NAMES ARE ON THE WALL– and a handwritten note — Please Read Me. Each envelope has the letter writer’s last name inscribed as a “return address.” If a letter referred to an individual killed in the war, I put the Panel and line number on the outside of the envelope so that we could place the envelope in the appropriate location. Only one person requested that his letter be sealed, so all the rest are open for visitors to The Wall to read. And what an amazing collection of heartfelt messages are awaiting them.
We have letters from veterans who were in Vietnam; we have letters from soldiers who resisted going to Vietnam; we have letters from children of veterans; we have letters from American citizens who joined the anti-war movement and fought for peace here in the homeland; we have letters from some very angry people; and we have letters from people who are still so overwhelmed from grief that they could barely write a paragraph. In a word, we have accomplished what we set out to do — we have brought people together under a common cause — to commemorate the devastating loss suffered by so many during this immoral war. I honestly feel that  all of the letter writers are “Vietnam veterans.” And I think that is exactly what the powers that be do not want us to acknowledge.
The myth that is shattered by this humble exercise in community sharing is that those who fought in the war are permanently estranged from those who fought against it.  In these letters are words written by people who sacrificed a great deal either as soldiers or as peace activists. Almost every letter expressed grief — medic letter writers grieve over the lives that were lost in their hands; peace activists grieve because (and this is a constant refrain) they feel they did not do enough to end the war. We are all bound by a deep sense of humanity, of empathy, of compassion that most political pundits seem to lack. We are a family.
I will be joined by at least fifteen other Veterans For Peace members at 10:30am on Memorial Day. We will gather at each end of The Wall and proceed down to its center, placing letters along the way. When this phase is complete, those of us who were in Vietnam as soldiers will “walk The Wall” — we will start at the panel commemorating the deaths of those American soldiers who died the day we arrived in country and proceed to the panel commemorating the deaths of soldiers on the day we left Vietnam. For me, that will be a walk of about 25 paces, a walk by the names of about 9800 soldiers.
After this phase of the commemoration, we will proceed to Roger Ehrlich’s Bell Tower, which is about 200 yards from The Wall. His “From Swords to Plough Shares” working sculpture invites people into a space to write their thoughts about war on plaques that are then placed onto the sculpture. A bell can be rung for every plaque written.
We will gather at the Bell Tower to reflect on the letters we have just placed at The Wall. Those of us who choose to will then take a silent walk around the Reflecting Pool to commemorate the lives of Southeast Asians who have lost their lives during the American War in Vietnam. At various times during the day, passages from the letters will be read aloud.
I would like to thank those who worked so hard to make this day happen — first and foremost Julie, who kept all of these letters together (and who wrote a beautiful, powerful letter herself); and Howie and John and Chris from the North Carolina chapter who helped us keep the faith in this project; the VFP board members and National Office staff who contributed their time and encouragement. We will try to do you proud.
All the best, Doug Rawlings

We in Veterans For Peace (VFP) invite you to join us as we put together a special Memorial Day 2015 service. As many of you know, the year 2015 marks the fiftieth anniversary of what some consider to be the beginning of the American War in Vietnam– the deployment of the U.S. Marines to DaNang. The Department of Defense is very aware of the significance of this year and has mounted a heavily funded initiative to make sure that the younger generations of this country see the Vietnam War as a noble enterprise. Included in their efforts is a well-funded website as well as plans for annual celebrations, such as Memorial Day events around the country. They are planning to tell their version of the war for the next ten years.

However, we know that many of us disagree with their perspective, who see the war as, at the least, a grievous mistake if not an horrific crime. As we have already seen, the Pentagon will downplay or ignore this perspective in their narrative of the war. Thus, we in VFP have pledged to meet their campaign with one of our own — we call it the Vietnam War Full Disclosure movement (https://www.vietnamfulldisclosure.org). Please join us in more fully opening up the dialogue of how the history of the American War in Vietnam has to be told. We need to hear your voice. To begin with, we need you to write a letter. A special letter. (Please read some letters received already here.)

We are calling on concerned citizens who have been seared by this war to each send a letter addressing the Vietnam Veterans Memorial (The Wall) in Washington, DC directly. We are asking you to share your memories of this war and its impact on your loved ones while expressing your concerns over future wars. Direct your words to those who died in the American War on Vietnam.

Our plans are to then gather boxes and boxes of letters from people like you who do not share the sanitized version of the Vietnam War advocated by the Pentagon. In order to bring as many of your voices into this dialogue, please send us your letter and then please send this request to ten of your friends and ask them to write their letters. And then ask them to send the request to ten of their friends. And ten more.

At 10:30am on Memorial Day, May 25, 2015, we will place these letters at the foot of the Wall in Washington, DC as a form of remembrance. As a Vietnam War veteran myself, I share with many the belief that the Wall is no place for political events. I consider it to be sacred ground and will not dishonor this memorial with a political act. The placing of our letters at the Wall will be treated as a service, a commemoration of the terrible toll that war took on American and Southeast Asian families. And as a trumpet call for peace.

Once the letters have been placed, those of us who served in Vietnam will “walk the Wall,” i.e., we will continue to mourn our brothers and sisters by starting at the panel commemorating our arrival in Vietnam and finishing at the panel marking our departure from Vietnam. For me that involves a walk of about 25 paces, taking into account approximately 9800 American lives. But we will not stop there.

We will continue walking beyond the confines of the Wall to memorialize the approximately six million Southeast Asian lives lost during that war. This will be a symbolic act, for if we were to walk the total distance needed to commemorate those lives lost, using the model of the Wall, we would need to pace 9.6 miles, a walk equivalent to the distance from the Lincoln Memorial to Chevy Chase, Maryland. Nevertheless, we will carry the memory of those lives as best we can.

If you wish to submit a letter that will be delivered to the Wall on Memorial Day, please send it to vncom50@gmail.com (with the subject line: Memorial Day 2015) or by snail mail to Attn: Full Disclosure, Veterans For Peace, 409 Ferguson Rd., Chapel Hill, NC 27516 by May 1, 2015. Email letters will be printed out and placed in envelopes. Unless you indicate that you want your letter shared with the public, the contents of your letter will remain confidential and will not be used for any purpose other than placement at the Wall. If you do want us to offer your letter as a form of public witness, we will share it with others by posting it on a special section of our website. A select few may be read at the Wall on Memorial Day.

If you wish to physically join us on May 25th, please let us know beforehand by contacting us at the above addresses. Please stay in touch with us by visiting https://www.vietnamfulldisclosure.org/. And if you wish to make a donation to help us defray the costs of our action, feel free to do so by sending a check to the Vietnam Full Disclosure committee at Full Disclosure, Veterans For Peace, 409 Ferguson Rd., Chapel Hill, NC 27516.

Since I will be coordinating this effort on behalf of Veterans For Peace, I will be happy to hear your suggestions on how we can make this event a more meaningful statement about the American War in Vietnam. You may reach me at rawlings@maine.edu.

Thank you in advance for writing your letter. For joining in on the dialogue. For working for peace.