US Almost Blew Up A Nuclear Plant in Vietnam 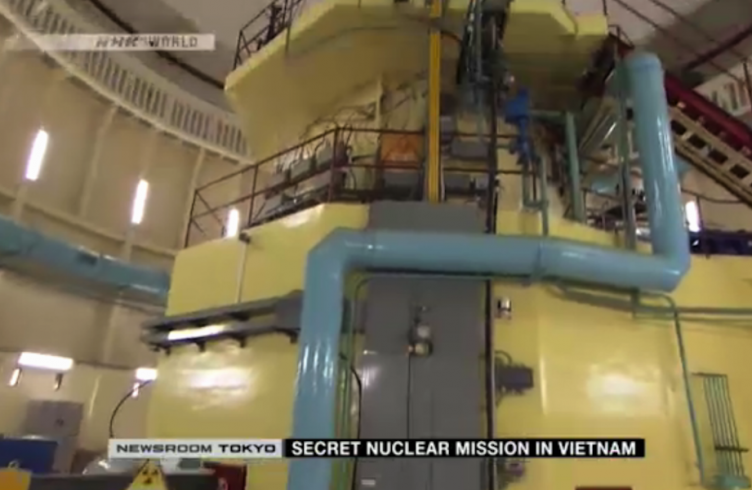 EXPOSED: US had plans to nuke Vietnam near end of war! By Clay Claiborne.

Thanks to the investigative reporting of the NHK Newsroom Toyko, it has recently come to light that not only did the United States operate a secret experimental nuclear reactor in South Vietnam during the war, but that then Secretary of State Henry Kissinger ordered that the radioactive core be blown up as a last-ditch measure to stop it from falling to the communist advance. While this would not have caused a nuclear explosion like an atomic bomb, it would have been the equivalent of dropping a dirty bomb on South Vietnam. It would have likely killed thousands and made the resort and university town of Da Lat as well as the surrounding rich countryside unusable for generations.

Think Fukushima, done on purpose, to an Asian people by a fleeing imperialist power.

In 1963, the United States started operating a small Triga-Mark II reactor built by General Atomics in South Vietnam as part of the US Atoms for Peace program. The Da Lat Nuclear Research Institute did its work in secret but by the end of the war, in March 1975, it was using fuel rods of the most advanced US design, much more advanced than anything the Soviet Union, its nuclear rival, had at the time, and the US was willing to go to very extreme measures to keep them from being captured by the rapidly advancing North Vietnamese Army.

It was so important that Secretary of State Henry Kissinger got involved. With the communist advance within days of liberating Da Lat, on 24 March 1975, Kissinger sent a secret telegram to the US Embassy in Saigon. In it he ordered that the fuel rods be removed and flown out, and that if there was no time for that, and if the core couldn’t be buried under enough concrete, then the nuclear core, together with the fuel rods, was to be blown up. The concrete cover was not a realistic possibility at the time, according to Wally Hendrikson, who was then a nuclear fuel specialist at the Idaho National Laboratory and a member of the team sent in to carry our Kissinger’s orders. In its report, he tells NHK World his understanding of his orders, if they couldn’t get the fuel rods out in time:

“We were to dynamite the core.”

“I actually did some calculations on how much TNT it would take, and so on.”

That it didn’t come to that was due to the heroic efforts of a team of four men, including Wally Hendrikson, and John Horan, a fellow scientist. It is the log book maintained by Horan that detailed events from their landing at Cam Ly Airport on the morning of 30 March, when they were told by Ambassador Graham Martin:

“Blow up the reactor.”

Until their plane took off with the fuel rods safely aboard on the morning of 31 March, just two days before Da Lat was finally liberated from those ready to visit the region with long lasting death and destruction. The scientists accomplished this feat by disregarding all normal safety procedures and working through the night. They were up against a hard deadline because if they couldn’t get the fuel rods out in time to make the scheduled transport flight the next day, the core was to be blown up. In the words of Wally Hendrikson,

“The town was a tourist town. A university was there. It was a great agricultural area. And you don’t do that sort of thing under normal conditions — you don’t think of that. I can’t justify that. I think it would have been a war crime.”

So to avoid any part in another Kissinger war crime, the team exposed themselves to the nuclear risk, worked in shifts, each of the four taking turns, removing the fuel rods by hand, while the other three sheltered behind a makeshift radiation wall, because the normal procedure that uses robots and cranes would have taken too long. They are the unsung heroes of this once secret tale of how the US planned to nuke Vietnam as it was fleeing the country.

They could have dynamited the core, as they were told to do, and been safely away, but the explosion would have spread the nuclear material far and wide. This would have created a nuclear disaster of monumental proportions and been a war crime. This was in a South Vietnamese university and resort town that had largely been spared the war’s ravages, which is probably why the US chose it as the site for the reactor, not a so-called enemy area, and yet the US considered it an option to murder its inhabitants to protect its secrets.

After the war, the reactor was reload with fuel rods from the Soviet Union and restarted. Today it is the only research nuclear reactor in Vietnam and has been operating safely for more than 30 years.

That was the 3rd time the US threatened to nuke Vietnam.

While Kissinger’s orders to blow up the Da Lat reactor, if carried out, would have been like a dirty bomb, with the surrounding people and area“collateral damage” to a criminal hazardous waste disposal program, there are at least two documented occasions in which US government officials did advocate the use of real nuclear weapons to put down the liberation movement in Vietnam.

The first was in the 1950’s when the French were fighting to get back its colony, and losing. On 22 April 1954, just two weeks before the French were to suffer their historic defeat at Dien Bien Phu, US Secretary of State John Foster Dulles asked the French Foreign Minister Georges Bidault, at a meeting in Paris:

It was a serious offer of two tactical nuclear weapons to be used against the Vietnamese. The French showed great wisdom in declining. According to Professor Fred Logevall of Cornell University, Dulles

“at least talked in very general terms about the possibility, what did the French think about potentially using two or three tactical nuclear weapons against these enemy positions.” [at Dien Bien Phu]

At the time, the US was still hubristic from its nuclear devastation of Japan and whether it was “Atoms for Peace” or “Atoms for War,” the nuclear genie was expected to deliver great blessings to the United States and the American Century to the world. Never mind the devastation left in its wake.

As Vice-President, Richard Nixon was one of the biggest hawks on Vietnam around that time. He was far more hawkish than President Eisenhower and almost certainty played a role in the Dulles offer. As President, he would threaten to ‘go nuclear’ over Vietnam a second time.

Nixon: “I’d rather use the nuclear bomb.”
Kissinger: “That, I think, would just be too much.”
Nixon: “The nuclear bomb. Does that bother you?”
Kissinger: (bad mumbling audio)
Nixon: “I just want you to think big, for Christ’s sake.”

This careless banter culminated in the execution of a secret “JCS Readiness Test”—the equivalent of a worldwide nuclear alert in October 1969. According to the National Security Archives:

[I]t involved military operations around the world, the continental United States, Western Europe, the Middle East, the Atlantic, Pacific, and the Sea of Japan. The operations included strategic bombers, tactical air, and a variety of naval operations, from movements of aircraft carriers and ballistic missile submarines to the shadowing of Soviet merchant ships heading toward Haiphong.

Nixon called it his “Madman” strategy, designed to make the North Vietnamese and their Soviet supporters think that Nixon just may be crazy enough to nuke Vietnam. Given that the US was to slaughter millions of Vietnamese with conventional weapons and Nixon had drastically increased the bombing, neither they nor anyone else could be sure that Nixon was just bluffing.

This information on Nixon’s 1969 nuclear alert is new and it has yet to receive much exposure in the media. The Da Lat story that was broken by NHK Tokyo Newsroom a week ago is a very important story. It shows us, once again, the callus disregard for human life that characterised the US conduct of the war against Vietnam. It has received no publicity. None! Google “Wally Hendrikson, and John Horan” for the past month and you will get one relevant hit: Vietnam War Nuclear Mission – NEWSROOM TOKYO – TV. Once this blog post is published, you’ll find two. That’s how well you are served by the American Media!

For more on the US War see my Vietnam:American Holocaust