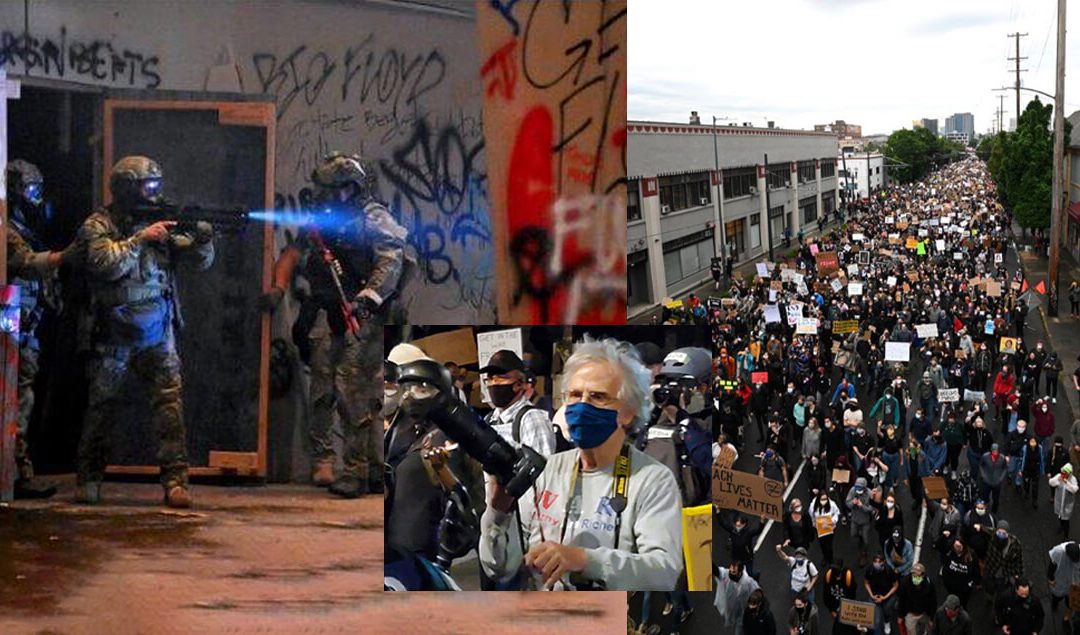 Herds of rhinoceroses rushing at top speed through the streets became a sight that no longer surprised anybody. People would stand aside to let them pass and then resume their stroll, or attend to their business, as if nothing had happened.

Few can hold a candle to Vietnam veteran medic Mike Hastie’s commitment to speaking Truth to Power about the Vietnam War and a host of other “crimes” the US Military has undertaken in the name of the American people. Mike was recently featured in a video in which he was shot in the eyes with a non-lethal pepper spray slime for speaking his truth non-violently to a phalanx of camouflaged, de-humanized, up-armored federal police in Portland, Oregon.

Hastie was specifically speaking his truth about the Vietnam War, a war he participated in many years ago before these up-armored young federal agents were even born. These obedient young state operatives are symbols of federal power assigned to “trump” local power for the purpose of intimidating First-Amendment protected protesters like Mike Hastie from expressing their truths. Naturally, they employ the very latest non-lethal tools of control.

While intense street confrontations like the one in Portland were inspired by the police murder of George Floyd, that spark set off a movement that quickly spread to involve a host of deeply exasperating issues that have plagued many Americans for a long time. For Vietnam veterans like Hastie, the Vietnam War is one of those issues. The same goes for young Americans fed up with the business-as-usual litany of unaddressed problems that threaten to foreclose their futures and turn them into nightmares. Much of this dissatisfaction is glibly reduced by the comfortable who have achieved their American dream to charges of “radicalism”, thereby making protester complaints easily dismissable and ignorable. And any examples of excessive anger by frustrated protesters easily damnable. Systematic racism, brutal policing and imperial militarism tend to get all mixed up in this volatile stew. To me, the assault on Mike Hastie is a small, telling set-piece in this drama. 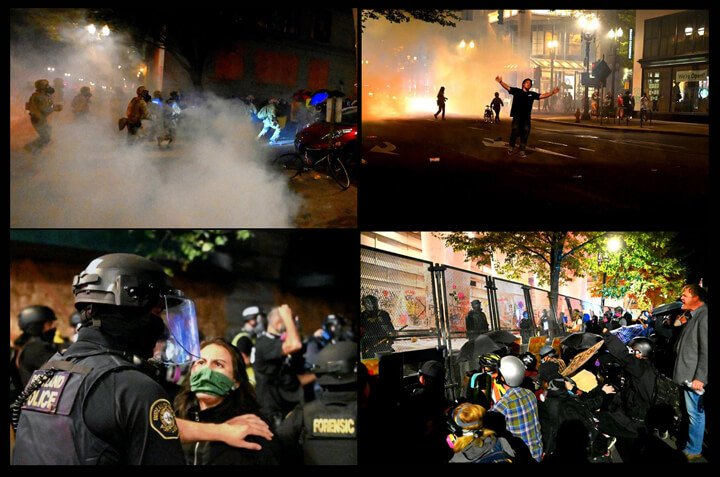 Image above: Four of Hastie’s many images from the Battle Of Portland.

The country still hasn’t reached any kind of consensus on the meaning of its bloody and costly adventure in Vietnam from 1945 to 1975. It just lives there dead-center in the post-WWII American story. Our aircraft carriers are now making port calls in Da Nang, and we’re allied with the Vietnamese vis-à-vis the Chinese. Some of us wonder why so-called great leaders like Harry Truman never considered this in 1945 when the US chose to support French re-colonization, despite the fact during WWII French forces had capitulated to the Japanese and the Viet Minh guerrillas had been our ally against the Japanese. I regularly ask people, but they can never tell me what exactly the Vietnamese ever did to us in the United States that required us to do what we did to them — the horrific things in the video Hastie is trying to tell the young men and women in the fashion accoutrements of 21st century fascism. You can see their brute passivity is making Mike angrier and angrier. In the end, by exhibiting so much anger, Mike is not being perfectly Gandhian; but Gandhi was not always Gandhian either.

This street confrontation writ large in US culture — what I’d call The American Vietnam War Divide — will be with us for the foreseeable future. At least until the last Vietnam vet expires. On one extreme, the Vietnam War is seen as an honorable affair, while on the other extreme, it’s an international crime.

The asymmetrical power confrontation between Hastie and the Homeland Security squad is a cliché of our time. Such a show of rhinoceros-like force never really solves anything; instead, it only circles back and feeds more dissatisfaction, more anger and more confrontation. Look at Belarus right now. In the US, it all began with the movable cattle chutes and “free-speech zones” of police operations following 9/11, all inspired by the so-called Patriot Act, that reactionary legislative construct that few legislators even read. The bottom line is lots of citizen tax money and expensive R&D has gone into discovering brilliant ways and means to restrict angry citizens’ First Amendment rights to speak truth to their government. Short of killing them.

Some years ago, 60 Minutes did a story on non-lethal sound-focusing guns for crowd control. My wife and I watched it, and before long we were both cursing the screen. Tank-mounted emitters were shown blasting sonic rays at volunteer soldiers in civilian clothes walking across a field carrying signs calling for — wha’d’ya know! — WORLD PEACE. These guinea-pig phony peace activists seemed to be having a really good time. The tank operator blasted the heroic 60 Minutes correspondent, and boy did he jump and snigger in awe at the incredible pain the thing caused. Wow! Ha! Ha! That really makes you move outa the way! Welcome to the brave new world of non-lethal crowd control. Not only did the Pentagon get 60 Minutes to promote its nifty new non-lethal weapon, it got them to ridicule the peace movement at the same time. I recall my furious, peace-loving wife making this wry comment: “We’re now supposed to celebrate that we’re not being killed by our government?” Thanks for small favors.

Watch Mike Hastie’s video a few times. Why is this 75-year-old man so willing to take the abuse from these characters who seem to have stepped out of some cheap thriller? He’s a photographer and he’s been non-violently using his Nikons on these streets for six days. Today’s brute governments all hate cameras. It’s always officially denied, but it’s obvious some of the more sadistic individual operatives do, in fact, aim their very expensive non-lethal weapons at the press. Why wouldn’t they? The same ridicule 60 Minutes propagated on prime-time against the peace movement is treated as gospel in the ranks of the police and the military.

As a thought experiment, think of Mike Hastie as a protester in China or Iran or someplace we Americans officially don’t like, and think of the men assaulting him as state police “thugs” from one of those officially hated places. Just hold that image for a few minutes; run it around in your head for a while.

Why would a man expose himself to such discomfort and such danger? Why did that guy stand in front of that tank in Tiannamen Square?  After Hastie is put in such pain why would he continue to pursue these camouflaged automatons with such anger? No doubt, adrenaline is masking the pain. Still, in my reading, he doesn’t exhibit any rancor; his demeanor is more one of incredulity. How can you guys be so inhuman? He doesn’t hate them; he just doesn’t get them. Then you realize these men (and women) must be threatened by Mike. His passion is getting to them, and he’s talking about military experience, something they can relate to. He wants them to understand something. But, then you realize, all they want to do is get the hell away from him. They also know they’re being filmed, so whatever they do, the whole world will be able to see it. So as a fuck-you punctuation for frightening them just a little, some sadistic fellow pushes his way forward and shoots Mike in the face. Then they flee.

What’s going on here? Part of it is brave civil disobedience. Mike isn’t gonna give in to their brute show of force that he knows is meant to intimidate him and make him and everybody else go away. But there’s also something else going on, something much more important, and that is Mike’s insistence on retaining his humanity in the face of brute de-humanization. He’s trying — albeit futilely — to speak to the real, human men and women buried deep inside all that fascistic regalia: Why are you hiding under all that rhinoceros armor? Can’t you see people are protesting here because they’re hurting and they’re fed up with the inhumanity so symbolized by your armor and weapons? Why are you so devoted to death and domination? Where’s the humanity in your hearts?

In Ionesco’s original short story and, later, the famous play, human characters are overtaken slowly and in comic tempo by rough-hided rhinoceroses thundering through their town. One character says, “If you leave them alone, they just ignore you.” That’s what’s always said about tyrants — until they come for you. The protagonist Berenger holds out as everyone he knows succumbs. At the end of the play, he cries out: “I’m not capitulating!”

I’ve known Mike Hastie, especially his witnessing work, for some time. He’s a natural poet who travels the world with two Nikons. He’s an excellent photographer. He has an email list to whom he likes to send an image juxtaposed with a bit of text. Invariably, the combination of text and photo is poignant and meaningful. I always read and look at a Mike Hastie email. He’s an authentic, down-to-earth humble man who I see fitting in with a long line of poets, authors and photographers known for their engagement with the dignity of simple, raw life. There’s also a bit of a flaneur in Mike, a wanderer who finds meaning in random things encountered. A mutual friend called Mike “a non-violent army of one.”