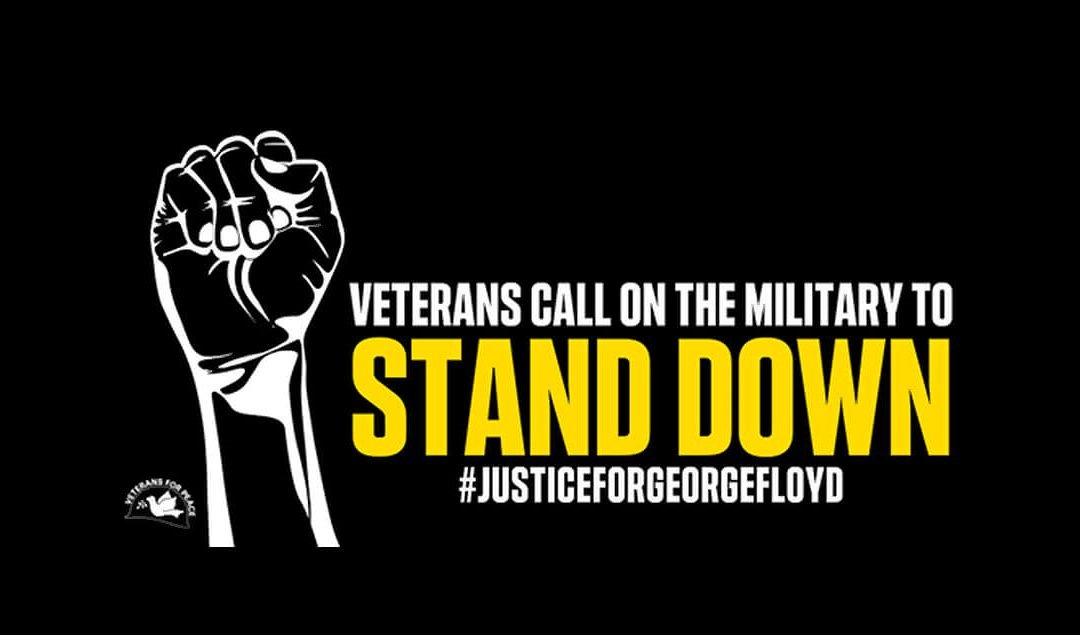 Veterans For Peace condemns the inflammatory statements by Donald Trump. His declaration of calling for military troops on U.S. soil to quell people exercising their first amendment right is inflammatory and incredibly dangerous. We stand unequivocally with the protestors who are in the streets calling for an end to senseless police killings and white supremacy.

In addition to the 200,000 troops already deployed across the world, U.S cities are being occupied by military force. Thousands of heavily armed soldiers, military personnel, and police have been deployed to cities across the nation as Trump calls on the military to “dominate the streets” and that he’d override any local control if governors refuse to deploy the national guard. Threats and intimidation are tactics of terror by this administration. Trump’s statements, as well as past statements, are incendiary and effectively declare war on our communities.

Across the country, tear gas, flash bangs, and other “non-lethal” weapons have been used on peaceful protesters. Reporters have been targeted, arrested and injured. Children have been tear gassed. Elders have been harassed. People have been killed as a result of police and National Guard violence in Louisville and many more hospitalized across the country. These actions should be condemned and most importantly, we must refuse to participate in these unjust actions by speaking out and talking to our friends and families who are currently serving in the military.

Veterans For Peace calls on all military leaders and personnel to refuse deployment. We, as veterans, know the terrible aftermath of participating in actions that are morally wrong against communities in other countries. Now is the time to refuse to participate in orders that are unjust.

Previous statement earlier this week from Veterans For Peace:
Veterans Call on the Minnesota National Guard to Stand Down