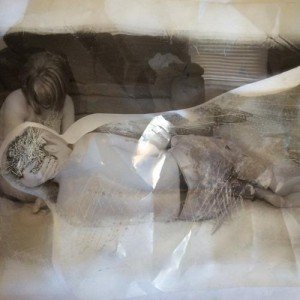 Bio: Trish Brownlee is a mixed media artist, photographer and educator currently working out Portland, OR and Hope Mills, NC. She is a published photographer and exhibiting fine artist. Her process explores traditional media such as papermaking, printmaking and painting integrated with photography, digital tools and technology. Trish is a 2012-2013 recipient of the Regional Artist Grant from the Arts Council of Cumberland County, and attended the 2015 Penland School of Crafts winter residency in papermaking.

Trish is currently in her last 2 weeks of graduate school, and will graduate her Master of Fine Arts in Visual Arts from Pacific Northwest College of Art on August 9th. Her thesis exhibit, “About Face” uses papermaking and photography to explore the home life of the military family. In her current project “Shadow Boxes” she collaborates with veterans and families to share their experiences with society through altered portraits, sounds bites, and interviews.

She earned her Bachelors of Arts in Visual Arts, with a dual concentration in Graphic Arts and Painting from Fayetteville State University in 2012. She served as military photographer and public affairs specialist in various locations for both the Oregon Air National and North Carolina Army National Guard commands from 2004-2011, and in multiple capacities on active duty assignments, guard units, as a contractor in 2008 in Kuwait, and finally as a civilian photographer in a civil service position from 2009-2011. Trish was medically discharged from the National Guard in 2011, and chose to also leave civil service at that time to continue her education in art. She currently teaches visual arts programs during the academic year at a North Carolina charter school.

Bio: Dan Shea Marine Vietnam Veteran 1968 and Agent Orange Survivor
“I” Co, 3dBN, 26th Marines – Quang Tri, Quang Tri Province & Phu Bia, Thua Thien Province Viet Nam
Last Duty Station: Sep Cd. Co MB USNB Subic Bay Philippines
Dan remembers while on a mission in the jungle when his platoon refused to continue a mission after a Sargent was killed by a booby-trap explosion on a jungle trail and other traumatic close call experiences with death. Viet Nam was the war that kept on killing and would extended death’s boney fingers long after war was over and attack his son with birth anomalies related to Dan’s Agent Orange exposure. The United States use of the illegal chemical weapon Agent Orange killed, crippled and caused cancers and other diseases to millions of Vietnamese affecting children now into the 3rd and 4th generation and took Dan’s son Casey at the age of 3 in 1981.
Dan is currently the host of Veterans For Peace Forum, former board of directors of the national Veterans For Peace, is the executive director and co-founder of Education Without Borders and a participating member artist of the Warrior Arts Group