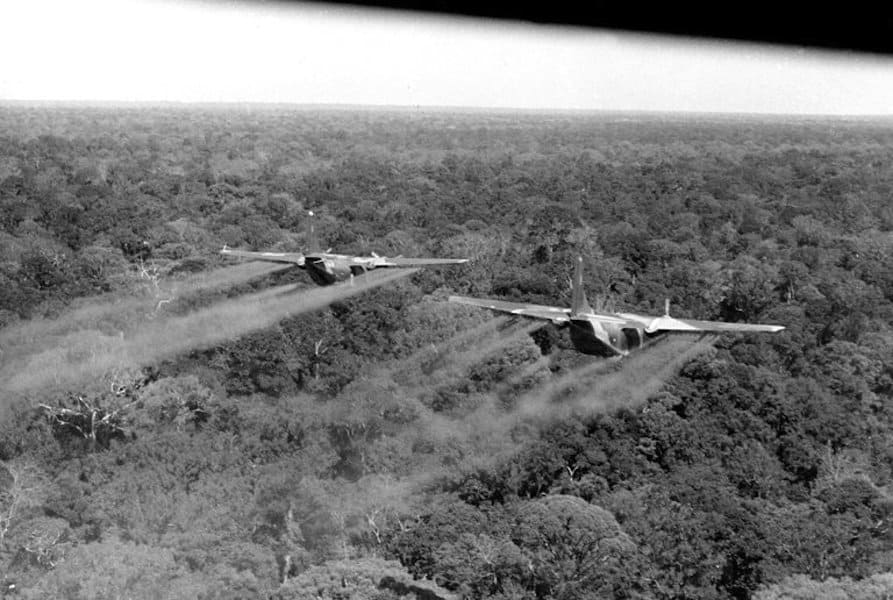 This article originally appeared at thenewyorktimes.com.

Just before dawn on Nov. 18, 1967, the men of the Army’s 266th Chemical Platoon awoke to reveille and assembled in formation. The platoon was attached to the First Infantry Division, and the men were stationed at the division’s base, deep in the red-clay hills north of Saigon.

The men had a typically busy day ahead of them. Their tasks included obtaining 15 drums of Agent Orange to defoliate the base perimeter, firing mortars at an area just outside the base for an evening chemical drop, working at the bomb yard to prepare 24 drums of CS tear gas, making 48 white phosphorus fuses to detonate the drums, loading the drums onto a CH-47 cargo helicopter, and finally, that afternoon, dropping 24 drums of the gas from the helicopter’s rear hatch onto a target site. It was, by 1967, just another day in the life of the 266th Chemical Platoon, and in the American war in Vietnam — a war that was, in many respects, a chemical war.

It didn’t start that way. But as the conflict deepened, it became obvious that chemical weapons could play a critical role. In the case of the First Division, that realization came as the Viet Cong dug in north of Saigon with a network of underground bunkers and tunnels that were forbidding, dangerous spaces where conventional weapons would have limited effect. That fall, the 266th and other chemical platoons began training to use CS and other chemicals to support combat operations.

CS wasn’t the only tool in the platoon’s arsenal, and going after tunnels wasn’t its only mission. It handled anything related to chemicals, from spraying for mosquitoes to burning trash. It sprayed defoliants like Agent Orange and prepared napalm. Chemicals were everywhere, and their proliferation in the American war effort raised concerns that the United States was crossing a line in Vietnam, violating the 1925 Geneva Protocol’s prohibition against the first use of chemical weapons in war.

Chemical weapons didn’t suddenly appear in America’s Vietnam arsenal. In 1918, in response to German gas attacks in World War I, the military created the Chemical Warfare Service (renamed the Chemical Corps in 1947) to develop gas and biological weapons as a response to enemy attacks. They developed defensive measures to protect soldiers from chemical, biological or radioactive weapons via decontamination agents. The armed forces also developed nonmilitary uses of nonlethal chemicals. It supplied tear gas (xylyl bromide) to police forces in the 1920s and ’30s to disperse angry mobs. (British military scientists developed CS as a more potent replacement in the 1950s.)

During World War II, the military played a pivotal role in pioneering new chemicals that were both horrifically destructive and lifesaving. After successfully testing gelled gasoline on Harvard’s soccer field, the military coordinated production of napalm in incendiary grenades, flamethrowers and the bombs dropped over cities such as Tokyo and Dresden, Germany. Chemical units spread a newly discovered insecticide, DDT, across Italian towns and in soldiers’ sleeping bags to control mosquitoes and ticks that carried malaria and typhus. In 1943, the military opened a chemical and biological weapons lab at Fort Detrick, Md., to centralize research.

It was there that scientists in the Crops Division tested combinations of herbicides, including a precursor to Agent Orange made with a blend of the herbicides 2,4-D and 2,4,5-T. Scientists in the 1930s had discovered that those chemicals mimicked a plant’s growth hormone, but they had been unsuccessful in harnessing its growth-inducing powers. Then in 1943, a botanist notified the Army that increased dosages turned the chemical into a plant killer, and the synthetic organic herbicide was born. Scientists at Fort Detrick tested the herbicides for possible use over the tropical vegetation covering Japanese-held islands in the Pacific, but the war ended before they could ramp up production.

While the Chemical Corps continued to test all chemicals for military uses in the 1950s, it did so amid a postwar economic boom during which many of the same products became commercially available. Farmers, gardeners and groundskeepers used the newly available chemicals in their domestic “wars” against pests.

The two herbicides in Agent Orange, 2,4-D and 2,4,5-T, were not secrets; rather, they were two of the most popular, widely available herbicides on the market. The government declassified its research on pesticides almost immediately in 1945, opening development for commercial markets. In May 1945, a chemist at the American Chemical Paint Company near Philadelphia received a patent simply titled “Herbicides,” listing over a dozen preferred chemical formulas including a 50-50 mix of 2,4,5-T and 2,4-D similar to Agent Orange. (He later claimed that he developed this blend to kill poison ivy, as his son was acutely allergic.) In 1948, the Department of Agriculture registered those new herbicides and insecticides as “economic poisons” and sales quickly took off. Because of this crossover identity in the 1960s, their use as offensive weapons in Vietnam drew little public reaction.

Although the consequences of using herbicides like Agent Orange later became clear, they were always intended as nonlethal chemical weapons. The line was less clear with CS gas. Though it was officially intended to flush out tunnels, those caught inside were often asphyxiated, and even survivors suffered respiratory lesions.

And there was no blurring of lines when it came to napalm.

Men from the 266th platoon would net a dozen or more barrels of the gelled gasoline under a helicopter, which then flew several thousand feet above a target such as a bunker or camp. Once on target, the crew released the barrels. Fuses or strafing from nearby jets ignited the barrels just above the ground, releasing a giant fireball. Anything or anyone within several hundred yards was instantly incinerated while the firestorm sucked the oxygen out of tunnels and bunkers below. Chemical platoons began training in this new form of “combat support” in 1967, but after the Tet offensive in 1968 they were igniting thousands of gallons in “flame drops” every day. They had crossed the line.

This rapidly intensifying use of chemicals in combat brought widespread international criticism, first from Communist countries but increasingly from American allies and eventually officials in the United States. Criticism had been building for years: When South Vietnamese helicopters began using 2,4,5-T to kill crops in Communist-controlled areas of the Vietnamese highlands in 1963, North Vietnam’s Liberation Radio accused the United States of violating the 1925 Geneva Protocol and likened the “poisonous spray” to Nazi gas chambers. But American leaders and their allies abroad paid little attention to these “poison” protests; military leaders countered the radio propaganda with South Vietnamese broadcasts explaining that the herbicides were harmless to humans and used commercially around the world.

The international response, however, grew more serious with the CS drops. In 1966, a delegate from Hungary at the United Nations complained that the tactical use of the herbicides and CS in Vietnam was a blatant violation of the Geneva Protocol; he also noted that the United States had yet to join the protocol. With the advent of flame drops in 1968, the charges of chemical warfare continued to amplify and rattled the newly elected President Nixon. In November 1969, he pushed the Senate to ratify America’s commitment to the protocol, and he renounced first use of lethal chemicals (except napalm on military targets).

While Nixon tried to assure the American public that napalm was not falling on civilians and that the herbicides in Agent Orange were safe, a report had surfaced in 1968 suggesting that the herbicide 2,4,5-T was highly toxic to animal fetuses. (Later research determined the toxicity stemmed from traces of the contaminant dioxin.) While chemical platoons continued pushing thousands of drums of CS and napalm out of helicopters in Vietnam, Nixon moved quickly to stem what he feared would be a domestic and international protest over a potentially toxic herbicide. The White House announced a partial ban on 2,4,5-T on April 15, 1970, and the Defense Department followed suit, banning all Agent Orange missions in Vietnam.

Thousands of drums of the herbicide piled up at ports in the United States, at air bases in Vietnam and in small quantities at the drum yards of chemical platoons at Army camps. The military transferred the stockpile of Agent Orange in Vietnam, more than 25,000 drums, to Johnston Island in the Pacific in 1972, but the fate of CS and other chemicals at the camps was less clear. When American forces evacuated their camps and firebases at the war’s end, they again followed disposal manuals of the day: burning or burying unused or corrupted chemical stocks including CS, decontaminating agents, solvents and pesticides.

The American military has never again used chemicals as extensively as it did in Vietnam. American military units no longer burn or bury chemical waste. But the legacy remains. Agent Orange destroyed the lives of thousands of Vietnamese and Americans. The international response to CS drops and flame drops set off heated discussions about the nature of chemical war that continues with debates over red lines, incendiaries and barrel bombs today. And caches of chemical weapons remain buried around Vietnam and on disused American sites around Southeast Asia and in the Pacific. America and Vietnam may be allies today, but few people on either side are willing to tackle the war’s total chemical footprint.