Vietnam: The Real War – in pictures 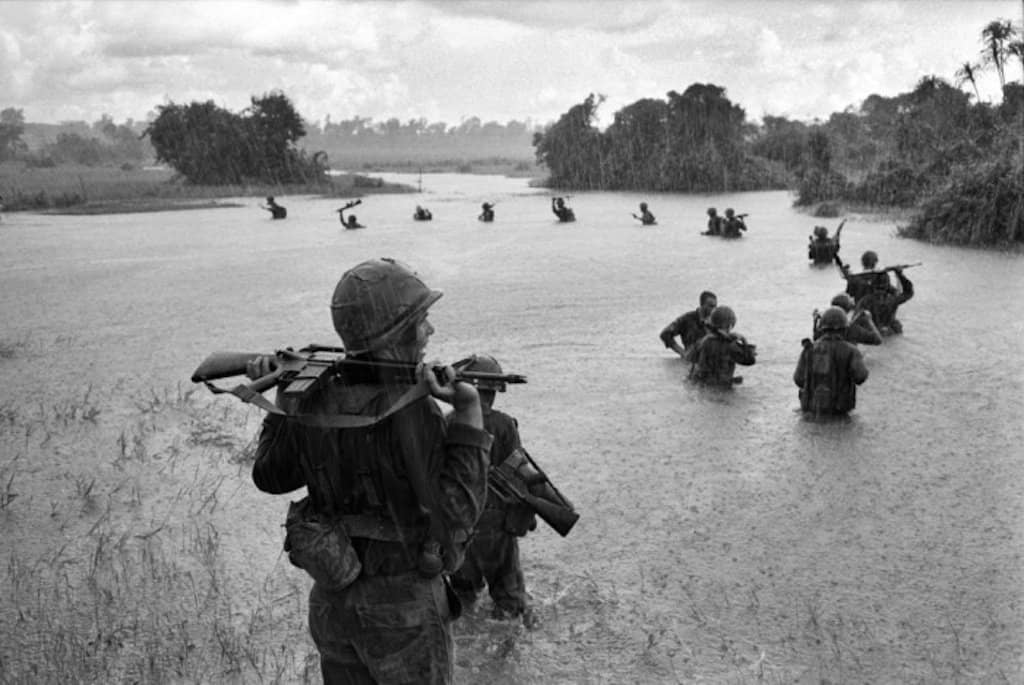 This article originally appeared at The Guardian.

From Malcolm Browne’s photograph of the burning monk to Nick Ut’s picture of a nine-year-old girl running from a napalm attack, the Associated Press’s Saigon bureau captured the realities and tragedies of the Vietnam war. AP won six Pulitzer prizes for its war coverage, four for photography. Now, a selection of these images can be viewed at Guardian News & Media, London N1 9GU, until the end of May 2015

Vietnam 40 years on: how a communist victory gave way to capitalist corruption 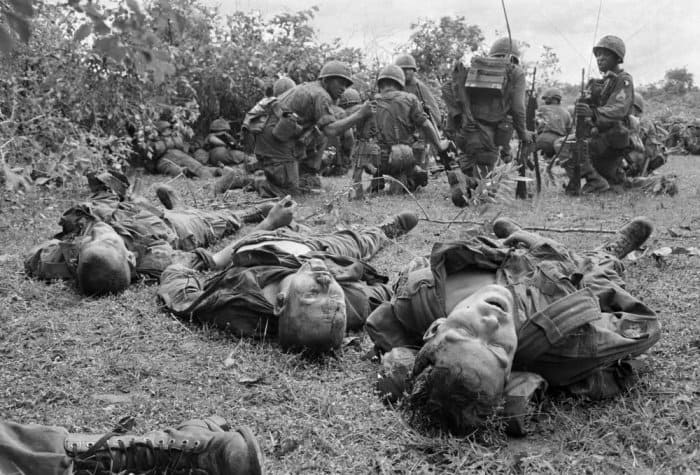 Bodies of US paratroopers lie near a command post during the battle of An Ninh, 18 September 1965. The paratroopers, of the 1st Brigade, 101st Airborne Division, were hit by heavy fire from guerrillas that began as soon as the first elements of the unit landed. The dead and wounded were later evacuated to An Khe, where the 101st was based. The battle was one of the first of the war between major units of US forces and the Vietcong
Photograph: Henri Huet/AP 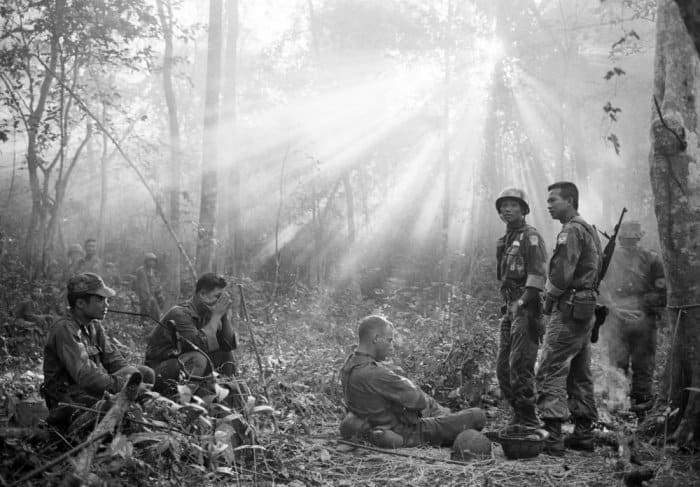 Sunlight breaks through dense foliage around the town of Binh Gia as South Vietnamese troops, joined by US advisers, rest after a tense night of waiting in an ambush position for a Vietcong attack that did not come, January 1965
Photograph: Horst Faas/AP 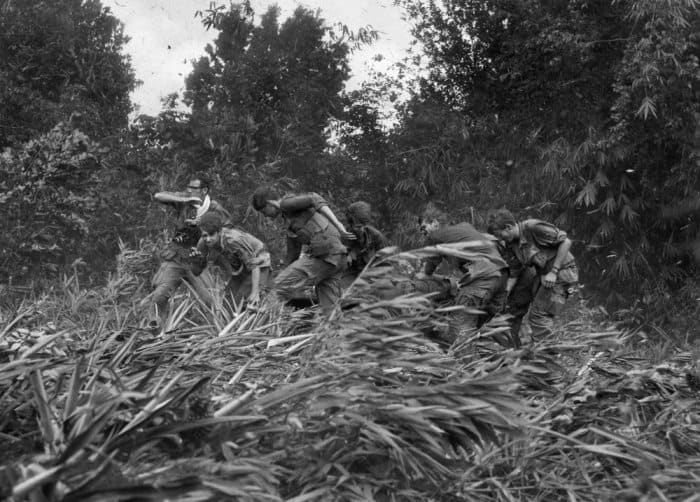 Life magazine photographer Larry Burrows (far left) struggles through elephant grass and the rotor wash of an American evacuation helicopter as he helps GIs carry a wounded soldier on a stretcher from the jungle to the chopper in Mimot, Cambodia on 4 May 1970. The evacuation came during the US incursion into Cambodia. Burrows was killed on 10 February 1971, along with the photographer who took this picture, Henri Huet, and two other photojournalists – Kent Potter of UPI and Keisaburo Shimamoto of Newsweek – when their helicopter was shot down over Laos
Photograph: Henri Huet/AP 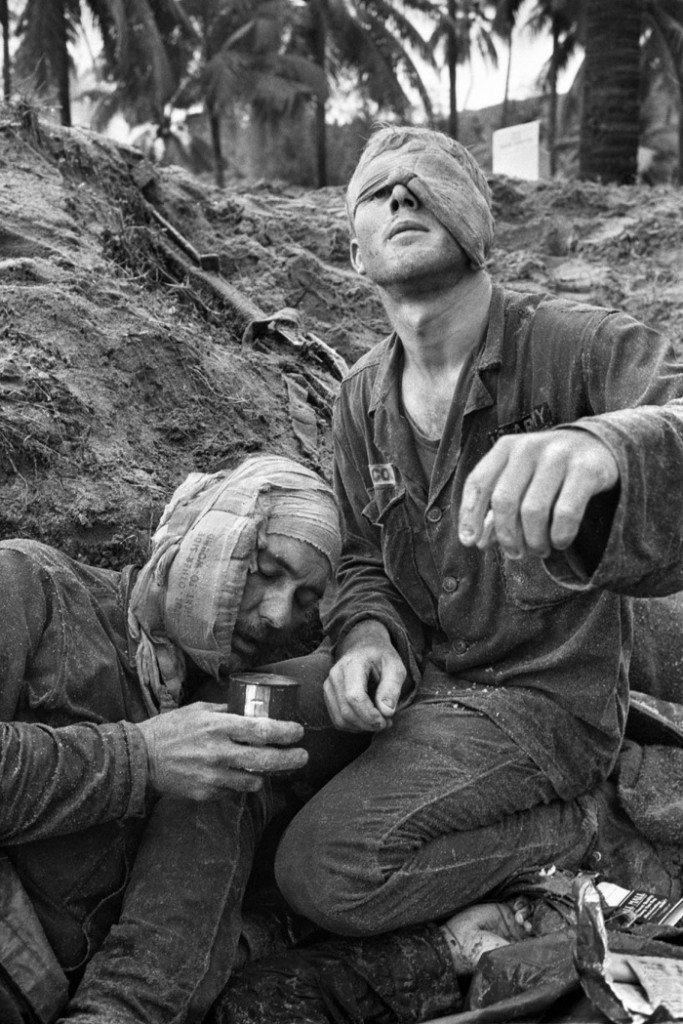 Medic Thomas Cole looks up with his one unbandaged eye as he treats wounded Staff Sergeant Harrison Pell during a firefight on 30 January 1966. The men belonged to the 1st Cavalry Division, which was engaged in a battle at An Thi in the central highlands against combined Vietcong and North Vietnamese forces. This photograph appeared on the cover of Life magazine on 11 February 1966. Photographer Henri Huet’s coverage of An Thi received the Robert Capa Gold Medal from the Overseas Press Club Photograph: Henri Huet/AP 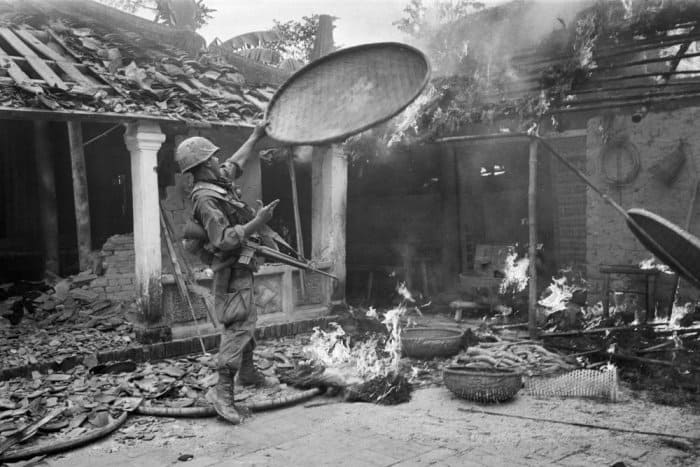 A 1st Cavalry Division soldier throws a rice basket on to the flames as his unit sweeps through a village near Tam Ky, 350 miles north-east of Saigon, on 27 October 1967. A peasant woman had tried to salvage the basket from the burning house, but US troops were intent on destroying anything that might be of value to the Vietcong
Photograph: Dang Van Phuoc/AP 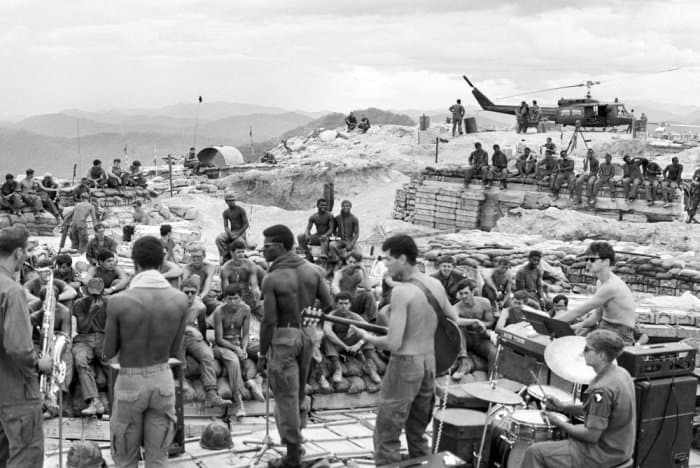 GIs of the 3rd Brigade, 101st Airborne Division, launch into a rock session while surrounded by symbols of the war: wooden bunkers, helicopter and sandbags, in July 1970. The soldiers were dug in at Firebase Kathryn on a hill south of the DMZ
Photograph: Giancarlo Meyer/AP 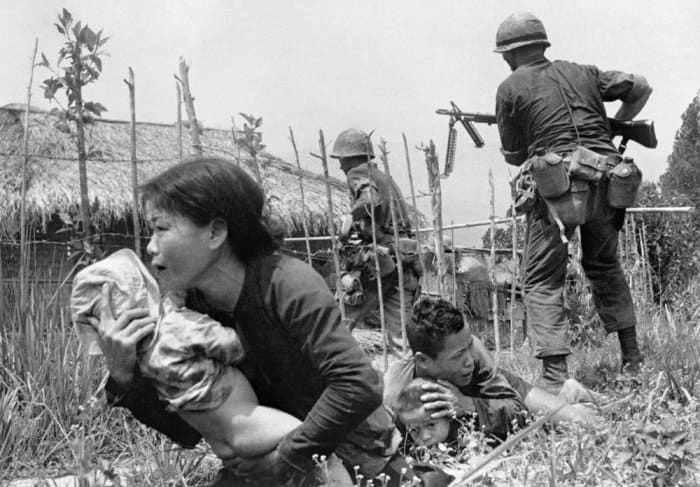 Under sniper fire, a Vietnamese woman carries a child to safety as US marines storm the village of My Son, near Da Nang, searching for Vietcong insurgents, 25 April 1965. As was typical in such situations, the men of the village had mostly disappeared, and the remaining villagers revealed little when questioned
Photograph: Eddie Adams/AP 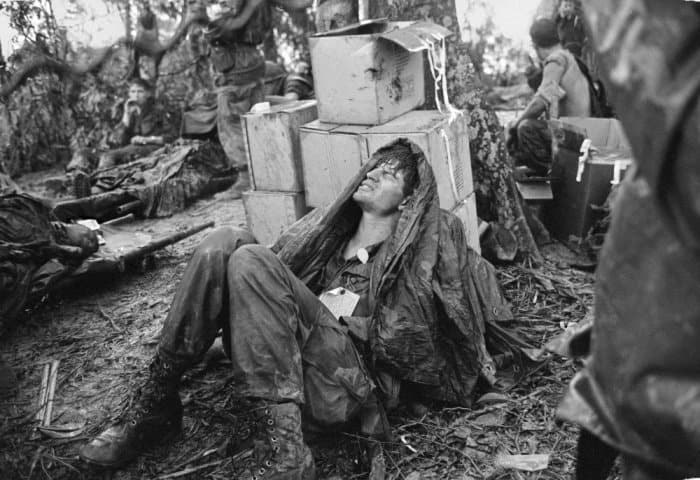 A US paratrooper, wounded in the battle for Hamburger Hill, grimaces in pain as he awaits medical evacuation at base camp near the Laotian border on 19 May 1969
Photograph: Hugh Van Es/AP