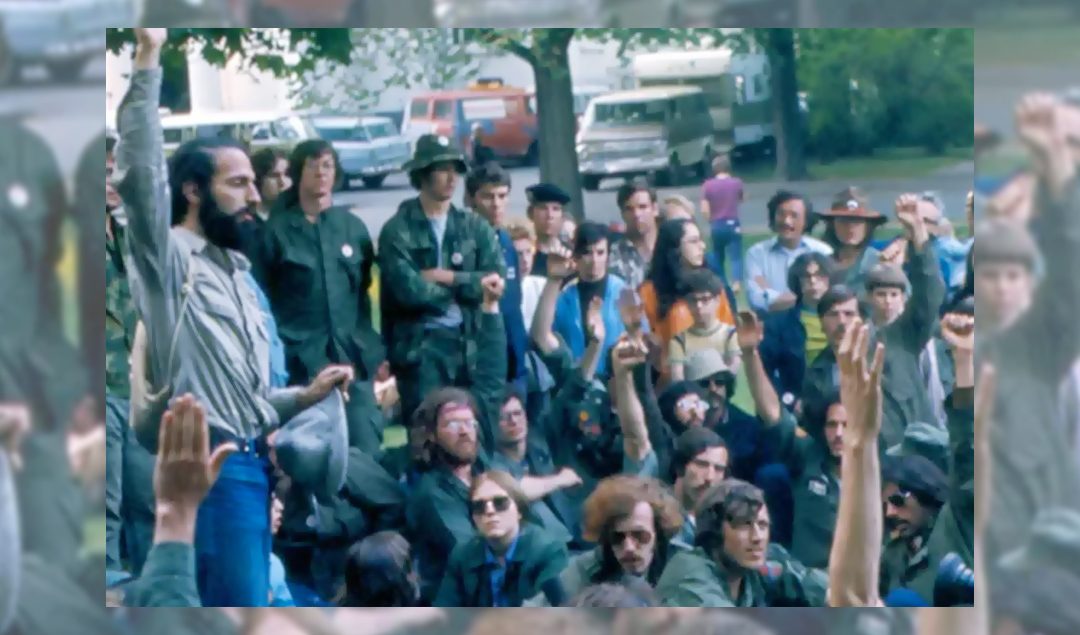 Featured photo above: Vietnam Veterans Against the War (VVAW) members vote to remain on Lexington Green in defiance of an order by local government to vacate, May 30, 1971. VVAW were subjected to a mass arrest, but gained support by town residents who gave them rides to the Bunker Hill monument in Charlestown to continue the group’s march from Concord to Boston. Photo Richard Robbat.
Professor of Literature at Purchase College, SUNY, Elise Lemire is the author of the just-released Battle Green Vietnam: The 1971 March on Concord, Lexington, and Boston and other titles.

Citing continuing public health concerns about COVID-19, the city of Boston has declined again this year to issue a permit allowing the annual and always much-anticipated Bunker Hill Day Parade to proceed through the streets of Charlestown.

The hiatus is an opportunity to recall the holiday’s history and the summer fifty years ago when the country was as politically divided as it is today, until Vietnam Veterans Against the War, or VVAW, insisted on celebrating Bunker Hill Day early.

Bunker Hill Day was initially intended to commemorate the role Massachusetts played in securing the nation’s independence.  Fought on June 17, 1775, the Battle of Bunker Hill was a pyrrhic victory for the imperial British.  The newly formed Continental Army was forced to retreat but not before inflicting enough damage that British forces were confined to Boston.  Famously fought on nearby Breed’s Hill, the battle’s anniversary was first observed with a parade in 1785.  On the fiftieth anniversary, the newly formed Bunker Hill Monument Association organized the first Bunker Hill Day.  While very much a local holiday then as now, the entire nation observed it in 1843, when the Association’s soaring 221-foot granite obelisk was dedicated.

After Irish immigrants moved into the neighborhood in the final quarter of the nineteenth century, Charlestown became “the only place on the planet,” as famously noted by actor Will Rogers, “where the Irish celebrate a British military victory.”  A cartoonist from that era was prompted to draw a picture of the obelisk with the words “Erected by the Irish in Memory of Patrick O’Bunker of Cork.  Observances came to include companies of reenactors marching in colonial attire to the cadence of fife and drum, as well as elements of Irish peasant culture, including carnivals, fireworks, and alcohol.  As journalist J. Anthony Lukas put it, Bunker Hill Day became “an exuberant statement of Charlestown’s independence from the rest of the world.”

The late 1960s and early seventies were difficult years for Charlestown.  To the dismay of many white parents, the Massachusetts legislature was insisting on school desegregation.  And, as a working-class neighborhood, Charlestown was sending a disproportionate number of its children to fight in Southeast Asia.  The Charleston community engaged in activism on behalf of anti-busing efforts, sometimes resorting to violence; however, few joined what became the most vocal and sustained antiwar movement in US history out of fear of hurting troop morale.

No one could predict how this community, very much on edge in the spring of 1971, would respond on the Sunday evening of Memorial Day Weekend when not the British, but a wave of American Vietnam veterans swept up Breed’s Hill towards the obelisk the Irish-Americans in Charlestown had made their own.

Forty-eight hours earlier, over one hundred members of VVAW dressed in jungle fatigues had commenced a three-day march that was intended to retrace Paul Revere’s mythic midnight ride in reverse.  Like Revere, the antiwar veterans were seeking to bring a message to the people, in their case that the country had shamefully reversed its earlier course and become the type of imperial aggressor the colonists had once fought to vanquish.  The march route passed through four Revolutionary War battlefields where the veterans planned to demonstrate their patriotic respect for their colonial brothers-in-arms while illustrating with their physical wounds and anguished spirits how far the nation had fallen from its founding ideals.

VVAW’s march kicked off without incident in Concord, where officials from the National Park Service had granted the veterans permission to camp next to the Old North Bridge, and townspeople served the veterans a hearty dinner.  In marked contrast, the Lexington Selectmen (the Massachusetts equivalent of a town council) refused to grant the veterans permission to camp the second night of the march on the town’s sacred Battle Green.  Intent on punishing the veterans for what he later described as deflating the spirits of those troops still in harm’s way, the Chairman of the Board of Selectmen ordered a mass arrest.

When the veterans were released from the town’s makeshift jail and had paid their fine in county court, they considered skipping Bunker Hill, the final Revolutionary War battlefield on their itinerary.  The mass arrest had taken up a lot of time and they were now at risk of arriving late to the Memorial Day antiwar rally on Boston Common to which they had invited the public.

Of greater concern was the fact that Charlestown might not be as welcoming as the liberal elites of Lexington, many of whom had decided to get arrested with the veterans and who would later ensure the Chairman was not re-elected.

Over a dinner prepared for them by one of Lexington’s congregations, the veterans conferred about what to do.  Buoyed by the national media’s sympathetic coverage of the mass arrest, a wounded veteran living at the Bedford VA hospital urged the veterans onwards.

“We’ve already begun the Battle of Lexington,” he enthused about VVAW’s success thus far in unleashing the energy that birthed the nation.  “The whole country knows it.  So let’s go on to Bunker Hill.”

The problem of lost time was solved by hitching rides to Charlestown from their Lexington supporters.  Disembarking in Sullivan Square so they could respectfully approach the Bunker Hill battlefield on foot as the descendants of those who fought and died there, some of the veterans later recalled feeling very worried about how they would be received.

“Was it gonna be food and acceptance or sticks and stones?” one wondered.

As the veterans started uphill toting the very real-looking toy M16s they had carried from Concord as a sign of their authority to speak about the war, windows in the tenement buildings lining the narrow streets flew open and cheers erupted from them.  The veterans had served alongside Charlestown’s own sons and were being honored as such.  Minutes later, when the veterans set foot on the hallowed ground where so many Americans had died so that their children could be free, Charlestown’s residents bore silent witness as the veterans ceremoniously rejected their weaponry in a message that the war must end.

“We love you and we are happy to be here with you,” one of the still stunned veterans exclaimed to these new supporters who hours before VVAW considered avoiding.  “We must begin to share with one another the peace we need right now.”

The next morning, when the veterans emerged from their tents, countless residents returned to their side, offering food and coffee to fuel the veterans’ final push for Boston.

Fifty years ago this summer, Bunker Hill Day was celebrated early by Charlestown’s residents and a new breed of antiwar activists who came together around the idea that the Vietnam War did not reflect the values for which the colonists gave their lives on Breed’s Hill nor those of the Bunker Hill Irish-American community whose children were being forced to fight it.  It was a victory for VVAW and the antiwar movement as great as the ones traditionally celebrated on Bunker Hill Day.