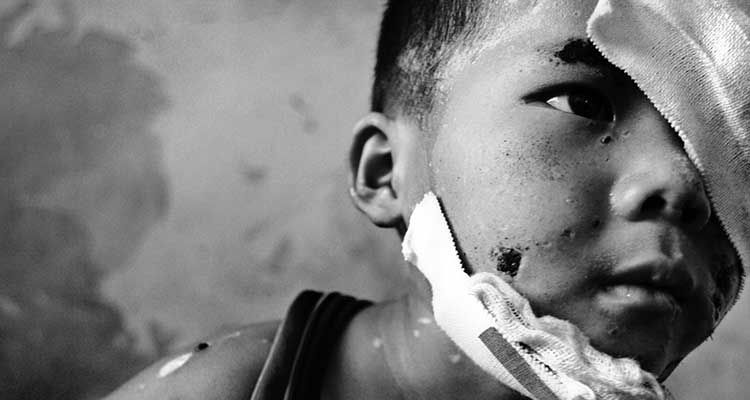 QUANG TRI PROVINCE, Vietnam – A demining team carefully removed a pile of rusty explosives – each one still able to kill or maim – from a quiet ploughed field where fierce fighting once raged in the Vietnam War.

Shortly after the lethal mortars and grenade launcher rounds were taken away, an anxious farmer in her 50s marched over to the team during their recent mission.

The farmer, Van Thi Nga, stumbled across the relics while growing vegetables, the main source of income in her village that sits along the war’s former demarcation zone and is strewn with hidden explosives.

“I’m afraid of more bombs but I need to work,” she said. “I have to risk death just to earn money.”

But there was no time for sympathy as the busy team frankly told her to report others if she sees more. The bomb disposal experts then did a brief sweep with a metal detector and left to their next call to destroy an unstable bomb in a nearby rice paddy.

Demining teams, either run by Vietnam’s army or international groups, face an epic task where roughly 20 percent of the country is littered with unexploded ordnance (UXO) – bombs, mines, munitions and other explosives.

This central Vietnam province is the worst-hit region, with more than 80 percent of the land still peppered with deadly devices after 350,000 tons of them were used here.

In total, almost four times more firepower was deployed on Vietnam during the war than in all of World War II.

Around 10 percent of the explosives are believed to not have detonated and up to 800,000 tons of UXO remain in the communist state. That’s even beyond the 635,000 tons of bombs that U.S. forces dropped in the entire Korean War.

“The contamination in Vietnam is huge,” said Portia Stratton, country director of Mine Advisory Group, the largest non-profit demining group in Vietnam. “We’re still finding the same number of UXO that we were finding [when we started here] 15 years ago.”

Introduced in 2010, Vietnam’s mine action strategy came years after other UXO-infested nations including its neighbors, Laos and Cambodia, which were also heavily bombed to jam communist supply routes in the war.

“Vietnam is lagging behind a lot of other countries that have significant levels of contamination,” Stratton said. “We still don’t have a full picture of what our efforts have achieved.”

Since the end of the war in 1975, war remnants have killed more than 42,000 Vietnamese and injured at least 62,000 others, according to preliminary statistics by the government.

In March, the Vietnam National Mine Action Center was launched to provide more oversight in the secretive state, which already had similar mine action bodies at the national level.

Stratton warns that the new center may serve as another bureaucratic layer and further delay mine action services that often take up to one year to get government approval.

Despite its fondness for red tape, Vietnam has revived itself as one of the fastest-growing economies in Asia after devastating warfare with U.S. forces.

In 2009, the country gained lower middle-income status but the distinction has created a sort of Catch-22 paradox as foreign donors redirect funds elsewhere.

“There’s more of a challenge now to enable us to secure funding,” said Rickard Hartmann, country director for APOPO, a Belgium-based demining group. “We are very happy that Vietnam is developing but at the same time more and more donors are reducing their support.”

The 50-member APOPO group began operations in January after the German non-profit Solidarity Service International pulled out its 160 personnel from the area, leaving a two-thirds reduction in skilled labor, he said.

Prime Minister Nguyen Tan Dung recently called on the global community to boost support saying that “since the explosive contamination is so great, Vietnam truly needs assistance and support.”

Vietnamese officials claim that $10 billion is required to completely rid existing UXO – a feat that would take up to 300 years for the country to do on its own, they say.

Around 35,000 hectares of unsafe land is cleared annually but the state has ambitious plans to nearly triple that target to 100,000 hectares if external aid is increased.

Yet the government spends about $80 million on mine action, or less than 0.20 percent of its national budget.

Deputy Minister of Vietnam’s Ministry of Planning and Investment Nguyen The Phuong admitted that the meager funds “could not meet the actual needs of mine action activities.”

He also cited poor coordination between state and provincial entities, lack of human resources, and technology and equipment shortages as other factors hindering progress.

A 2012 assessment on Vietnam’s mine action program, conducted by the Geneva International Center for Humanitarian Demining, revealed that the government and state-connected private investors bankrolled 92 percent of activities from 2007 to 2011.

The government currently expects foreign donors to cover about half of the estimated $368 million required for mine action from 2013 to 2015, according to a 2013 update on the national strategy.

But foreign donors only doled out $8.7 million for mine action in 2012, with the U.S. contributing more than 40 percent of the total, the Landmine and Cluster Munition Monitor reported.

Vietnam may be entitled to more foreign aid if they signed the Mine Ban Treaty and the Convention on Cluster Munitions that prohibits their use.

Even so, landmines are seen as legitimate weapons for border security. Officials also reject the cluster bomb pact since the 10-year deadline for member states to finish land clearance is unrealistic to them, they said.

Ironically, cluster bombs would likely delay the country due to how they were dispersed in the war. Hundreds of cluster bombs – each about the size of a tennis ball – were packed inside large air-dropped canisters that scattered the bomblets over wide swaths of the countryside.

Although designed to explode on impact, many of them did not.

To deal with the funding shortfalls, bomb experts rely on villagers to be their eyes and ears for war remnants.

“To clean up every bomb and mine in Vietnam is impossible,” said Hien Ngo, spokesperson for Project Renew, a demining group that also empowers locals. “It’s a daunting task that will never likely be achieved, so we want to make sure that the land is safe by educating people about the risks.”

Ngo has already seen the value of his group’s education programs that are taught in schools and to those who come to their mine action visitor center in the province’s largest city.

He recalled when a 12-year-old boy halted a crew driving to another call and led them to a cache of 180 explosives concealed in the dense jungle.

“The boy learned what to do after he visited the center,” he said. “Now people are helping us report explosives.”

Nguyen Xuan Tuan, 29, wished he knew the dangers of war relics before he scavenged for scrap metal at a deserted U.S. military base back in 2002.

After his friend found something on a metal detector, Tuan sliced the ground with his shovel. But as he dug deeper, he struck a cluster bomb.

The blast severed his right hand, cut deep scars across his body and knocked him into a three-day coma.

“I woke up seeing my parents crying and I realized that I was in a miserable situation,” he said. “The only thing I could do was cry and think that this was the end of my life.”

Tuan, one of the nation’s five Ban Advocates that campaign against cluster bombs worldwide, is now using his experience to educate others throughout the province.

“I’ve been very lucky to be exposed to the outside world,” he said. “In rural areas, many voices are not being heard and people do not receive the assistance they need.”

By the end of 2015, Vietnam aims to develop a national database and expand risk education to the most dangerous areas.

The U.S. also continues to be the top donor for mine action activities in Vietnam, giving over $62 million so far, officials say.

But 50 years after the U.S. military drastically built up its presence to counter evasive communist fighters, Ngo said that both sides have failed to tackle the aftermath and must “step up” their efforts.

“Although we see positive developments to make the war’s legacy finally history, bombs and mines are still killing and injuring people,” he said.