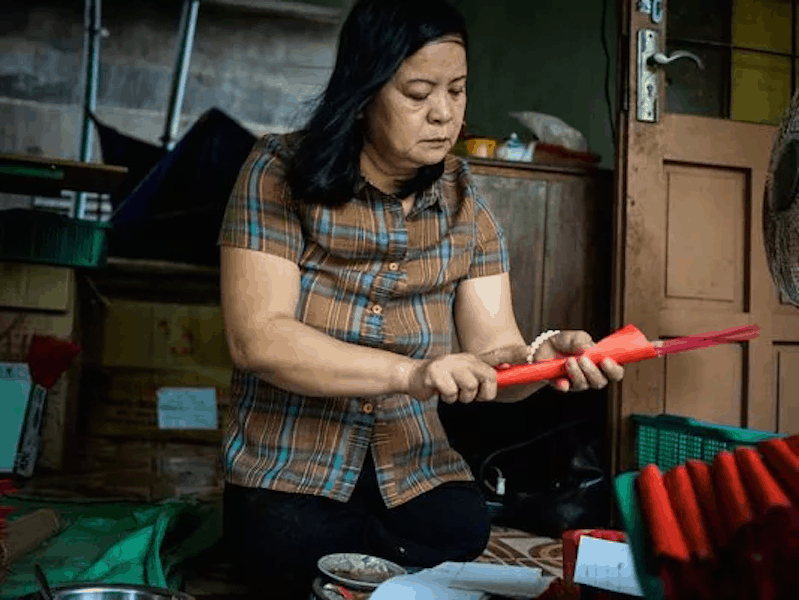 This article originally appeared at USAToday.com.

DONG HA, Vietnam — While the war has become a distant memory in many parts of Vietnam, lethal reminders are part of everyday life in Quang Tri Province.

Located along the demilitarized zone that divided Vietnam during the war, Quang Tri was one of the most heavily bombed areas in military history, with more bombs dropped here than on all of Germany during World War II.

Many of those bombs landed without exploding.

Overall, an estimated 800,000 tons of unexploded ordnance remained in Vietnam after the fighting stopped in 1975. It has caused more than 100,000 casualties, including 40,000 deaths. And in Quang Tri, where more than 80% of the land area is still contaminated by mines and explosives, it remains a grim fact of life.

Children are taught from an early age not to pick up or touch any metal object they might find when playing outdoors. Farmers in uncleared areas live with the threat that any day they might unearth — and set off — a deadly explosive from a war that ended more than 40 years ago.

And thousands of victims have had their lives forever altered by the remnants of a war they had no part in.

Nguyen Thi Cuc, now 58, lost both her legs in 1986. She was gardening with her father at their home in Dong Ha when she struck a “bombie” — the local nickname for the small, baseball-size cluster bombs dropped by American forces.

After spending two months in the hospital, Cuc was able to return home to a 1-year old son and a new life in an area with few resources for the disabled. She eventually found a job at a community center for the blind, where she sits on the floor day after day, wrapping bundles of incense.

Like so many in Quang Tri, Cuc seems to have accepted her misfortune with the almost startling sense of resilience and forgiveness that has characterized so much of postwar Vietnam, which has also grappled with the devastating effects of Agent Orange.

“Right after the accident, I felt angry and wondered why it happened to me,” Cuc says. “But after a long time, I got familiar with my condition. I saw how the war affected so many other people, so I don’t feel angry anymore.”

Nguyen Van Phuong, 45, is also strikingly philosophical. As a youth, he was helping classmates plant a tree at his rural school when they hit a cluster bomb while digging. Four of his friends died instantly, while shrapnel from the bomb cost Phuong a leg and blinded him in one eye.

“I sometimes imagine what my life would be like if the accident didn’t happen,” says Phuong, who makes a living fixing bicycles. “But I’m just one small person in this society. I don’t dwell on the past.”

Efforts by the Vietnamese government and international groups — including Project RENEW, Mines Advisory Group, Norwegian Peoples Aid and PeaceTrees Vietnam — have been making slow but steady progress in clearing Quang Tri of ordnance.

The work remains painstaking, with mine-clearing teams scanning roads and trails step by step with metal detectors. In 2014, one Vietnamese official said it could take as long as 300 years to clear all the ordnance. But groups operating on the ground are targeting a five- to 10-year time frame to reach what is called a “manageable level” of contamination, says Claire Yunker, director of Seattle-based PeaceTrees Vietnam.

She says her group clears an average of 60 to 100 bombs and mines per month, and the progress all the teams are making is having a profound effect: There hasn’t been an accident in the province over the last 10 months.

Even as it becomes safer, Quang Tri still faces daunting challenges moving forward. It remains one of the poorest provinces in Vietnam, in part because its economic prospects have been hampered for so long by its heavy contamination. PeaceTrees and other aid groups are building schools and have implemented programs for sustainable development, microcredit lending, farming projects and more.

The clearing work “will be successful and really reduce the impact of (unexploded bombs) on people, but the long-term economic recovery is another thing,” Yunker says. “That will take time, but I do think there’s promise in that too.”

Cuc’s wish for the future is simple and poignant. “I want peace to last forever, so other people don’t have to be affected the way I was.”