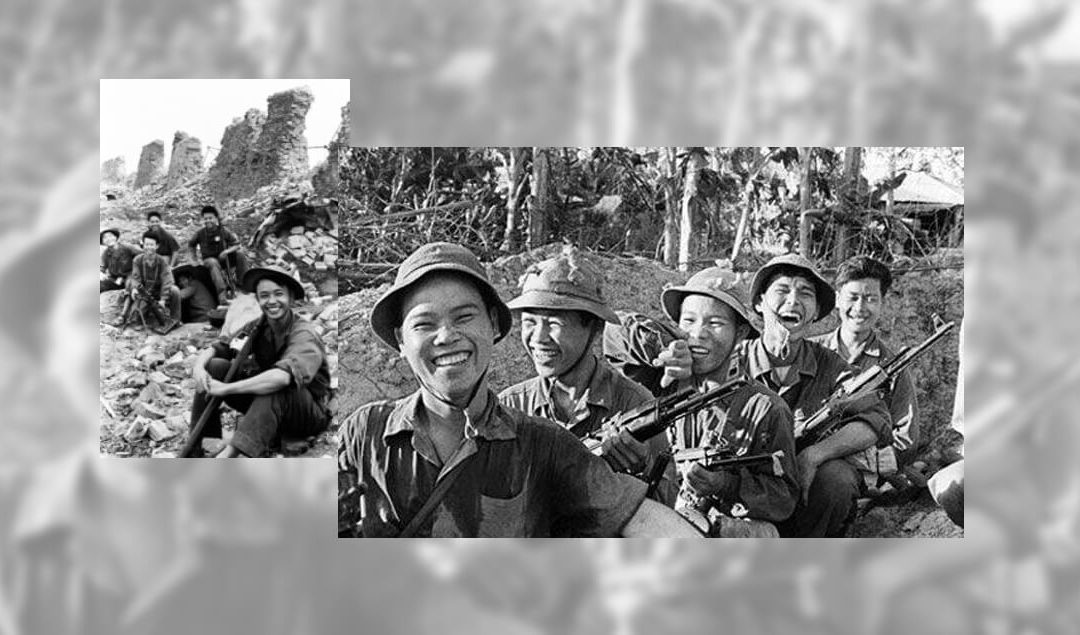 Growing up in Hanoi, most of the elderlies I have met are Vietcongs, so I want to share with you some stories from the Vietcong veterans I know, as I believe it is crucial that we know stories from both sides and feel for each other. Please share with me your side of the stories, I’m eager to know!

It is also important to note that 50 years after the war, when most of us think the Vietnam war has ended, everyday somewhere in Vietnam people still die from the aftermath of the war. So please also read the second part about how leftover bombs are still killing our generation in peacetime!

ANECDOTES ABOUT BOMBS THAT HAVE EXPLODED

During the Vietnam war, more bombs were used than the entirety of WWII. In one single battle in Quang Tri – the border between North and South Vietnam and the most attacked city during the war – the bombs used had the destructive power of 7 nuclear bombs in Hiroshima.

The already exploded bombs alone had caused enough suffering. My grandmother was a war photographer in Quang Tri. She remembers one battle when her soldier friends, mostly high school seniors and college freshmen, had a cup of coffee delivered to them down the tunnels of the battlefield – a rare luxury. In the middle of the bombing (which lasted for 81 days), they knew they weren’t living very long to taste coffee any other time. So they passed the coffee around, each of twenty people taking a single sip. The coffee never made it to the last five people when the tunnel collapsed and most of them were killed.

One of the soldiers who survived the war – a bright, handsome young freshman in my grandmother’s description – went crazy after the killing ended. His family tried to get him a job at a factory to get him back to normal life, but he was no longer the young man he once was. He went around wreaking havoc in the factory, smashing machines and goods until they had to sack him. My grandmother never heard from him again until he died from unknown reasons in his thirties.

The old gentleman next to my door was also a soldier in Quang Tri, who luckily kept his sanity and was able to pass on his stories. You think Vietcong had training before they were put to the battlefield? NO. They enlisted from college, then transported straight to the hell pots all over the country, because simply there was no time for such things as training. The commander shouted “Forward!”, and all they knew next was that they had to advance forward and shoot or get shot. My neighbour had to cross a river: with nothing but a bag to hang onto, he dove into the river and in the hope that the water would push him to the other side before a bomb hit him. That was why the Thach Han river in Quang Tri was clogged with dead bodies only after 81 days, and people know there are still soldiers lying down there in the river bed nowadays.

The surviving soldiers did their best to preserve dead comrades, whether by sheltering them behind walls or burying them deep underground so that their families could find their children one day. Unfortunately, the vast majority of the bodies were eventually blown up in subsequent bombardments, and not many families could recognize their loved ones after the war. An average Quang Tri Vietcong took 4 tonnes of bombs and 100 bullets to his or her body.

Despite being able to lead a normal life after the war, my veteran neighbour was still haunted by the trauma it left. He would wake up at night if there was a loud sound because it reminded him of the bombs that killed his comrades. He would have nightmares about all who sunk into the Thach Han river, and about the yellow, utterly and terrifyingly yellow sky of Agent Orange. It was like another world when the sky isn’t blue anymore, but is deadly yellow. When he had children, he waited in anxiety for them to show symptoms of Agent Orange (which they luckily didn’t). When he had grandchildren, again he waited in fear of their being deformed because of what he breathed in 50 years ago (which they luckily didn’t).