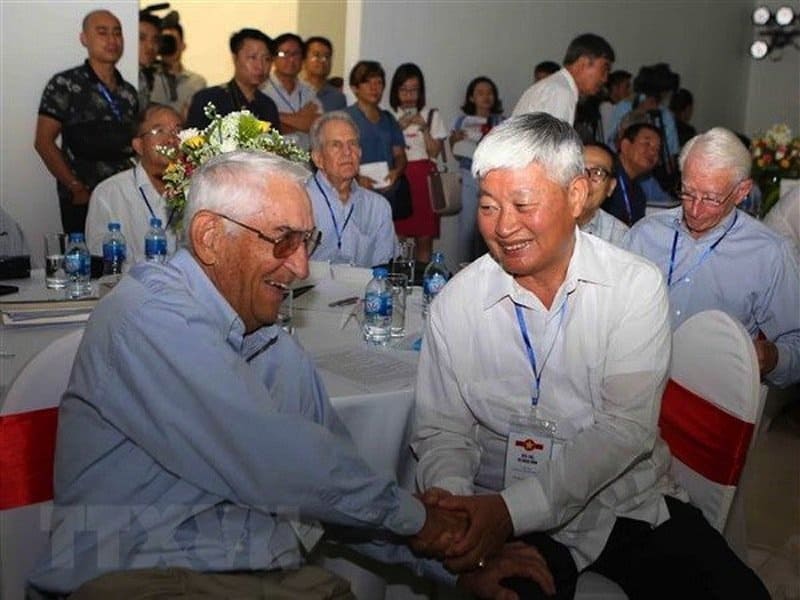 Photo: Vietnamese and American veteran pilots, who were once enemies of each other in the air during the anti-US war, reunited in Hanoi on October 3 for the third time.

In his remarks at the event, Lt. Gen. Nguyen Duc Soat said the Vietnamese and US veteran pilots met for the first time in Hanoi on April 13, 2010 and their second meeting took place in San Diego, California, the US, in September seven years later.

This event is not only a chance for the aviators to recollect their air battles nearly a half-century ago, but also demonstrates the desire to boost the Vietnam – US relations as reflected in the motto “From dogfight to detente and cooperation for development,” Soat noted.

This year’s gathering saw fighter pilots from both sides of the war who fought in air battles during the war in Vietnam more than 40 years ago. Some shot down their enemies; some were shot down. They had the opportunity to tell their part of stories back then and learn about others’ life at present.

Soat called this type of meetings between Vietnamese and American veteran pilots “historic” and “humane.”

More and more veteran pilots from Vietnam and the US become interested in these meetings, which show the strong development of the two countries’ ties, Tutt said. – VNA