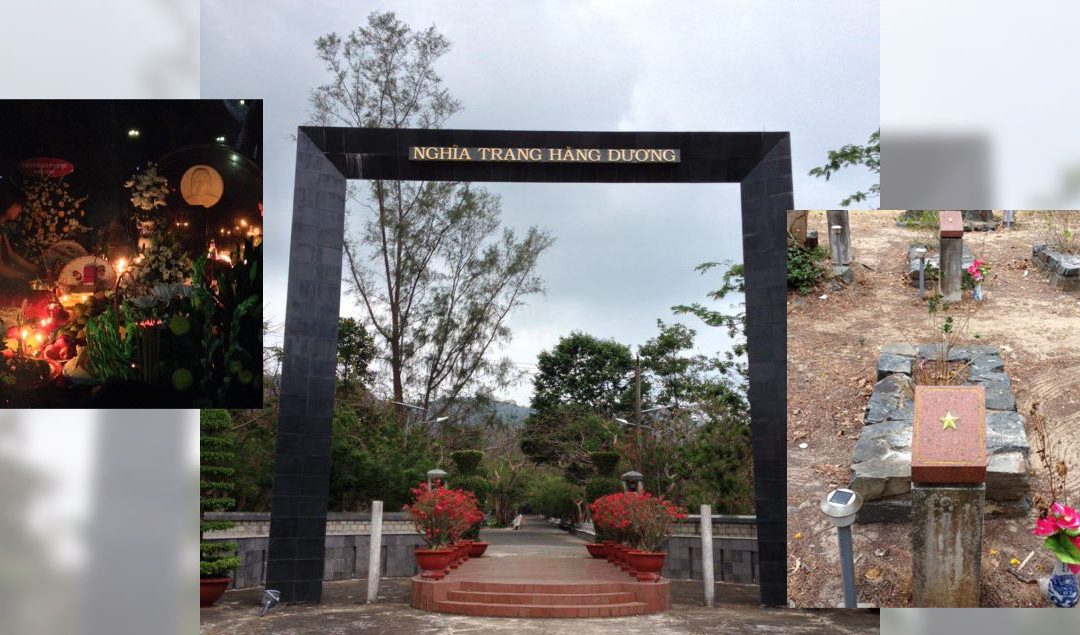 by Mark Ashwill at CounterPunch

A short up-and-down overwater flight from Tân Sơn Nhất International Airport and, voilà, you’ve arrived. While your destination is just off the coast of southern Vietnam, it may as well be another world. In less than an hour, you are transported from the hustle and bustle of Ho Chi Minh City (Saigon) to the quiet and melancholic beauty of Côn SơnIsland, the largest and most infamous in the 16-island Côn Đảo Archipelago.

Vietnamese come from far and wide not just to enjoy breathtaking views of the sea, fresh seafood, and invigorating walks along pristine beaches, but also to participate in a solemn pilgrimage to dark places that are a legacy of French and US brutality. They are a stark testament to the supreme arrogance of one fading colonial power that handed the blood-stained baton to an ascending neocolonial power, both convinced they had the right to determine the destiny of a country not their own. Many of those who travel here are war veterans and former prisoners who pay homage to their fallen comrades.

This tropical paradise was a penal colony during the French colonial era and the US War in Vietnam.  For 22,000 Vietnamese and some Cambodians, Côn Sơn Island was literally the last stop on a journey that began with their arrest and incarceration on the mainland. Their crime? Resisting the foreign invader du jour and fighting for their country’s independence and unification. In addition to execution, causes of death included disease and torture.

The French built the Côn Đảo prison complex in 1861 to hold political prisoners and handed it over to the South Vietnamese government in 1954. It was a political Alcatraz on steroids, with inhuman living conditions, barbaric torture methods, no escape and, for many, no survival. The US and its client state collaborators honed this hell on Earth to dystopian perfection.

As with the French colonialists before them, the prisons continued to be used by the South Vietnamese government as a secure and isolated place to hold, interrogate, and torture its political prisoners – with the full cooperation, collaboration, and support of its US benefactor.

What most of the world knows about Côn Sơn Island is the result of a congressional fact-finding mission in July 1970 that included two U.S. Congressional representatives, Augustus Hawkins (1907-2007) and William Anderson (1921-2007), accompanied by Tom Harkin (1939-), then a congressional staffer and later a US senator, translator Don Luce (1934-), and Frank Walton (1909-1993), USAID Office of Public Safety director and prison adviser.

Don Luce, who had lived and worked in Vietnam since 1958 for International Voluntary Services, an NGO that was the model for the US Peace Corps, and the World Council of Churches, recalled the visit in an article he wrote entitled The Tiger Cages of Viet Nam from which this information is excerpted:

On the way out Frank Walton, the U.S. prison advisor, described Con Son as being like “a Boy Scout Recreational Camp.” It was, he said, “the largest prison in the Free World.”

We saw a very different scene when we got to the prison. Using maps drawn by a former Tiger Cage prisoner, we diverted from the planned tour and hurried down an alleyway between two prison buildings. We found the tiny door that led to the cages between the prison walls. A guard inside heard the commotion outside and opened the door. We walked in.

The faces of the prisoners in the cages below are still etched indelibly in my mind: the man with three fingers cut off; the man (soon to die) from Quang Tri province whose skull was split open; and the Buddhist monk from Hue who spoke intensely about the repression of the Buddhists. I remember clearly the terrible stench from diarrhea and the open sores where shackles cut into the prisoners’ ankles. “Donnez-moi de l’eau” (Give me water), they begged. They sent us scurrying between cells to check on other prisoners’ health and continued to ask for water.

Some of the Harkin’s photos and a story were published in the July 17, 1970 edition of Life magazine. The tiger cages, constructed by the French in 1940, included 60 cells with no ceiling that were used to torture prisoners by making them “sunbathe” in the searing tropical sun. Their tormentors routinely poked sticks through the bars, beat the prisoners, threw lime on their open wounds, and urinated on them.

Luce’s reward for his pivotal role in bringing these atrocities to the world’s attention was to have his mail privileges revoked by the US Embassy in Saigon, be put under surveillance by the police, including one attempt on his life (death by snakebite) and, finally, be expelled from the country less than a year later.

In early 1971, new tiger cases were built by Morrison-Knudsen Corp. and Brown and Root Company under a $400,000 ($2.7 million in 2021 US dollars) contract with MACCORDS (Military Assistance Command Civil Operations for Revolutionary Development Support), the US paramilitary economic aid program in Vietnam.

Read the rest at CounterPunch