Photo: Pham Vinh Cat, 80, at home in his village, Le Hong in Hai Duong Province, where he lives with his wife. A nurse during the Tet offensive in 1968, he treated thousands of wounded soldiers in Danang.Credit Nick Parisse/Dawning

This article originally appeared in the NYTimes.com

“I never talk about the war. Nobody asks. People don’t want to hear about it.”

A North Vietnamese war veteran sat in his living room and began to remember the events of 50 years ago.

His wife was next to him. Around them were four interviewers, note takers and a Vietnamese interpreter. Several Communist Party officials, police officers and government representatives sat silently in the background, listening to stories they had never heard before.

That’s a scene that my colleagues and I saw repeated more than 100 times in a three-year effort to document the lives and memories of North Vietnamese veterans and their families in the past several years.

Americans know very little about their old enemy. They rarely hear stories from the other side. In this year of reflection on the events of 1968 — both in Vietnam and the political ramifications that saw a very divided country back home — it is crucial to listen to these voices. 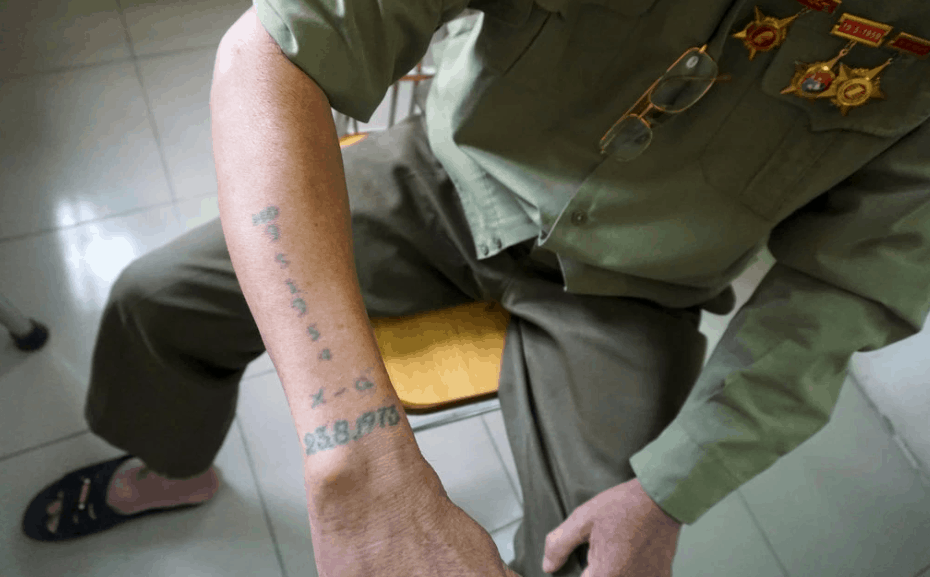 In order to identify their bodies if killed in action, North Vietnamese soldiers often had their personal information tattooed on their arms. Credit Rafe H. Andrews/Dawning

In Vietnam, many veterans and their families seek some kind of closure, so many decades after the war. Speaking about their experiences is one way they hope to do that. Now, at the end of their lives, the North Vietnamese veterans we met showed a genuine need for reconciliation with their former enemies here.

It may still take many years for the Vietnamese public to learn about the memories, hopes and dreams of those who fought for Hanoi against America. It will take even longer for them to learn about those who fought for South Vietnam. The war is a taboo subject, particularly for younger generations. But talking about it is one way to lessen the taboo:

On the first days of the Tet offensive, Nguyen Nhu The led a small team to destroy a crucial bridge. During the operation, his team was killed. He was shot in the leg and captured by American troops; he was held in multiple prisons until 1973. 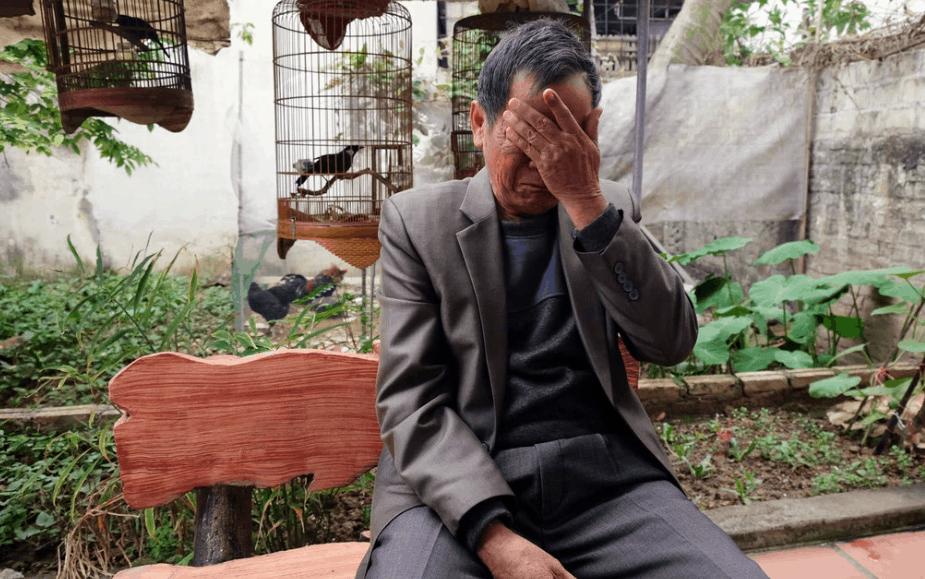 Nguyen Nhu The, 73, at home in his garden in Hai Duong, Hai Duong province.CreditPhilip Penta/Dawning

‘The worst conditions were at the prison on the island of Phu Quoc. I was starved, beaten and tortured. They hit me in the legs with water pipes and hung me from my arms for 24 hours at a time. I lost my hair. Things only improved after a team of Americans came to investigate the prison conditions.’ — Nguyen Nhu The

Phan Huy Thong’s unit tried to seize the military academy in Quang Trung near Saigon; 120 of the 480 soldiers were killed. In 1974, an artillery shell blew off his left leg during a firefight near Cu Chi, ending his military service. 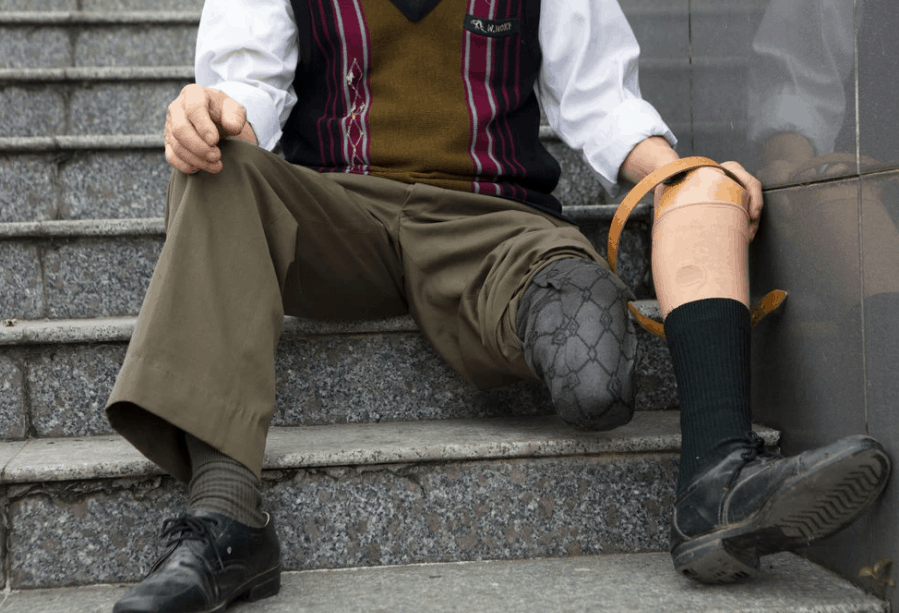 Phan Huy Thong lost much of his leg to an artillery shell in 1974.CreditNick Parisse/Dawning

Pham Dinh Rong’s main role during the war was to transport goods and weapons along the Ho Chi Minh Trail, which was constantly bombed. During the Tet offensive, he was stationed in Hue, the scene of one of the bloodiest battles during the conflict. 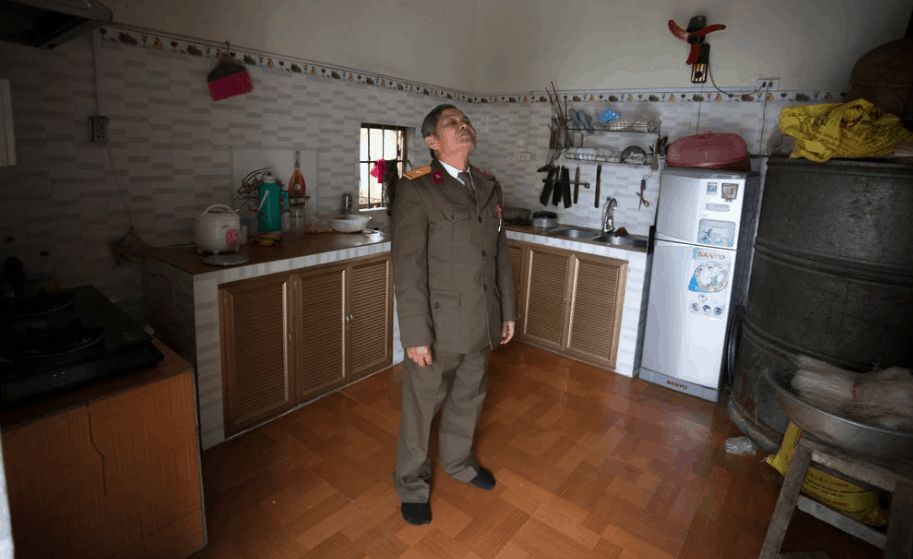 ‘There were a lot of helicopters roaring in the sky in Hue. A smoke bomb landed near us. The gray smoke blinded us. We could not breathe. We had to hold wet tissues to our noses. We were hungry. I could only hear the roar of the helicopters and the sound of the shootings.— Pham Dinh Rong

Nguyen Van Bien, now 73, enlisted in a North Vietnamese artillery brigade with which traveled on foot for over a month to reach a final encampment in Laos. There he lost the outer three fingers of his right hand and sustained wounds to his neck and jaw while being shelled by American troops. 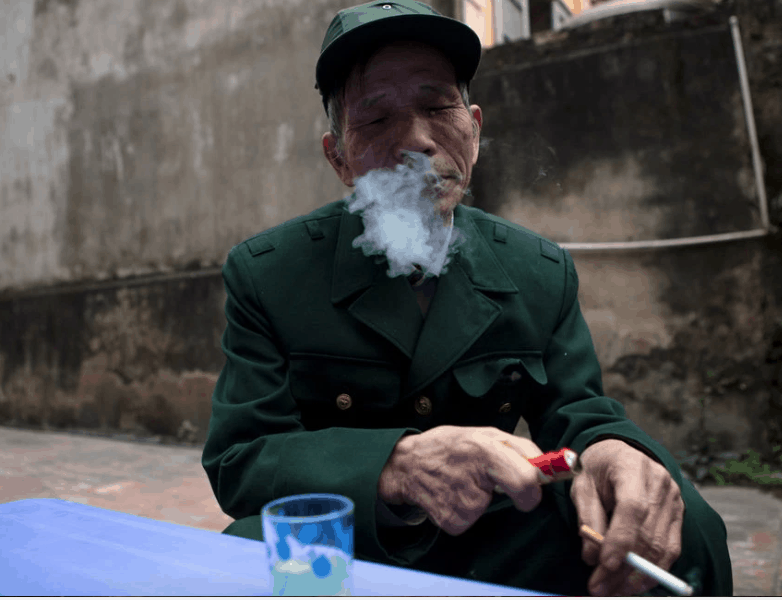 ‘Forgiveness is important. But it’s easier to forgive when you don’t see your enemy face to face.’— Nguyen Van Bien

Pham Thi Phuc married Tran Huu Naghi, a decorated North Vietnamese soldier who was shot through the neck and sprayed with Agent Orange during the Tet offensive. Of their four children, two suffer severe health problems. 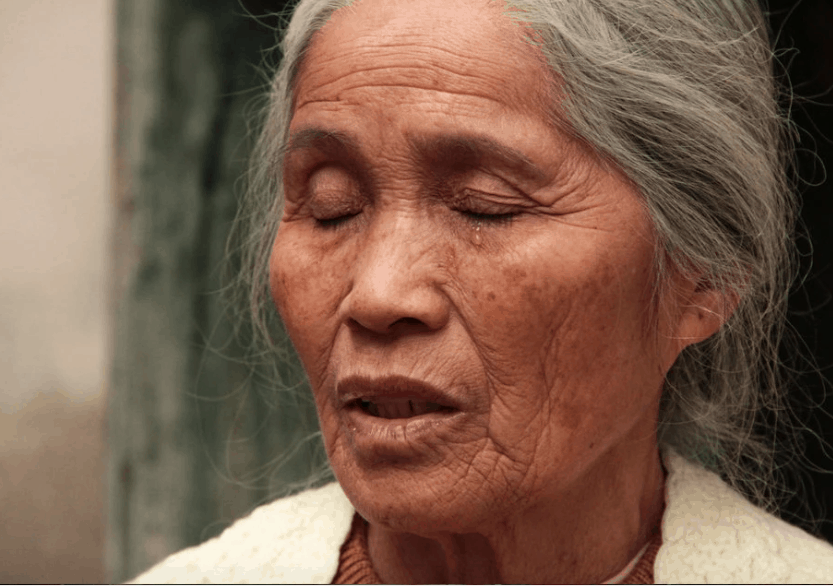 ‘The effect of Agent Orange on my children has broken my heart. One was born with a cleft palate and her jaw doesn’t line up. People are afraid of her and tell her she shouldn’t speak at all. My second daughter was abandoned by her first husband because she could not conceive.’— Pham Thi Phuc

Pham Van Ti assisted in the transportation and storage of weapons during the Tet offensive in the battle of Quang Tri. While transporting weapons, his team was attacked by an American unit, and he lost five comrades. His memory was affected heavily by the trauma of the war. He now lives at home with his wife, tending to their garden and raising chickens. 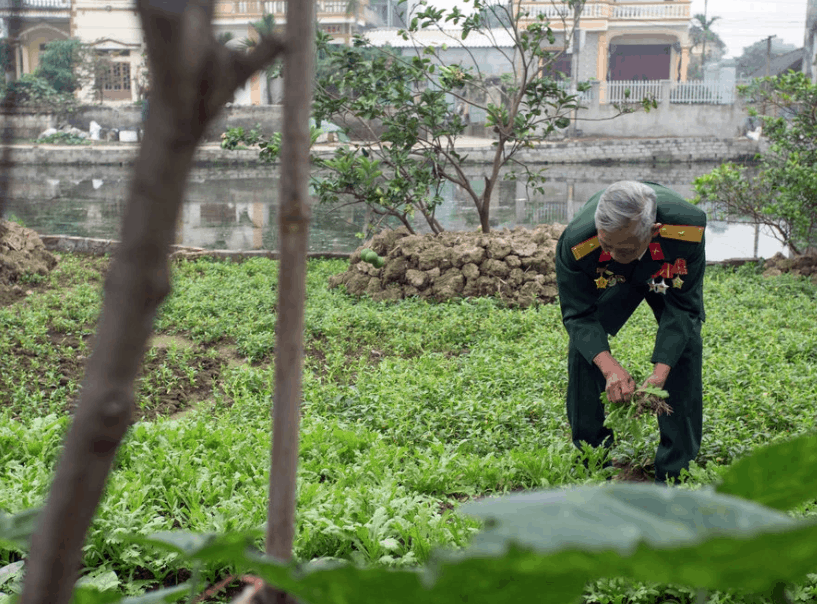 ‘I have come to appreciate the normal daily life we have here. I do everything with my wife. I am grateful to be living a life of simplicity.’— Pham Van Ti

Vu Van Liet served in the North Vietnamese Army for nine years, leaving his wife and five children behind. 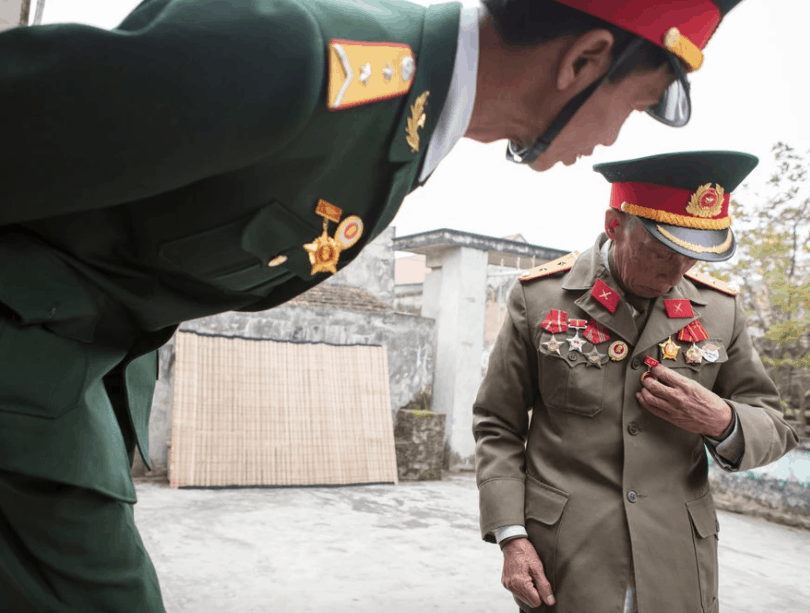 ‘During my first three years of service, I was able to receive letters from my wife. But as the fighting intensified, I lost contact with her for the next six years. I didn’t know if she and my children were alive. When I returned home, I was so relieved. She had raised our five children alone with the help of her sister and my mother, but I hardly knew them anymore.’— Vu Van Liet

The first day of the Tet offensive, Vu Dinh Dang was part of a team of soldiers that took a citadel in Binh Dinh Province. He was wounded during the fourth day of fighting. After seven days, they evacuated the citadel. His unit had lost 150 men. His wife, Pham Thi Phinh, lost her brother in a battle in Quang Ngai. The couple said they are still looking for his body. 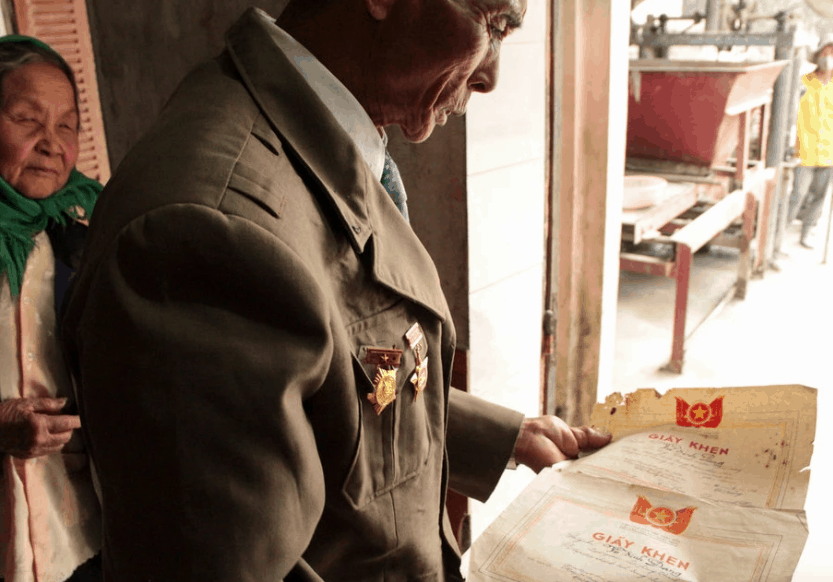 ‘Not finding my brother’s body has devastated our family. We’ve gone back to the field that he was killed in, but we cannot find him. I want to find his body and bring him to our cemetery because he belongs to our village.’— Pham Thi Phinh

The Vietnamese government keeps a tight grip on its version of history, the winners’ side of the story. In Vietnam today, as in many other countries that are healing from civil war, peace seems more important than truth. 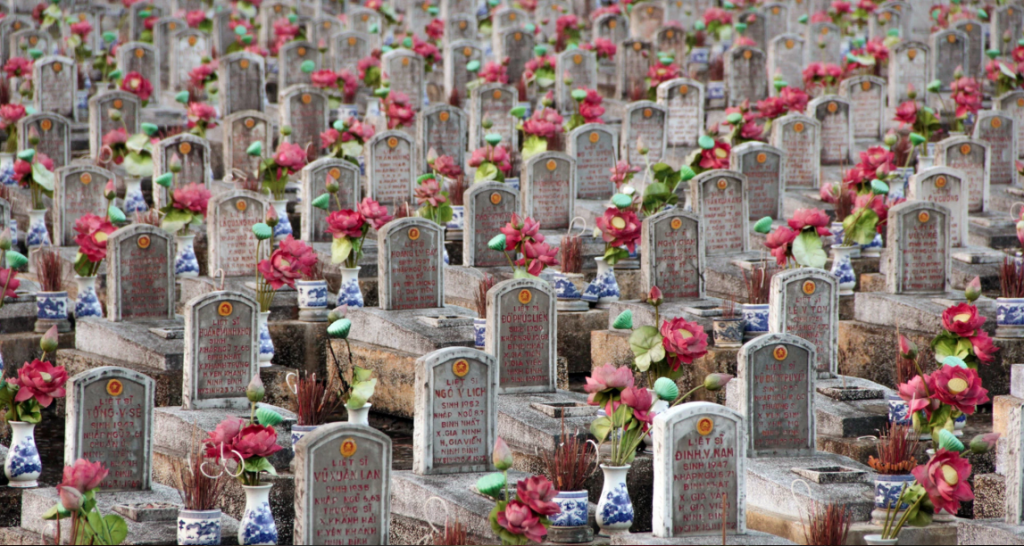 The Truong Son National Cemetery in Quang Tri. It’s one of the largest cemeteries for North Vietnamese and Vietcong soldiers, with over 10,000 graves.Credit Susanne Ruttinger/Dawning

Nguyen Manh Hiep, 69, has converted his house on the outskirts of Hanoi into a museum of war memories — one of the most important private collections in the country. He was a captain for the North Vietnamese Army at the Battle of Hue in 1968 and was wounded. His collection includes Vietcong black plastic sandals, United States Air Force helmets, letters and pictures, but the most precious object to him is a green cotton blanket that he used during his convalescence in the jungle. 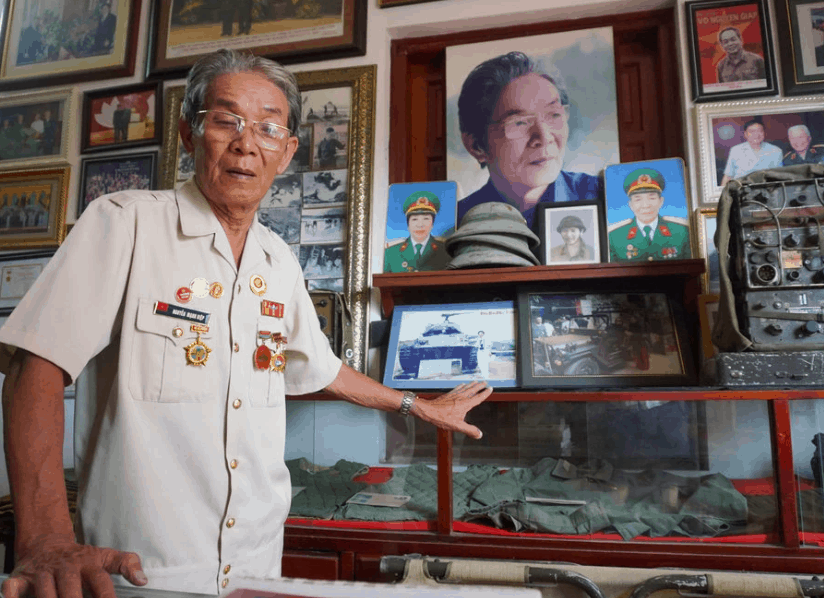 Nguyen Manh Hiep at his house on the outskirts of Hanoi. Credit Raul Roman/Dawning

“Young people in Vietnam don’t want to learn about the war,” he said. “It’s difficult for us to talk about it. Vietnam has moved on.”

Raul Roman is the founder and executive director of Dawning, an investigative journalism organization focused on global development and human rights.